Another disturbing chapter of the Kardashian story is being written as Lamar Odom was found unconscious in a Nevada brothel and is now fighting for his life.

Lamar Odom, the NBA player who is mostly known to be Khloe Kardashian’s husband, was hospitalized after he was found unconscious in the Love Ranch, a brothel in Nevada. According to news sources, Odom took cocaine and over 10 supplement pills over three days and was found with “blood coming out of his nose and white stuff coming out of his mouth”.

According to the owner of the Love Ranch Dennis Hof, Lamar attended the brothel because he wanted “to get far away from something.”

Here is Hof’s version of the events:

“Two women at the brothel went to check on Odom and found him unconscious,” he said. “They immediately call 911, and dispatch tells the girls to roll him over on his left side and (he) starts to puke. He was totally unconscious. The girls and staff rush him out on the ambulance. The police didn’t find any illegal drugs on him.”

He added, “To my knowledge, there were no drugs involved. Lamar was eating well and was just healthy.”

The site manager of the brothel told CNN that when he arrived in the room the former athlete was on his right side and wouldn’t wake up when people shook him.

Richard Hunter said Odom was snoring loudly, had his eyes closed and was unresponsive, so he called 911.
– CNN, Lamar Odom had been using cocaine, brothel employees say

According to site manager Richard Hunter, two women, who had been with Odom earlier, handed him a bottle of a legal herbal supplement that is sold at the brothel.

At the time of writing this article, Odom is on life support in Sunrise hospital in Nevada. Khloe Kardashian is currently taking medical decisions on his behalf.

While we do not have all of the facts concerning this tragic event, the words “overdose” and even “suicide attempt” are being thrown around in mass media. However, I would not rule out him being poisoned as we’re looking at a Whitney Houston-like situation here.

First of all, Odom was given two bottles of “herbal viagra” by two women who worked at the ranch. How easy would it be to slip something in there?

Second, Lamar and Khloe signed divorce papers in July, meaning they are split up. Another proof that the couple was definitely over is that Lamar was in a brothel having sex with prostitutes for three days. Despite these facts, Khloe is in charge of medical decisions, claiming that the “divorce is not final”. Isn’t this situation strange and bizarre? If I was in the process of divorce and was found in brothel, I wouldn’t want my ex-wife, who is related to a elite-controlled family, calling the shots. I am however not saying that Khloe is behind any of this – I am saying that those who control the Kardashian family are shady and bent on sacrifices.

Why would “they” want Odom dead? I am not sure. We do know that he was on his way out of the family. Strangely, all of the men who were in contact with that family end up truly messed up. Just hours after Odom’s hospitalization, sources reported that Scott Disick was in rehab for drugs and alcohol abuse. 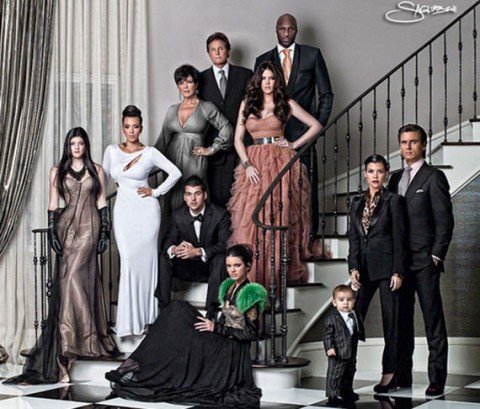 How many men in that Kardashian Christmas card are still “in the picture?”

It is currently too early to conclude anything and I hope that Lamar will recover. However, when you get involved with a family that is controlled by the occult elite, bad things often happen. Watch out Kanye.

Related Topics:kardashianslamar odom
Up Next