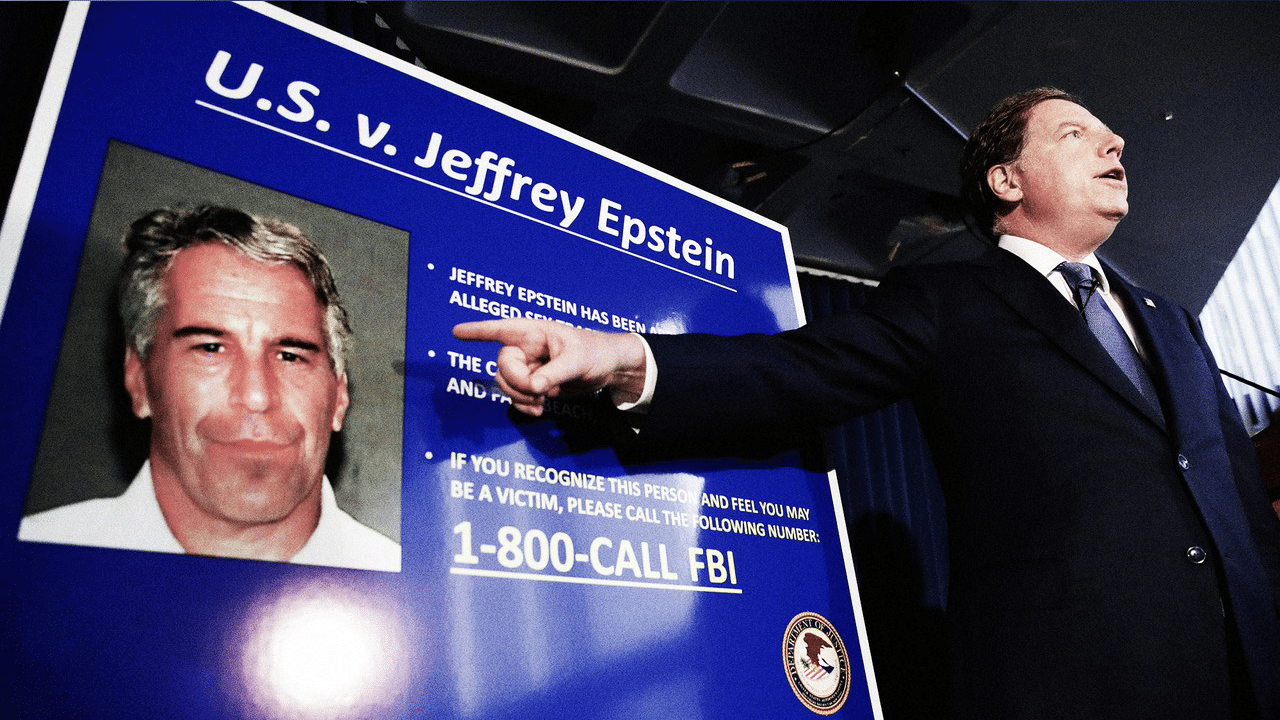 The arrest of Jeffrey Epstein for child trafficking has explosive potential and (if important information is revealed to the public) could expose the true face of the elite to the world. The list of powerful people linked to Jeffrey Epstein and his infamous “Lolita Express” is as long as it is staggering. Combined with the systematic recruiting and exploitation of minors for the pleasure of powerful people, the case could convince lots of people that “pedogate” is all too real.

Due to the potentially explosive nature of this case, both sides of the political spectrum are already hard at work spinning the story to favor their side. However, this case has absolutely nothing to do with “conservative” and “liberal” and everything to do with the “elite”. From heads of state to members of royal families while not forgetting, celebrities, socialites and CEOs of large companies, members from all branches of the elite gathered to celebrate extreme depravity. But now Epstein is under arrest and the parties stopped. Now, one question remains: Will the entire disgusting truth Epstein’s parties come to light or will the elite cover its tracks while throwing Epstein under the bus?

What We Already Know

Jeffrey Epstein is a financier who amassed, according to court documents, an “extravagant amount of wealth”. Although most of his fortune is hidden in offshore tax havens, sources believe that he is (or once was) a billionaire.

Along with this wealth came a great amount of power and influence. His famed “little black book” contained the names of over 1000 high-level individuals in all fields of society. Epstein was also part of two of the most powerful organizations of the world: The Council on Foreign Relations and the Trilateral Commission. Both of these entities gather the world elite to decide the policies that shape the world as we know it. The Trilateral Commission was once accused of being a

“skillful, coordinated effort to seize control and consolidate the four centers of power: political, monetary, intellectual, and ecclesiastical (…) in the creation of a worldwide economic power superior to the political governments of the nation-states involved”.
– With No Apologies,  Senator Barry Goldwater

The Trilateral Commission was founded by David Rockefeller. Interesting fact: Epstein was also on the board of Rockefeller University.

In the early 2000s, Epstein organized lavish parties at his homes in Manhattan and Palm Beach where lots of socialites, celebrities, and politicians were in attendance. There were also lots of underage girls. Epstein’s friend also flew on his private jet to parties in remote locations. The jet was dubbed the “Lolita Express” because it lead the elite to underage sex slaves.

In 2005, after the parent of a molested 14-year old girl complained to the police, Epstein pled guilty and was convicted in a Florida state court in 2008 of soliciting a prostitute and of procuring a 17-year-old girl for prostitution. He served 13 months in “custody with work release” as part of a plea deal where federal officials had identified 36 victims.

Epstein’s “Little Black Book” contained the names of over 1000 people ranging from close friends to peripheral contacts from the worlds of politics, business, the media and European high society.

Epstein was also close friends with billionaire Leslie Wexner who is the founder of Victoria’s Secret. According to this article, the pipeline between Victoria’s Secret and Epstein led to the abuse of countless models.

Epstein was arrested again on July 6, 2019, on federal charges for sex trafficking of minors in Florida and New York.

Shortly after the arrest of Epstein on July 6th, mass media sources immediately linked Donald Trump to the financier. 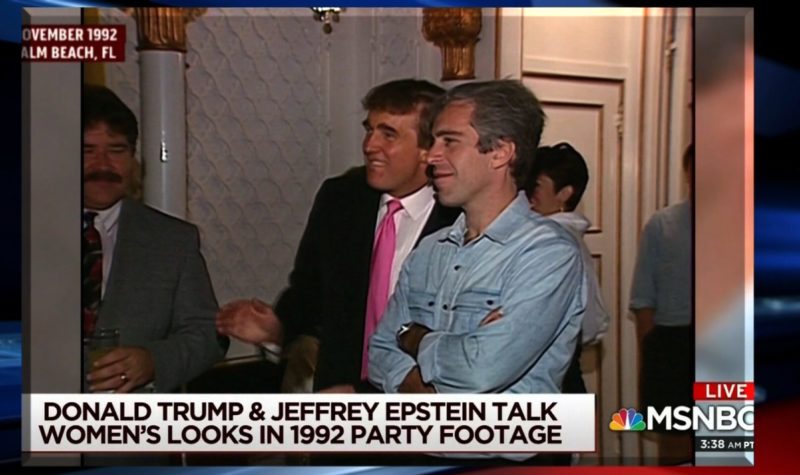 Shortly after the arrest of Epstein, NBC News unearthed a video from 1992 showing Donald Trump discussing with Epstein in Florida.

In his most extensive known public comments about Epstein, Donald Trump told New York magazine in 2002:

“I’ve known Jeff for fifteen years. Terrific guy. He’s a lot of fun to be with. It is even said that he likes beautiful women as much as I do, and many of them are on the younger side. No doubt about it – Jeffrey enjoys his social life.”

In July 2019, Trump’s opinion of Epstein switched drastically. He claimed that he knew him “like everybody in Palm Beach knew him.” He also added on several occasions that he had not been “a fan” of Epstein and that he had not spoken to him in about fifteen years.

By 2007, Epstein was reported to have been banned from Trump’s club. The ban allegation was included in court documents filed by attorney Bradley Edwards.

Another fact that might cause Trump some grief: His current labor secretary Alex Acosta played an important role in ending the investigation against Epstein. In 2008, as a U.S. attorney in South Florida, Acosta brokered a plea agreement with Epstein that allowed him to escape serious punishment for earlier allegations of sexual misconduct.

While there are undeniable links between Trump and Epstein, the relationship between Bill Clinton and Epstein is much more involved. Flight records show that Clinton flew on Epstein’s plane at least 26 times to about a dozen international locations. Flight logs did not list any secret service detail for five flights. Epstein was also involved in some of Clinton’s projects: He was a heavy donator of the Clinton Foundation. According to attorney Gerald B. Lefcourt, Epstein was also “part of the original group that conceived of the Clinton Global Initiative”.

If the Epstein trial began digging into the links between the Clinton Foundation, its involvement in Haiti and the Lolita Express, a proverbial can of worms might be pried open. Another can of worms that is begging to be pried open: Epstein’s Private Island.

The Secrets of Epstein Island 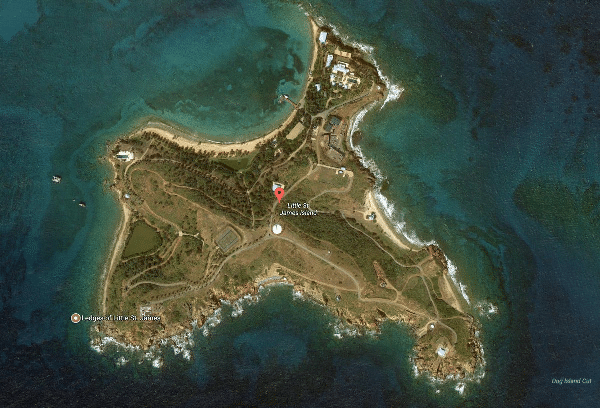 Located in the U.S. Virgin Islands, Little Saint James is Jeffrey Epstein’s primary residence since its purchase in 1998. It did not take long before the island earned a disgusting reputation.

According to most researchers, Little St. James is the epicenter of the Epstein scandal. It is believed that a great number of rich and powerful people flew to this remote island to abuse an apparently endless supply of minors who were allegedly provided by a team of traffickers.

A closer look at the island reveals some strange details that are begging to be further investigated. Everything on the Island appears to be custom-built to cater to the occult elite’s extreme brand of depravity. 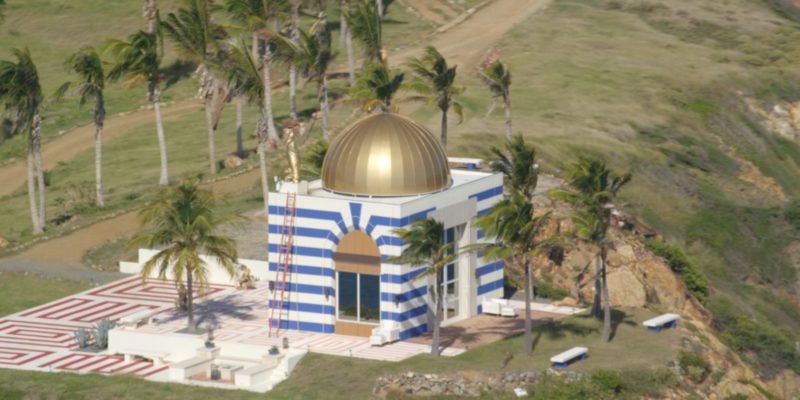 A picture of the mysterious “temple” that was built of Jeffrey Epstein’s private island.

The fact that a “temple” was built on an island known for extreme depravity is disturbing. However, when one fully understands the mindset of the occult elite, it makes perfect sense. It is all about symbolism and ritual.

For instance, the “temple” has a striking resemblance with Hammam Yalbugha – a Mamluk-era public bath located in Syria. 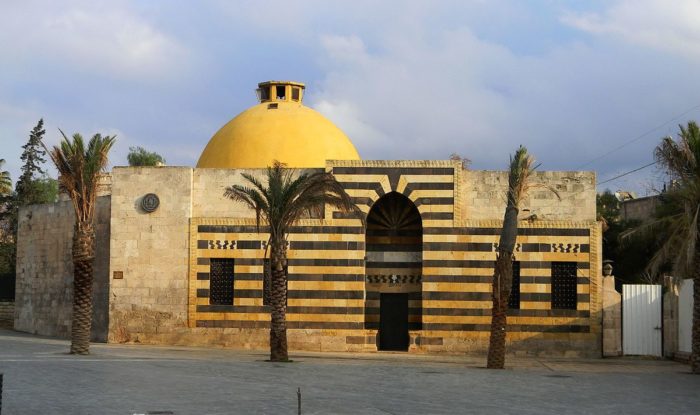 Hammam Yalbugha in Aleppo, Syria. It was built in 1491.

Why did Epstein model his “temple” on this specific building? Because of the symbolism attached to it. Indeed, the hammam is a classic example of architecture from the Mamluk era. In Arabic, the word “mamluk” literally means “property” and is used to designate slaves.

During the Mamluk era, children were captured by the ruling class to become slaves. Boys were usually trained to become soldiers while girls were groomed to become the personal concubines of their masters. Considering the fact that Epstein island was used to import child sex slaves for the elite, the symbolism is perfectly fitting.

In order to give the “temple” an unmistakeable occult dimension, the building was adorned with golden statues representing gods (Neptune) and owl-like birds. The building is also surrounded by maze-like patterns, similar to those found in Islamic architecture.

To get a better feel of Epstein island, I suggest you view this drone footage which provides great shots of some truly bizarre elements.

One detail that urgently needs investigating is the possible presence of underground tunnels.

Drone footage reveals that the temple is located on a 60 feet-elevation. Right underneath it appears to be a tunnel entrance. 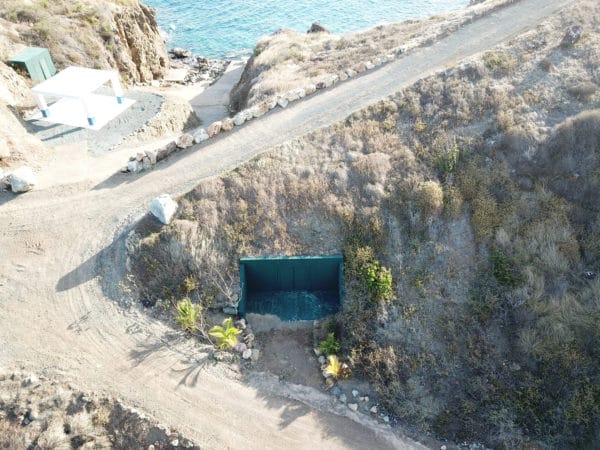 Other drone footage reveals the existence of several entrances.

This is where theories get extremely dark. Some sources claim that an elaborate system of tunnels was built underneath the surface of the island – and this is where the most horrific child abuse takes place.

At the center of the island is a creepy sundial that is replete with bizarre details. 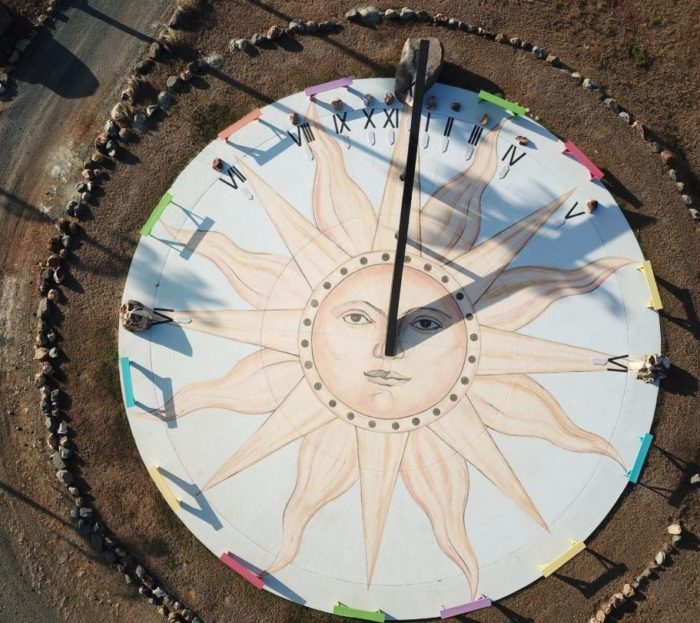 The sundial is surrounded by benches. Who sits there and why? Are they part of some kind of ritual? A large flat rock was placed on the number XII.

The design of the solar face on the sundial is also extremely symbolic. It is near-replica of the head of the “Masonic Man” as depicted in classic Masonic documents. 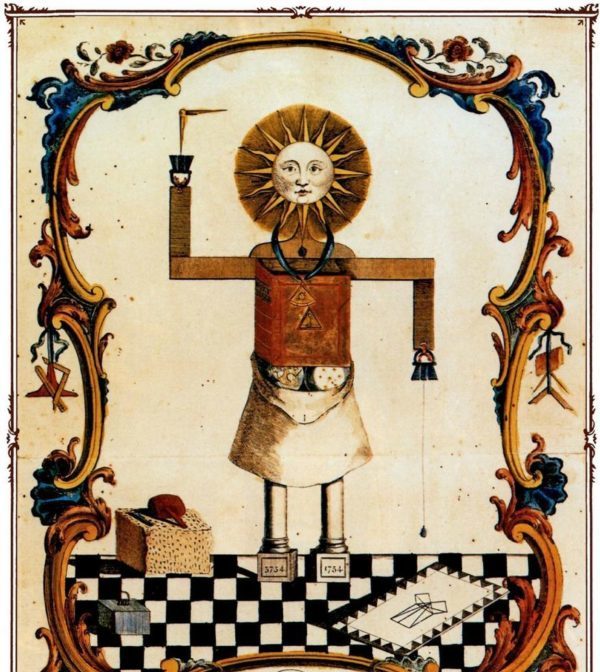 A classic Masonic lithograph depicting the “Masonic Man”. The solar face is nearly identical to the sundial on Epstein Island.

A thorough investigation of Epstein Island would most likely lead to some extremely disturbing discoveries. However, as this recent drone footage reveals, the “temple” appears to be undergoing some “renovations” (various tools can be seen through the window) while the golden dome and other golden statues are gone. According to Qanon, Epstein has spent over $29 million to bury the underground tunnels underneath the island.

Is the elite desperately trying to cover its tracks while scapegoating Epstein? Mass media appears to be already whitewashing the truth. Some news sources are already putting out articles (such as this one) stating that the “temple” was actually Epstein’s gym.

The Epstein case has the potential of blowing up in the face of the elite. According to “liberal” media, the case could link Donald Trump to Epstein and cause him great harm in the next elections. According to “conservative” media, the case could finally put to light the deep association between the Clintons and Jeffrey Epstein while revealing the shady child trafficking network that was fronted by the Clinton Foundation.

However, for truth seekers with no political agenda, this case is the occasion of exposing the evil, depraved and sadistic mindstate of the occult elite, which takes pleasure in stealing the innocence of children while flaunting its symbolism to the world. Will the dark secrets of Epstein Island and the occult elite be finally revealed to the world? Or will mass media filter and censor the information that will go against the interests of its elite owners?

Netflix is Losing Subscribers in the US: The Untold Reason