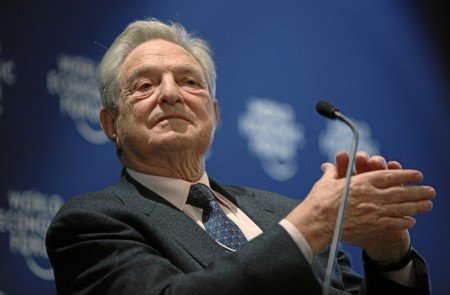 George Soros is a Hungarian-American financier, a prominent member of the world’s elite, who is an important actor in the shaping of a New World Order. This former member of the Board of Directors of the Council on Foreign Relations (CFR) has supported and funded numerous organizations and policies enabling globalization. He has funded Obama’s campaign and regularly visits the White House to ensure that his policies are being followed (which are in accordance with David Rockefeller’s).

The conference he is holding from April 8th to April 11th at Bretton Woods aims to discuss the “Reorganizing the world order” which  “will need to extend beyond the financial system”. Here’s an article on the subject from AFP.

Internationalist billionaire George Soros is holding his international conference April 8 to April 11 at Bretton Woods, N.H., the noted birthplace of the World Bank and the International Monetary Fund, where he plans to “rearrange the entire financial order,” as he noted in a November 2009 article in The Japan Times Online.

This “Bretton Woods II” comes along just as the Trilateral Commission will be meeting at the same time in Washington, D.C. With an apparent goal of creating nothing less than a new global economy, Soros is spending $50 million in New Hampshire to bring together up to 200 academic, business and government policy leaders under his Institute for New Economic Thinking (INET).

Soros chose this site because he expects his proposed reforms to be as radical as those promoted by British economist John Maynard Keynes, the much-praised “genius” of the original Bretton Woods project.

Keynesian economics have been portrayed as a cure to the Western world’s postwar devastation, in that governments were liberated of money creation restrictions imposed by the gold standard, even while global financiers controlled much of the world’s gold like they do now. Governments, under the new paradigm after the war, were encouraged to promote economic growth and macroeconomic stability by creating more debt-based money for everything that ailed the economy—debt that has brought most of the world’s economies to the brink of bankruptcy.

Now Soros comes along as the new Keynes to save the day by proposing another miracle solution to our problems, couched in lofty doublespeak such as “reform,” “cooperation” and “equal participation.” Soros is proposing the end of sovereignty as we know it.

“Reorganizing the world order will need to extend beyond the financial system,” Soros wrote in his opinion piece.

Soros is saying that a washed-up America should be replaced by a world government with a global currency under UN rule. He also advocates that China should be top dog while we play second fiddle. What Soros doesn’t say is that two decades of outsourcing U.S. industry, opening the borders and bankrupting the economy with pointless wars and other debacles have been intentionally orchestrated so that now international bankers can tell the world the system is broken and that the individuals who broke it need to show us how to fix it.

Georgy Schwartz, aka George Soros, is a Hungarian Jew who has been described as anti-God, anti-family and anti-American. By his own admission he even helped confiscate the homes of fellow Jews in Hungary in 1944.

In an interview with Steve Kroft of 60 Minutes he said 1944 was the best year of his life. Asked by Kroft if he felt any remorse, he answered, “No, not at all; I rather enjoyed it.”

Soros made his first billion as a currency speculator in 1992 by shorting the British pound and causing misery to millions of hardworking British citizens. He went on to cause the 1999 Russiagate scandal, almost collapsing the Russian economy. It was described as “one of the greatest social robberies in human history.”

He did the same to Thailand and Malaysia in 1997, causing the Asian financial crisis of that time. Malaysian Prime Minister Mahathir Mohamad called him “a villain and a moron,” while Thailand’s PM referred to him as “Dracula.” He also helped dismantle Yugoslavia and caused major trouble in Japan, Indonesia, Georgia, Ukraine and Burma by raiding their economies.

At 81, taking down America appears to be his final challenge. “The main obstacle to a stable and just world order is the United States. The time has come for a very serious adjustment,” he said.