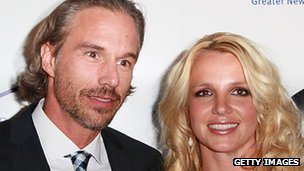 We’ve seen in previous posts that Britney Spears shows signs of being a mind control victim and that some people close to her may actually be her handlers. Jason Trawick, Britney’s manager who recently became her fiance (hint), has asked to be Britney’s co-conservator, meaning that he would have legal control over several facets of Britney’s life. The singer’s father is currently her conservator and is in charge of all things Britney, including her finances as she is deemed psychologically unfit to do so herself.

If accepted, Trawick’s request would grant him legal powers over Britney’s life on details such as food, clothing and medical care. If many artists have handlers in their entourage, Britney’s case is somewhat special as it is particularly obvious. How come Britney is deemed unfit to take care of basics such as food and clothing but can still record songs and perform in shows? How come she is set to marry a man who will also be a legal guardian? Bizarre. Here’s a BBC article on Britney’s fiance’s request for co-conservatorship.

Britney Spears’ fiance has applied to become her joint guardian, according to US media reports.

The pop star’s personal and financial affairs have been under the legal control of her father since 2008, after a protracted public breakdown.

According to People magazine, her fiance Jason Trawick has now asked the court to make him a co-conservator.

If the request is accepted, the 40-year-old would have shared legal power over Spears’ general well-being.

This would include food, clothing and medical care – but not her financial dealings.

The couple were engaged in December 2011, on the night of Trawick’s 40th birthday.

He stepped down as her manager shortly afterwards, saying he would concentrate on plans to open an arts and entertainment division for Famos LLC – a company whose partners include Mick Jagger and Dave Stewart.

Jamie Spears was originally granted temporary conservatorship after his daughter was admitted to hospital for psychiatric treatment in February 2008.

Her lawyers originally tried to have the ruling overturned. But in October that year, the courts agreed the arrangement should continue indefinitely.

At the time, a judge ruled the singer was “susceptible to undue influence” and that continued oversight of her affairs was “appropriate” given the complexity of her financial situation.

One advantage of the ruling, as far as the pop star is concerned, is that it shields her from some legal action.

On at least one occasion, she has been spared from giving evidence in court because her conservators argued that she was not mentally competent to sit through the questioning.

Conversely, she will not be allowed to marry Trawick without the court’s approval.

News of Trawick’s application came from US websites People and E! News over Easter weekend.

Lawyer Jeffrey S Cohen, who is not directly involved with the case, told People: “This is probably a compromise between Britney, her father and Trawick to get the marriage off on the right foot.

“Obviously, her future husband needs to have a say in her well-being.”

The conservatorship will only be lifted once a judge rules that Spears is fit to manage her own affairs.

Related Topics:britney spears
Up Next

Megadeth’s “New World Order” and “We the People”: Metal With a Message