This ain’t no April Fools, all of the folllowing pics are real. In this edition of SPOTM: Industry veterans trying to stay relevant, newcomers showing off their puppet strings and more proof that the elite’s agenda is everywhere. 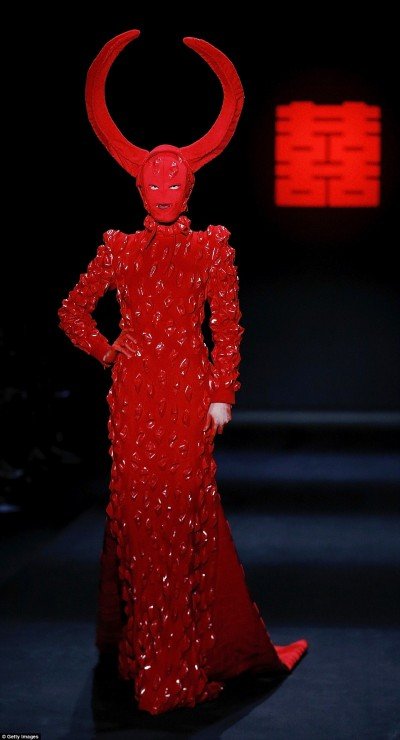 The fashion show by Chinese designer Designer Hu Sheguang was all about blood sacrifice, satanism and mind control imagery. In short, it was an unfiltered representation of the occult elite’s true face. In this pic, a masked model walking around with gigantic devil horns on her head. 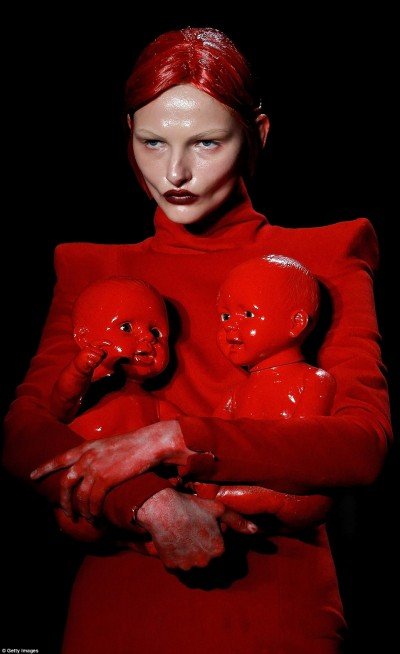 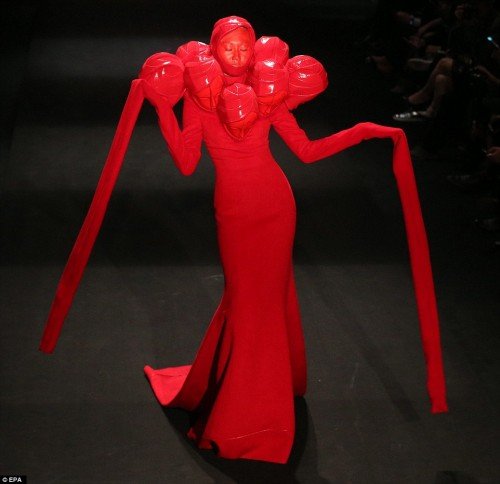 The multiple heads on this model represent the multiple personas of MK slaves. 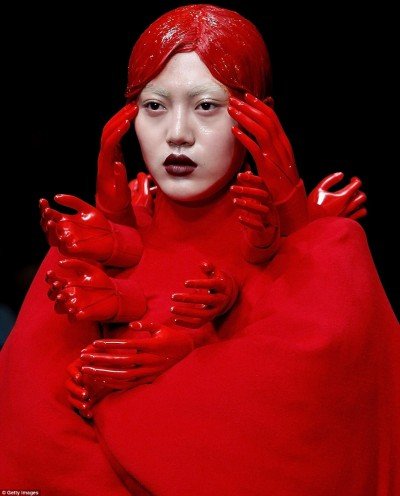 A bunch of hands on the model = Controlled by mind control HANDlers. 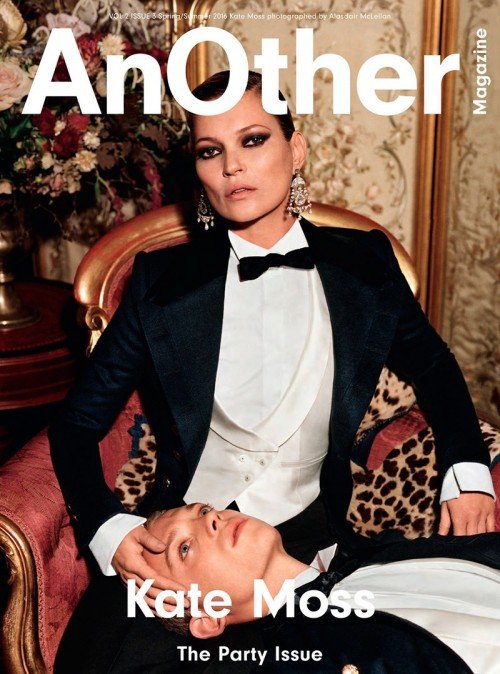 This Kate Moss photoshoot for AnOther magazine depicts in position of power over male sex slaves. It is all about Beta Kitten programming. 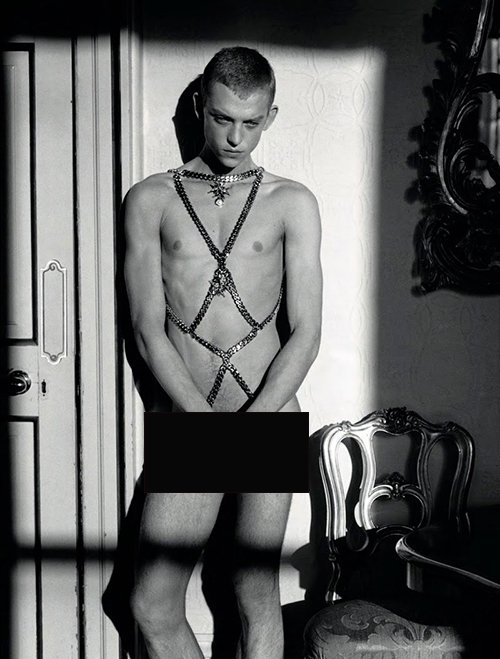 This slave, dressed in chains and attempting to cover his privates looks traumatized and completely out of it. Gotta love the fashion world. 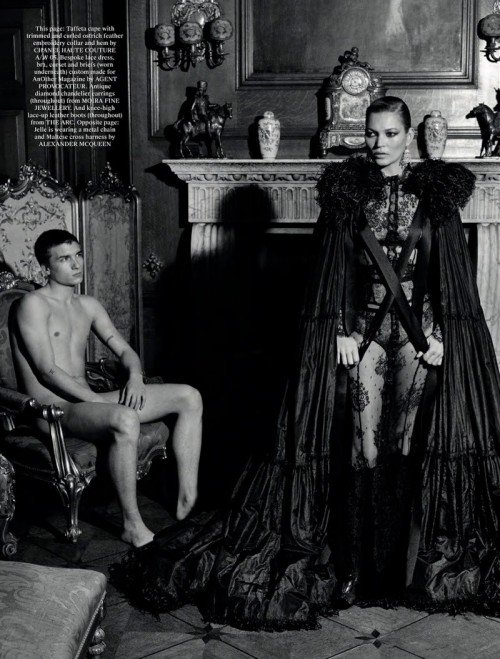 A caped Kate Moss, representing the “Mother of Darkness” in Monarch programming, casts a dark shadow next to a helpless, naked slave. 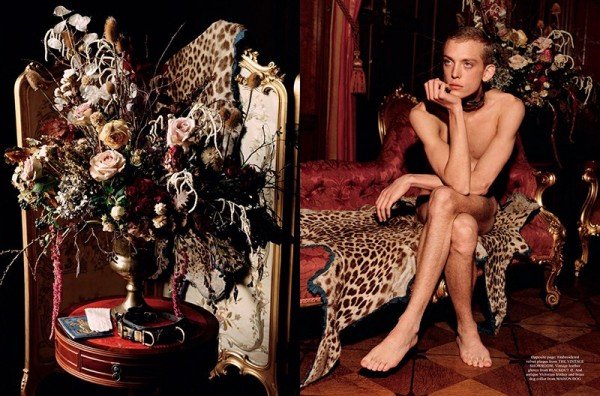 In MK symbolism, feline prints represent Beta Kitten programming. Combined with the collared, effeminate slave, this is all about the occult elite’s exploitation of Beta slaves – male and female. 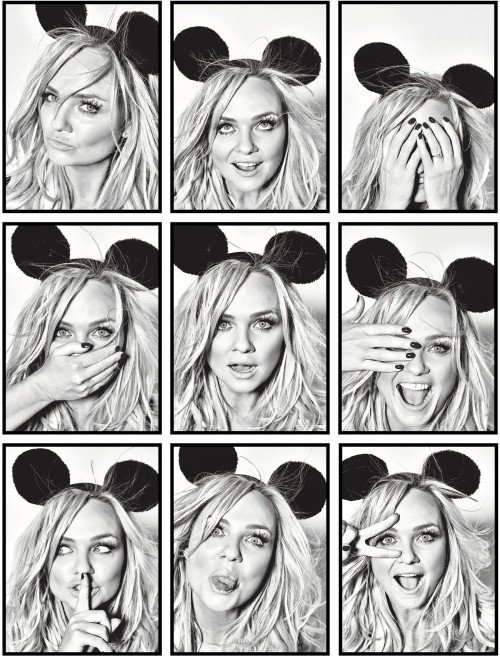 Emma Bunton aka Baby Spice is not a baby anymore. And, in order to get some of that sweet mass media spotlight, she needs to conform to the Agenda. In her photoshoot in Fabulous magazine, Emma wears Mickey Mouse ears (representing Mickey Mouse MK programming) and covers one eye a bunch of times (to make sure you understand the agenda). 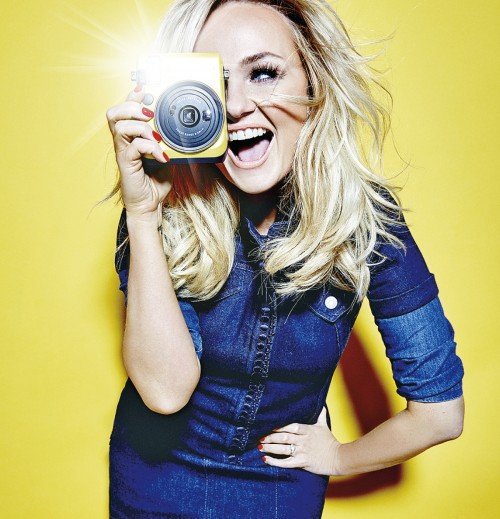 More one eye action to make sure you understand that this is all done on purpose. 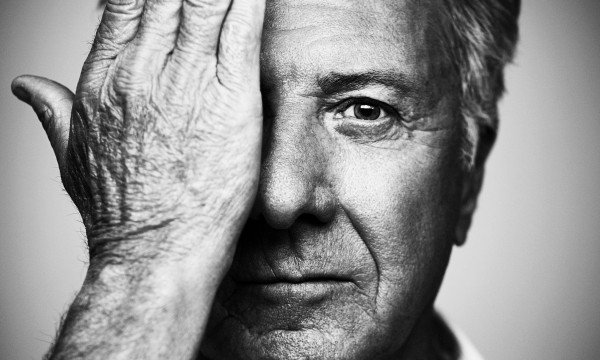 The Guardian recently did a cover story on veteran actor Dustin Hoffman and this is the picutre crowning the entire thing. In the article he states “I was an outsider, on the periphery looking in”. Not anymore. And that’s what you need to do to stay in. 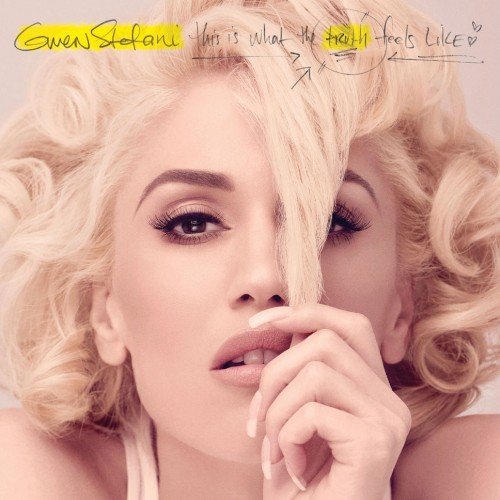 Gwen Stefani is another veteran looking to stay relevant. Most of the pictures associated with her new album feature her strategically covering one eye. 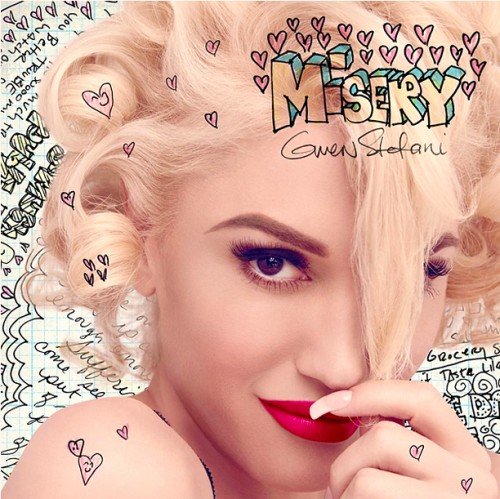 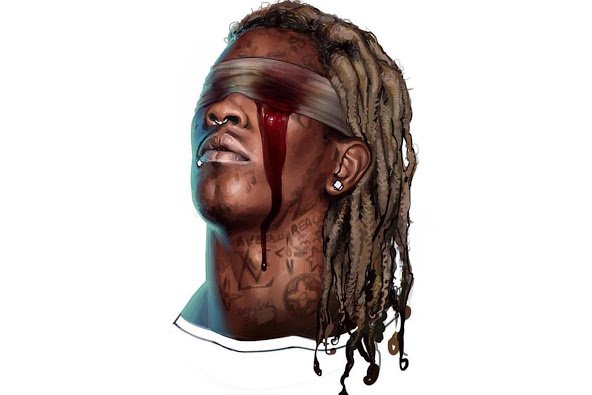 The cover of Young Thug’s Slime Season 3 mixtape depicts the rapper bleeding from one eye. A great way of representing being a pawn of the industry. 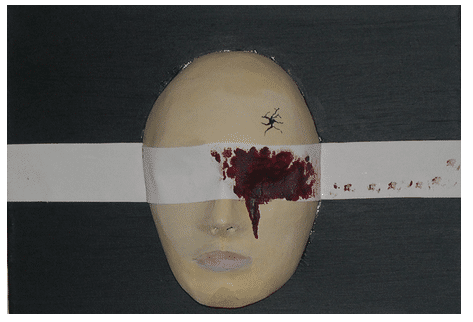 The above cover is strikingly similar to a sculpture by Kim Noble – a MK programming survivor with 13 alter personas – read my article about her here. 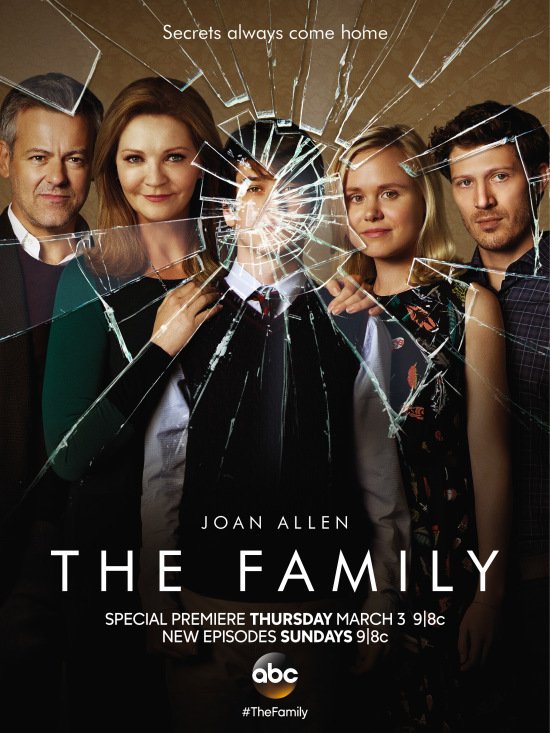 This ad for the new TV series The Family features broken glass strategically cracking around one eye of the main character – a young boy that is deranged and disturbed. I wouldn’t be surprised if the story ends up being full of Illuminati agenda. 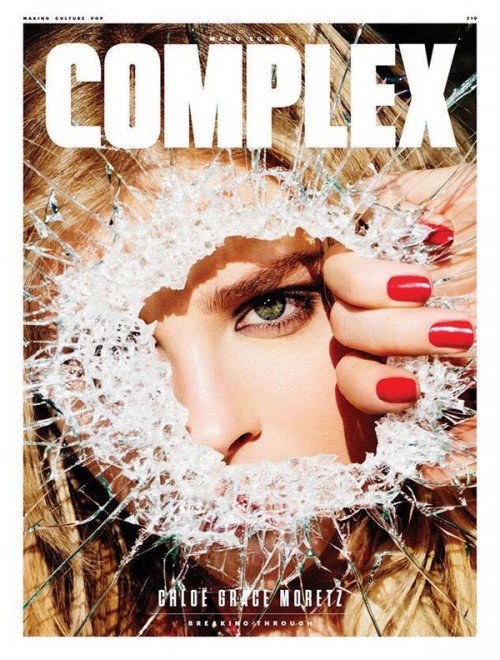 Following the same theme – One eyed Chloe Grace Moretz on the cover of Complex. 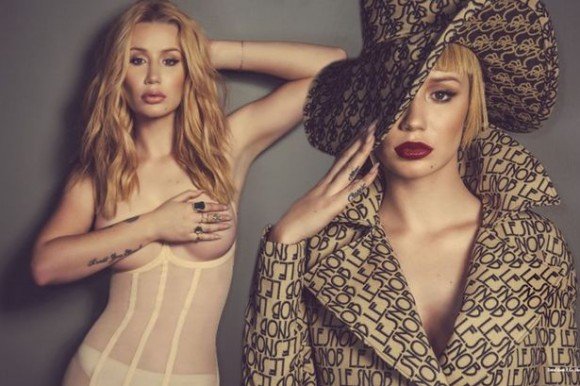 Iggy Azalea is doing what she can to stay in the biz: Showing skin and hiding one eye. Notice that I did  not mention making great music. 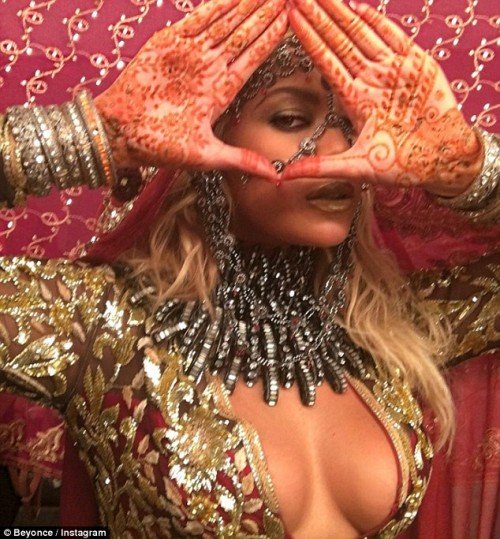 Beyoncé has been doing it for like a decade. She recently posted this to her 65.8 million Instagram followers. 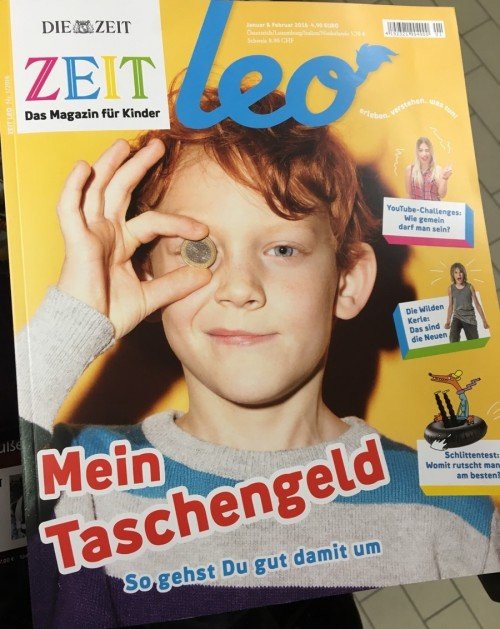 Prominent one-eye sign on the cover of the German publication ZEIT Leo – the ‘magazine for children’. Gotta get them young. 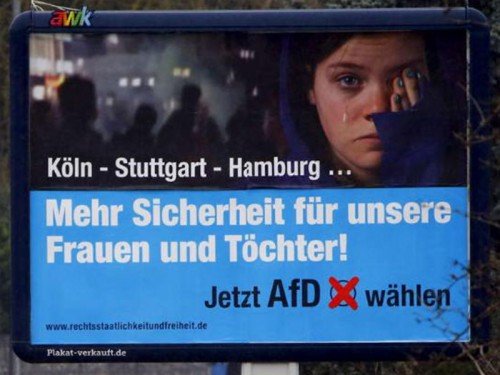 This campaign poster made by the he anti-immigrant Alternative for Germany (AfD) features a German girl crying and hiding one eye over the text “More security for our women and daughters!”. The popularity of this party is a result of the ongoing “race wars” Agenda – a growing crisis that is being purposely being manufactured through forced migration and false flag attacks. 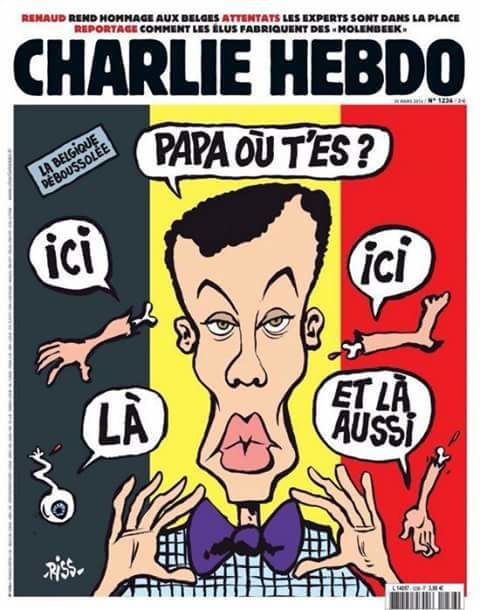 This is the post-Brussels cover by Charlie Hebdo. It features Belgian singer Stromae asking “Daddy where are you” while body parts fly around him. This is rather disrespectful to the people who died – it is almost mocking them. Another disturbing fact: Stromae’s father was dismembered in Rwanda. This is the second cover that proves that Charlie Hebdo – which was the target of a “terror attack” – is actually part of the Agenda.