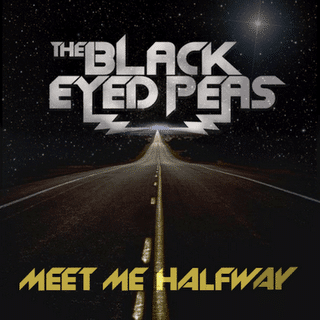 The Black Eyed Peas’ “Meet Me Halfway” is a catchy song with deceptively simple lyrics. A viewing of the video, however, reveals the song’s true meaning: a quest for spiritual enlightenment, based on esoteric teachings. This article looks at the occult symbolism of the song and the video and explains its spiritual meaning.

I’ve known of The Black Eyed Peas since they were an underground rap group struggling for recognition. Apparently tired of anonymity, the group recruited Fergie, a sultry R&B singer, and set their focus on the pop market. Their desire to appeal to the lowest common denominator produced pop gems such as the ode to idiocy Let’s Get Retarded (which later had to be changed to Let’s Get it Started due to complaints) and eventually launched them to super-stardom. My lack of tolerance for corniness caused me avoid the group for years, but some readers sent me the group’s latest video, “Meet Me Halfway”. I was stunned by the incredible depth of the video. Its symbolism reaches deep into Mystery religions of antiquity and reveals tenets of esoteric schools such as the Kaballah. Pretty unexpected from the group also known for singing “My hump, my hump, my hump, my hump, my lovely lady lumps“.

The path to illumination

After viewing the video, it is fairly obvious that the director did not want to convey a simple love song.  It is about the union of the physical and the astral planes, of the male and female principles and between humanity and divinity. It is about the yearning of a being of the mundane world to seek a higher truth. The video is drenched with occult symbolism used in esoteric schools such as the Kaballah, Freemasonry, Theosophy, Gnostic Christianity and more. 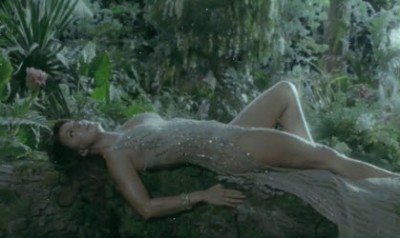 The video starts with Fergie lying down in a lush, green jungle. She is on the physical plane, on planet earth which is abundant with terrestrial life and life-giving humidity. She is the archetypal Eve in the Garden of Eden. Despite all the beauty surrounding her, Fergie is looking to the sky and yearning for “something more”, which is currently unattainable to her. She feels that there is something missing.

I can’t go any further than this
I want you so badly, it’s my biggest wish

Fergie is singing to her divine nature, to her higher self which seems infinitely far from her, yet it can still hear her. She went as far as humanly possible in her spiritual quest and she is asking her spiritual self to make a move towards her. She is heard. 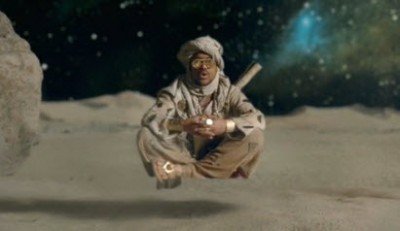 Rapper apl.de.ap (yes, that’s his name) plays the role of Fergie’s higher consciousness, the missing piece needed to obtain spiritual enlightenment. He is dressed in garments reminiscent of eastern sages or mystics and is meditating. The fact that he is levitating, surrounded by an aura, rotating and multiplying himself further conveys this sense of ethereal, non-human presence. He is not a physical human, but Fergie’s spiritual counterpart. Apl.de.ap’s lyrics communicate that as much as Fergie wants to connect with her higher-self, the higher-self longs to reunite with Fergie as well. They were forming a single unit before she “fell” into material existence and they want to “become one” again.

Apl.de.ap’s character completes Fergie in every way. She is physical, he is spiritual; she is lives in terrestrial life, he is lives in nothingness; she is female, he is male. In alchemical terms, she is the Mercury and he is the Sulfur. This concept of “two souls” is all-important Kabbalistic teachings. 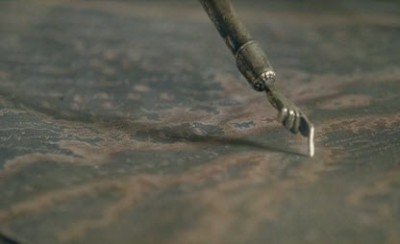 Apl.de.ap uses a Torah Pointer to consult his map. In this esoteric context it is used for Kabbalistic studies. Does the Kabbalah provide the road map to enlightenment?

Here’s an explanation of Kabbalistic philosophy using the Zohar’s (the most important work of Kabbalah) interpretation of the Genesis:

“The Zohar holds the concept of two Adams: the first a divine being who, stepping forth from the highest original darkness, created the second, or earthly, Adam in His own image.The higher, or celestial, man was the Causal sphere With its divine potencies and potentialities considered as a gigantic personality; its members, according to the Gnostics, being the basic elements of existence. This Adam may have been symbolized as facing both ways to signify that with one face it looked upon the proximate Cause of itself and with the other face looked upon the vast sea of Cosmos into which it was to be immersed. Philosophically, Adam may be regarded as representative of the full spiritual nature of man – androgynous and nor subject to decay. Of this fuller nature the mortal man has little comprehension. Just as spirit contains matter within itself and is both the source and ultimate of the state denominated matter, so Eve represents the lower, or mortal, portion that is taken out of, or has temporal existence in the greater and fuller spiritual creation.”
-Manly P. Hall, Secret Teachings Of All Ages 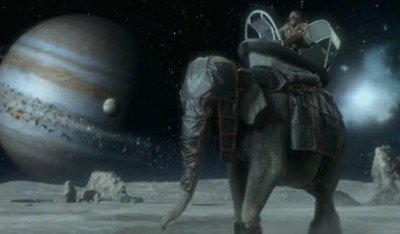 Exploring the universe on the back of his elephant, Will.I.Am is the liaison between the spiritual and the terrestrial world. He could be called a “cosmic travel agent”. He is seeking the gateway that would allow Fergie and Apl.de.ap to unite again. This sense of travel is well reflected in his lyrics: 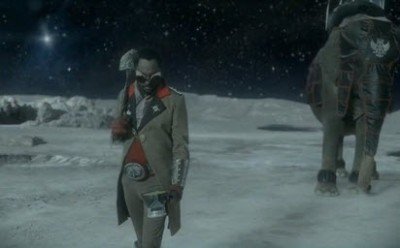 Notice on the elephant the symbol of a double-headed eagle, which is very similar to the symbol of the Scottish Rite of Freemasonry. 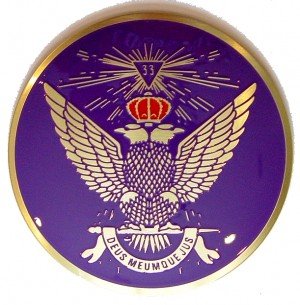 Is Freemasonry the “gateway” to Kabbalistic enlightenment?

Apl.de.ap gets up and starts his search for Fergie, his lost counterpart. He is the active principle searching, while Fergie is the passive principle, laying down on earth and waiting. Together they will become complete. In his walk through the cosmic desert, we can see that he is holding a very symbolic staff: 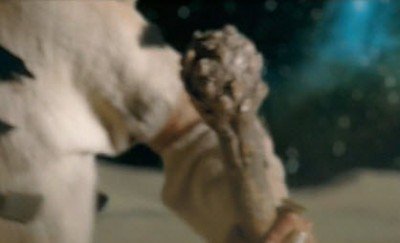 Pine cones have always been occultly associated with spiritual enlightenment. Whether we look at ancient Babylonians, Egyptians, Greeks or Christians, the pine cone has represented the mysterious link between the physical and the spiritual worlds, which can be found in the human brain. The pineal gland, also known as the third eye, is represented by the pine cone in occult symbolism. It is taught by Mystery schools to open the doors to spiritual perception once the seven Chakras are properly activated. 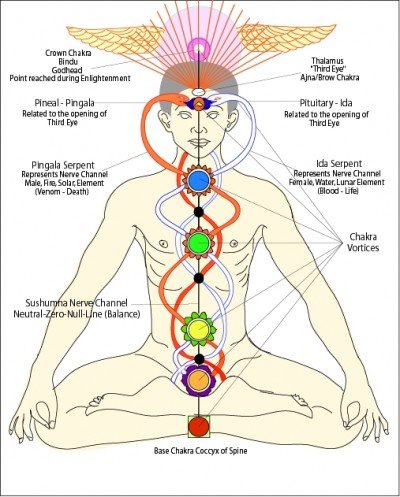 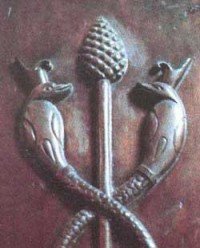 Pine Cone Staff of Osiris surrounded by the two serpents of the Kundalini. The staff represents the spine and the pine cone represents the pineal gland. 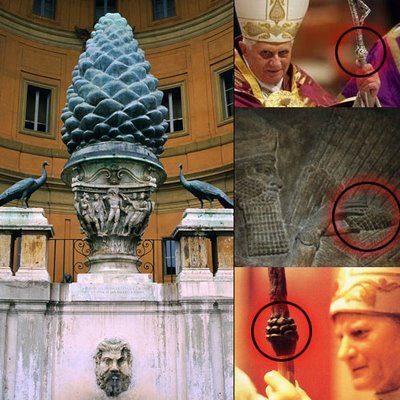 Giant pine cone at the Vatican

Manly P. Hall explains the importance of the pine cone in Freemasonry and ancient civilizations:

“Sufficient similarity exists between the Masonic CHiram and the Kundalini of Hindu mysticism to warrant the assumption that CHiram may be considered a symbol also of the Spirit Fire moving through the sixth ventricle of the spinal column. The exact science of human regeneration is the Lost Key of Masonry, for when the Spirit Fire is lifted up through the thirty-three degrees, or segments of the spinal column, and enters into the domed chamber of the human skull, it finally passes into the pituitary body (Isis), where it invokes Ra (the pineal gland) and demands the Sacred Name. Operative Masonry, in the fullest meaning of that term, signifies the process by which the Eye of Horus is opened. E. A. Wallis Budge has noted that in some of the papyri illustrating the entrance of the souls of the dead into the judgment hall of Osiris the deceased person has a pine cone attached to the crown of his head. The Greek mystics also carried a symbolic staff, the upper end being in the form of a pine cone, which was called the thyrsus of Bacchus. In the human brain there is a tiny gland called the pineal body, which is the sacred eye of the ancients, and corresponds to the third eye of the Cyclops. Little is known concerning the function of the pineal body, which Descartes suggested (more wisely than he knew) might be the abode of the spirit of man. As its name signifies, the pineal gland is the sacred pine cone in man – the eye single, which cannot be opened until CHiram (the Spirit Fire) is raised through the sacred seals which are called the Seven Churches in Asia.”
-Manly P. Hall, Secret Teachings of All Ages 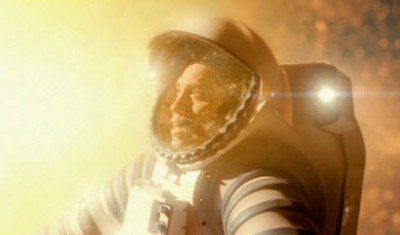 Taboo stares in awe at the sun, the metaphorical representation of divinity. The process of enlightenment has started. He is the bridge “to the other side”.

The Opening of the Gateways

After searching, Will.I.Am opens the portal which will allow Fergie and Apl.de.ap, the two souls, to finally unite. All that is left to do is simply to walk through. 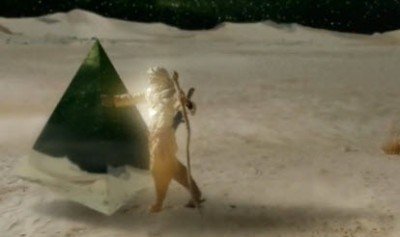 The higher-self enters a pyramid-shaped gateway, representing the spiritual world and the triune nature of divinity 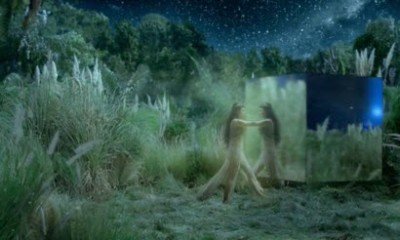 The lower-self enters a cube-shaped gateway, representing the material plane and planet Earth

Shooting stars soar across the sky, representing the completion of the alchemical wedding. 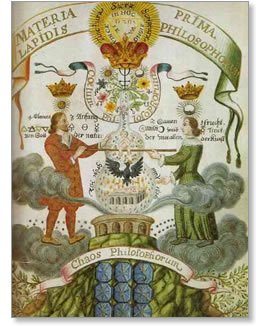 The video to the Black Eyed Peas’ Meet Me Halfway features many symbolic elements of esoteric spirituality. Many schools of thought have been mentioned here, such as the Kaballah, Buddhism, Alchemy and Freemasonry. This might be confusing for readers who are not acquainted with those concepts but you only need to keep one thing in mind: all of these schools teach different paths leading the same goal, which is spiritual enlightenment. It is the “Inner-Christ” of the Gnostic Christians, the “Great Work” of Alchemy and the “Lost Key” of Freemasonry.

In the context of this website, where many videos analyzed present sinister messages, many people will want to ask me: Is this video good or bad? My answer is: It is what you want it to be … and what you want it to be will probably be a result of your religious background and your personal beliefs. The message of this video is pure occultism, as in “the representation of spiritual truths through symbolism”, and it represents the beliefs of the true “Illuminatus”, those who genuinely seek spiritual enlightenment. The satanic, mind-control symbols seen in previous articles are corrupted, negatively charged, occult byproducts. The same way male and female principles, positive and negative energies and light and darkness exist, so exists “good” and “evil” occultism, often typified by white and black magic. The good will inspire people to reach to the sky and ask a higher truth to “meet them halfway”, while the evil will leave them confused and tormented, obsessed by materiality and screaming to nobody in particular “Let’s get retarded”.