Along with her new album, Beyonce has presented her fans to a new alter-ego named Sasha Fierce. The singer affirms that this new persona is the fun, more sexual and more aggressive side of her. This is, however, the “general public” version of the story. The esoteric meaning revealed by the symbols surrounding this new persona is much deeper: Sasha Fierce is a symbolic representation of an artist taken over by evil to obtain success.

“I have someone else that takes over when it’s time for me to work and when I’m on stage, this alter ego that I’ve created that kind of protects me and who I really am”.
-Beyonce

The theme of the album I am…Sasha Fierce revolves around the duality between the godly Beyonce and the evil Sasha Fierce. This spiritual duali, y is fought in the songs, the pictures and the videos. Notice on the above images the Christian cross of the good and pure Beyonce versus Sasha Fierce who is mimicking devil horns with her hands. Songs like Ave Maria and Halo on her album contain obvious spiritual connotations and can be interpreted as either religious songs or odes to her satanic possessor. The persona of Sasha Fierce – who is presented as a separate entity- always wears heavy makeup on her eyes, if not sunglasses which represent her deceptive nature.

Before we get into an in depth analysis, let’s look at the main picture displayed at beyonce.com, which sums ups perfectly the purpose of this article.

Sasha Fierce is wearing a metal plate featuring prominently the face of Baphomet, who is also featured on the sigil of the Church of Satan: (For more information on Baphomet, read the article entitled Who is Baphomet?).

Sigil of the Church of Satan

Baphomet’s head is the only part of the picture that is in color, which shows the importance of this symbol. Another head of Baphomet sits right on top of the first making things even more significant. Sasha’s “dress” is adorned with stylish rear-view mirrors and motorcycle handles, which makes Sasha Fierce the vehicle of Baphomet. This exact outfit was used for a George Michael video…someone, somewhere thought it would be a perfect fit for Sasha Fierce. In her interviews, Beyonce describes her performances as Sasha Fierce like an experience coming right out of The Exorcist.

“When I’m onstage I’m aggressive and strong and not afraid of my sexuality. The tone of my voice gets different, and I’m fearless. I’m just a different person.” 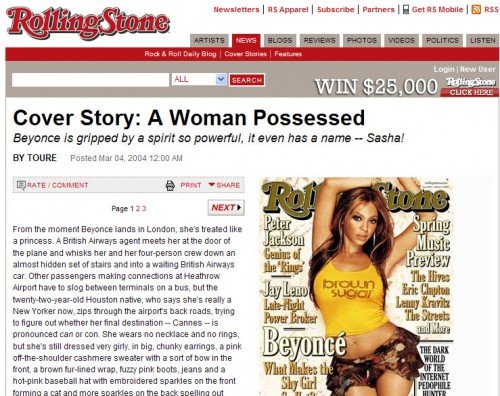 The Birth of Sasha Fierce

Sasha Fierce was born when I did ‘Crazy in Love.’ People, when they meet me, expect that all the time, but that person is strictly for the stage.”
– Beyonce, People Magazine, November 18th, 2008

Why did Beyonce say that? How can a character be born during a song like Crazy in Love, which doesn’t have anything to do with Sasha Fierce?

The video tells the story of the birth of Sasha Fierce by depicting the steps towards Beyonce’s transformation. Through symbolic scenes, we first see Beyonce walking towards a speeding car (with Jay-z in the backseat). The driver is the entity that already took over Jay-Z. Beyonce loosens up her hair to prepare herself and gets on a stage to begin initiation, symbolized by sexual dance moves. She then reaps the rewards of the selling of her soul with fame and fortune. Next, she is emulated by young girls who copy her dancing style. In the final scene, the good Beyonce gets literally blown up while sitting in the backseat of a car by Jay-Z – who calls himself “Young” in the song. As you know, Jay-Z isn’t young, but, in this song, he is considered “Young” after his recent rebirth on the dark side. After the explosion, Sasha Fierce magically appears next to Jay-Z, looking sexy yet devilish. In his verse, Jay-Z  refers to Beyonce as “Young B” because she was just reborn.

2- The flashes represent celebrity and success

3- Surrounded by girls who emulate her

4- Stuck in the backseat of a car

5- Explosion of the car, representing the death of the old Beyonce (who was still stuck in the backseat)

6- Sasha Fierce appears out of nowhere

The video of “Diva” uses the exact same allegory of the car exploding.

Beyonce walks away from a car full of dummies.

Diva starts with a shot of dummies in the trunk of a car who represent the “dummies” that idolized and imitated Sasha Fierce.  Sasha Fierce walks walking away, wearing glasses who are literally shades hiding her eyes, representing the fact that we are not dealing with Beyonce but a deceiver. After going into a warehouse to dance frenetically, act bitchy and sing about vain subjects like materialism, she comes out and lights the car on fire. The same way Jay-Z blew up the car in “Crazy in Love” (which killed the old Beyonce and gave birth to Sasha Fierce), she blows up the car filled with the mindless dummies who were seduced by her deceitful ways.

Why is Sasha Fierce Often Dressed Like a Robot?

Beyonce’s performance at the 2007 BET Awards carried heavy symbolism. Dressed in a robot suit, she wakes up after being electrically charged .

This performance is inspired by a scene of the 1927 movie “Metropolis” where a female robot becomes alive.

The recreation of this scene from Metropolis is quite significant. The movie depicts a society divided between two rigid social classes, the  “thinkers” and the “workers”, who can’t communicate with each other. Maria, a young female worker who has some influence among her exploited colleagues gets kidnapped by the ruling class. She is taken to the laboratory of a mad scientist who created a robot that could take her physical likeness. The scene above depicts the transformation of the robot into Maria, who will then be controlled by the scientist to incite revolt among the workers. The inverted pentagram behind the robot symbolizes the initiation of Maria into the evil side. She is designed to bring out the worst in men, causing violence, lust, passion and corruption among them.  The robot is a devilish and sexually provocative version of Maria and ends up performing in a decadent nightclub of the metropolis. Her mesmerizing dance caused such excitement that it caused a widespread fight among the men present.

Maria from Metropolis with inverted pentagram behind her (symbol of Black Magic).

Is this why we chose to portray Beyonce as Maria from Metropolis? To use her physical likeness to propagate evil messages to the “working class”?

I’m pretty sure I’ll get messages from confused people, wondering why I “see evil” everywhere or something. Those people do not understand a couple of fundamental truths that aren’t based on wild beliefs but on facts: Record companies like Columbia Records own the image of pop stars like Beyonce and Rihanna. These conglomerates are owned by a handful of powerful people who, more often than not, are initiated into occult secret societies.  They believe in the powers of the mind, channeling spirits, Black and White Magick, demon possession, sacred rituals and entities populating the ethereal spheres.  In other words, if you don’t believe in the spiritual realm, THEY DO. So the analysis here makes perfect sense to them and they know that the average Joe doesn’t think in those terms…mostly because he was educated since childhood to be blind to those things.

As in anything in life, esoteric teachings range from the sublimely good to the infernal evil. They can elevate your consciousness to a godly level or they make you a slave of malignant spirits. That being said, there appears to be a conscious effort to subject the population to negative imagery through the different outlets of mass media. Plato, the Greek philosopher believed that music had such far reaching effects on the hearts of men that popular songs should be carefully chosen:

“Music which ennobled the mind was of a far higher kind than that which merely appealed to the senses, and he strongly insisted that it was the paramount duty of the Legislature to suppress all music of an effeminate and lascivious character, and to encourage only that which was pure and dignified”
-Manly P. Hall, Secret Teachings of All Ages

If Plato, one of the brightest minds of the Western world believed that music played a vital part in the creation of a perfect nation, can you imagine the effects of negative messages on our modern society? Even if the general population only gets the first level of interpretation of songs or videos,  it is believed that the hidden meanings and symbols still affect the collective subconscious. The result is people leading vain existences, trying to fill the gaping void of their lives by continually satisfying their lowest impulses. In other words, lost souls that can be easily controlled and manipulated.