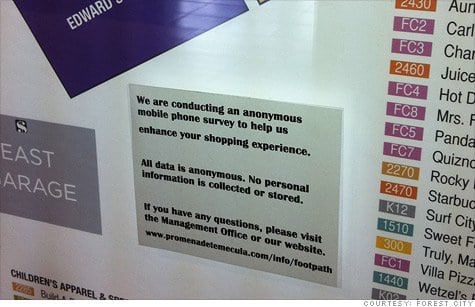 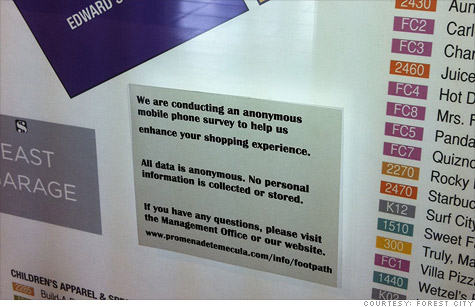 Throwing oneself in a pool of frenzied people and fighting to purchase consumer products that have been slightly discounted: is there a better way to begin the holiday season? Well this year, malls will monitor and analyze that frenzy as they will track customer’s as they go from store to store using their cell phone signals. Is there an option to opt out? No. Well, yes…leaving the phone in the car. Here’s an article from CNN Money.

Attention holiday shoppers: your cell phone may be tracked this year.

While the data that’s collected is anonymous, it can follow shoppers’ paths from store to store.

The goal is for stores to answer questions like: How many Nordstrom shoppers also stop at Starbucks? How long do most customers linger in Victoria’s Secret? Are there unpopular spots in the mall that aren’t being visited?

While U.S. malls have long tracked how crowds move throughout their stores, this is the first time they’ve used cell phones.

The management company of both malls, Forest City Commercial Management, says personal data is not being tracked.

“We won’t be looking at singular shoppers,” said Stephanie Shriver-Engdahl, vice president of digital strategy for Forest City. “The system monitors patterns of movement. We can see, like migrating birds, where people are going to.”

Still, the company is preemptively notifying customers by hanging small signs around the shopping centers. Consumers can opt out by turning off their phones.

The tracking system, called FootPath Technology, works through a series of antennas positioned throughout the shopping center that capture the unique identification number assigned to each phone (similar to a computer’s IP address), and tracks its movement throughout the stores.

The system can’t take photos or collect data on what shoppers have purchased. And it doesn’t collect any personal details associated with the ID, like the user’s name or phone number. That information is fiercely protected by mobile carriers, and often can be legally obtained only through a court order.

Manufactured by a British company, Path Intelligence, this technology has already been used in shopping centers in Europe and Australia. And according to Path Intelligence CEO Sharon Biggar, hardly any shoppers decide to opt out.

“It’s just not invasive of privacy,” she said. “There are no risks to privacy, so I don’t see why anyone would opt out.”

Now, U.S. retailers including JCPenney and Home Depot are also working with Path Intelligence to use their technology, Biggar said.

Home Depot has considered implementing the technology but is not currently using it any stores, a company spokesman said. JCPenney declined to comment on its relationship with the vendor.

Why Apple and Google need to stalk you

Some retail analysts say the new technology is nothing to be worried about. Malls have been tracking shoppers for years through people counters, security cameras, heat maps and even undercover researchers who follow shoppers around.

And some even say websites that track online shoppers are more invasive, recording not only a user’s name and purchases, but then targeting them with ads even after they’ve left a site.

“It’s important for shoppers to realize this sort of data is being collected anyway,” Biggar said.

Whereas a website can track a customer who doesn’t make a purchase, physical stores have been struggling to perfect this kind of research, Biggar said. By combining the data from FootPath with their own sales figures, stores will have better measurements to help them improve the shopping experience.

“We can now say, you had 100 people come to this product, but no one purchased it,” Biggar said. “From there, we can help a retailer narrow down what’s going wrong.”

But some industry analysts worry about the broader implications of this kind of technology.

“Most of this information is harmless and nobody ever does anything nefarious with it,” said Sucharita Mulpuru, retail analyst at Forrester Research. “But the reality is, what happens when you start having hackers potentially having access to this information and being able to track your movements?”

Last year, hackers hit AT&T, exposing the unique ID numbers and e-mail addresses of more than 100,000 iPad 3G owners. To make it harder for hackers to get at this information, Path Intelligence scrambles those numbers twice.

“I’m sure as more people get more cell phones, it’s probably inevitable that it will continue as a resource,” Mulpuru said. “But I think the future is going to have to be opt in, not opt out.”

Robert Kennedy’s Assassin Claims He Was Under Mind Control