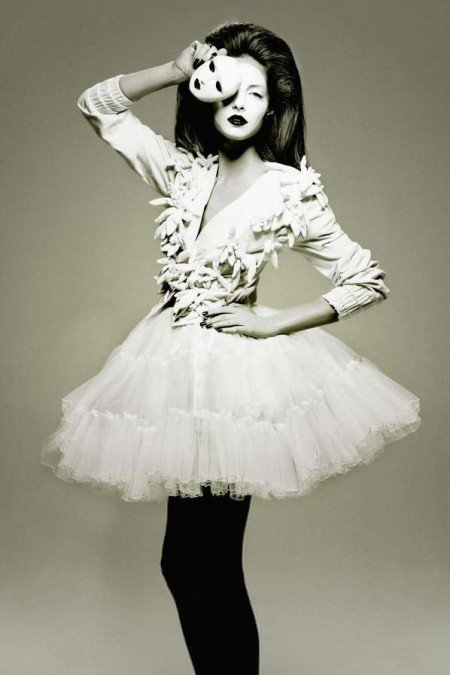 The first month of 2012 is over and boy did we see Illuminati symbolism across popular culture. Here’s the January edition of Symbolic Pics of the Month featuring Demi Lovato, Nikki Minaj, Beth Ditto, Dakota Fanning and a bunch of fashion shoots. Even Warren Buffett is in there.

This fashion shoot entitled “Kim & Luisa” by photographer Pierre Dal Corso appears to be heavily influenced by mind control imagery. In this pic, the model’s face is painted white to match the mask she is holding. Masks are classic symbols of mind control that represent the MK slave’s alter persona (masks are also used in actual mind control programming).  The mask also hides one eye, another important symbol of mind control. 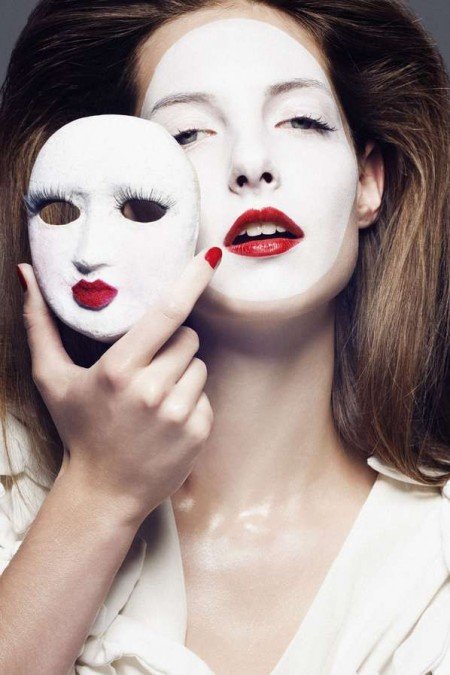 Another pic emphasizing on the concept of the mask as an alter persona. 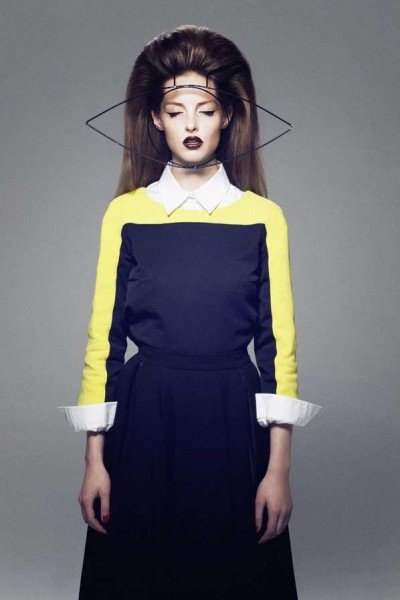 The model’s expressionless face inside a big eye…as if she is owned by it. 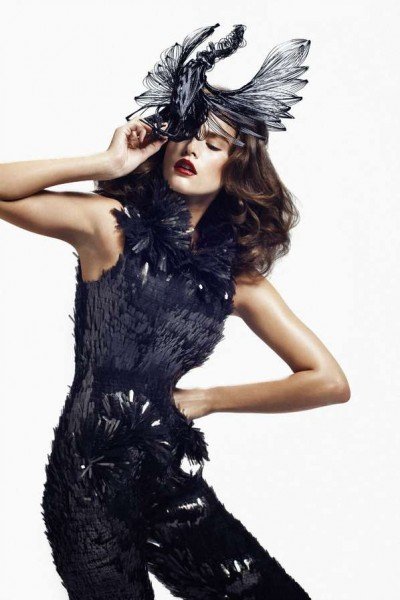 Same photoshoot, again with the one eye. 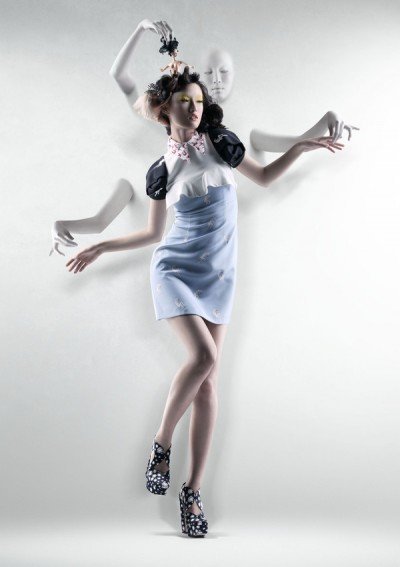 Here’s another mind control-inspired photoshoot by photographer BlanQ. Aptly entitled “Identity” (MK slaves lose their own identity and are programmed new ones) the shoot features the robotic models manipulated by hidden handlers. In this pic, the handler places a doll (representing the powerless slave) on the model’s head, while other arms control the rest of her body. 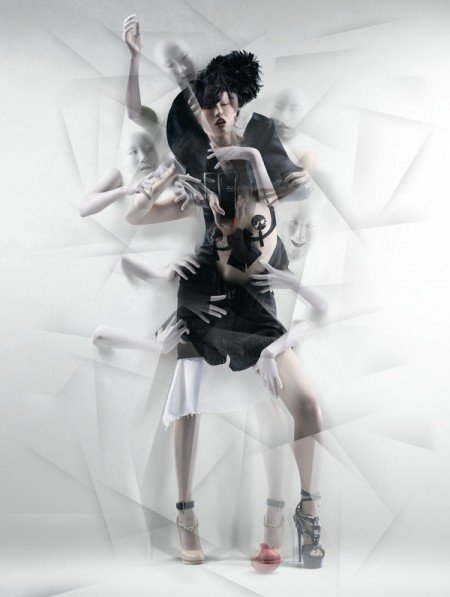 In this one, the handlers get a bit more “grabby”, demented and abusive  which refers to the sexual abuse that is inflicted on MK slaves to cause dissociation. 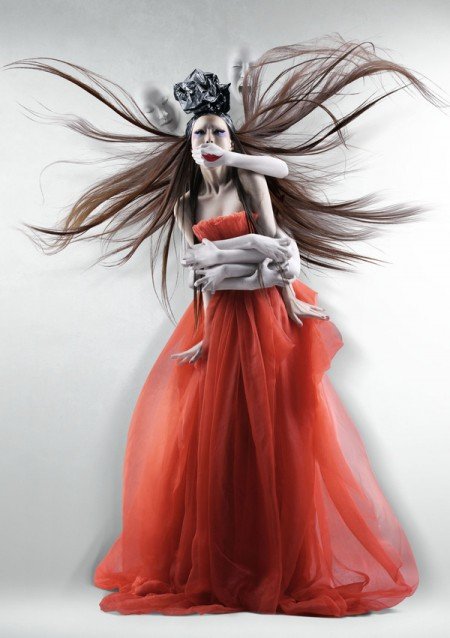 This disturbing pic (is this still fashion) portrays the total control of handlers on the slaves. They even hide the slave’s distress behind a forced (programmed) smile. 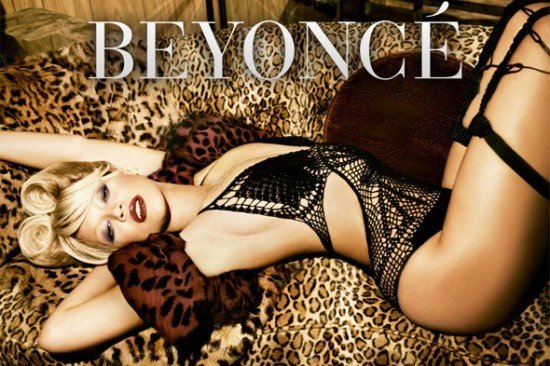 This image, used to promote Beyonce’s last album, caused some controversy due to the fact that her skin color was obviously “paled”. Looking further into the image, the animal prints and the blonde hair refer to Beta Programming (also known as Sex Kitten programming).

Speaking of Sex Kitten, here’s another combo of blond hair and animal prints. In Nikki Minaj’s video “Stupid Hoe” (the most disliked video of 2012) the rapper is shown dancing inside a cage, one of the Illuminati’s favorite ways to depict female pop stars. Definitely a recurring theme. 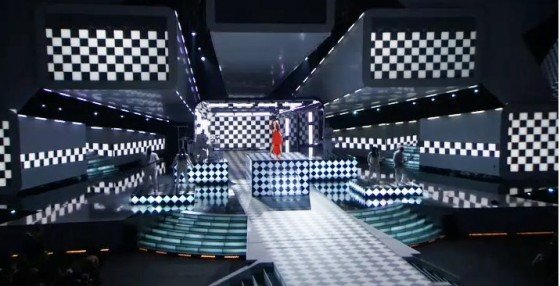 Demi Lovato’s ritualistic performance at the People’s Choice Awards. Dressed in red, color of initiation, Demi performs surrounded by Masonic checkerboard patterns, the surface on which occult rituals are performed in secret societies. 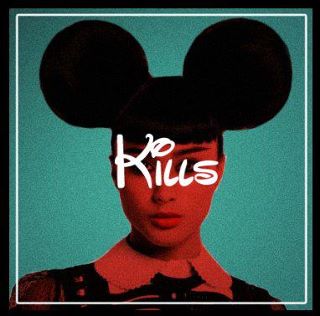 Mickey Mouse ears are also a favorite way to refer to mind control in pop culture.  As seen in previous articles, Natalia Kills is all about mind control. 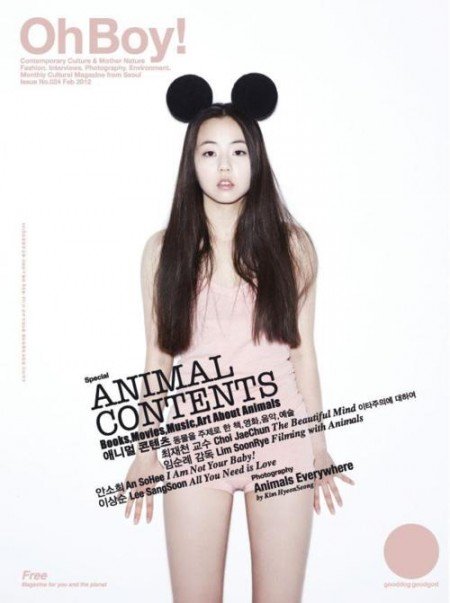 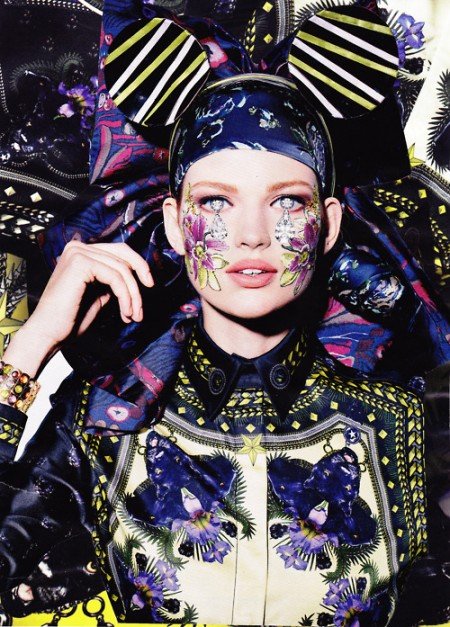 Photographer Richard Burbridge also felt the need to use Mickey Mouse ears in his photoshoot. Inverted star and Baphomet head on the model’s shirt. 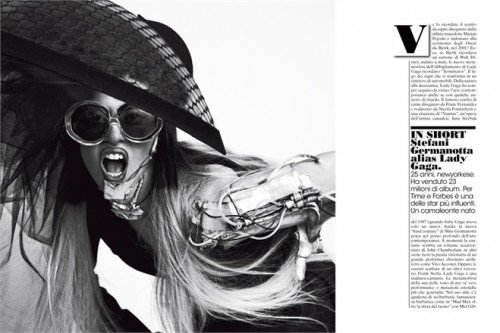 Lady Gaga photoshoot in l’Umomo Vogue. She is depicted as a fem-bot (mind control, transhumanism, Maria from Metropolis). Funny how pop stars, idols of millions of people, are openly showed as dehumanized, robotic figures…the exact opposite of what artistic expression is about. 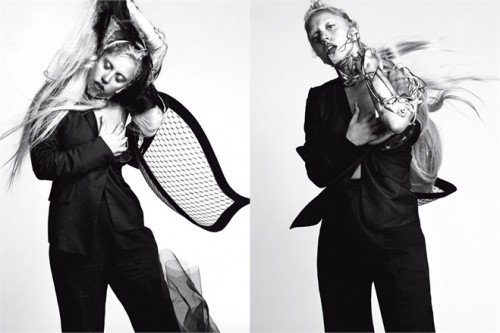 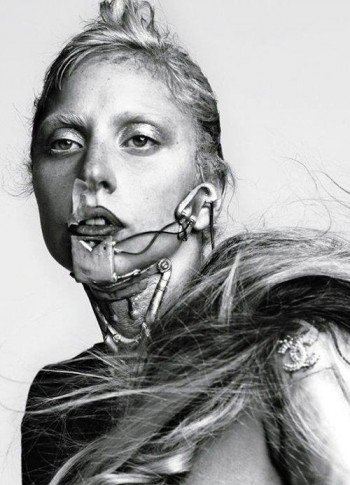 She does not seem to be in control of what she says. 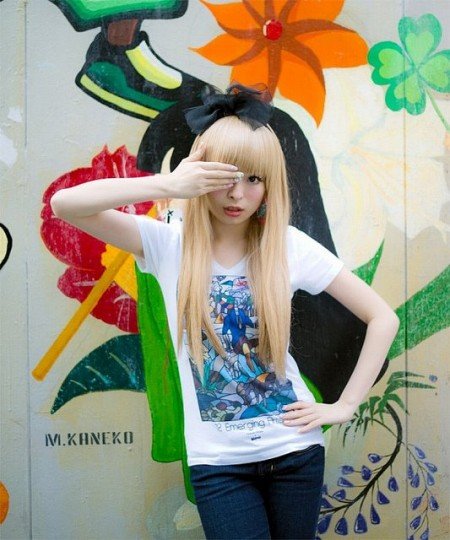 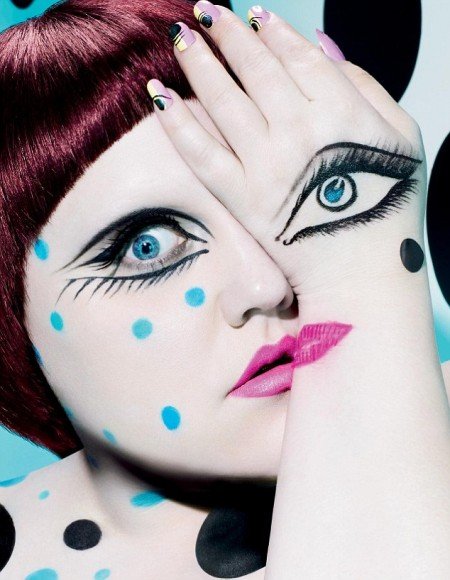 Beth Ditto is the new face of  MAC. She is apparently celebrating her association with the makeup brand with a one-eyed tribute. 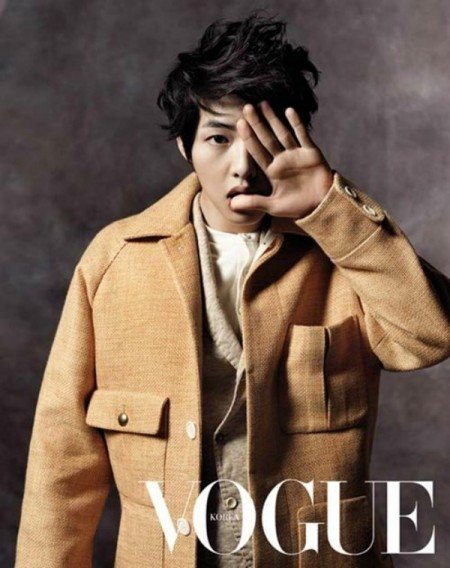 Actor Song Joon-ki in Vogue Korea. Vogue is a major “distributor” of Illuminati symbolism across the world. 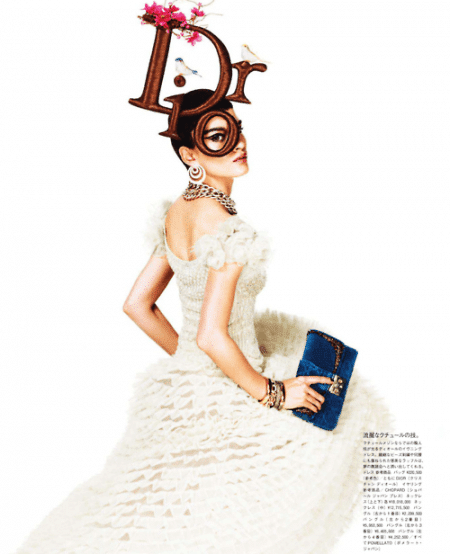 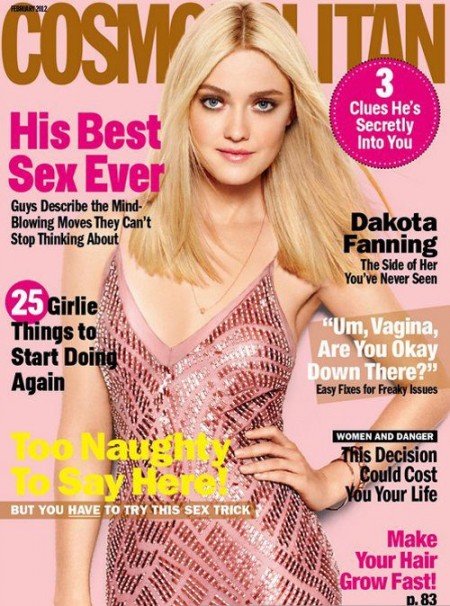 The cover of this issue of Cosmopolitan caused some controversy due to the fact that Dakota Fanning is a minor…and is surrounded with phrases such as “His best sex ever!”, “Too naughty to say here!” and “Um, Vagina are you okay down there?” 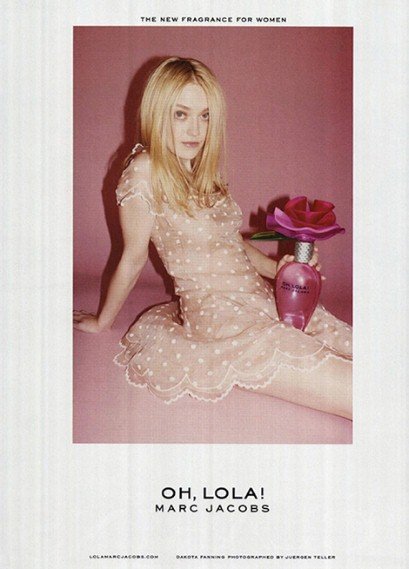 Fanning was also featured in this controversial ad for Marc Jacobs holding a phallic object. Working hard to normalize pedophilia. 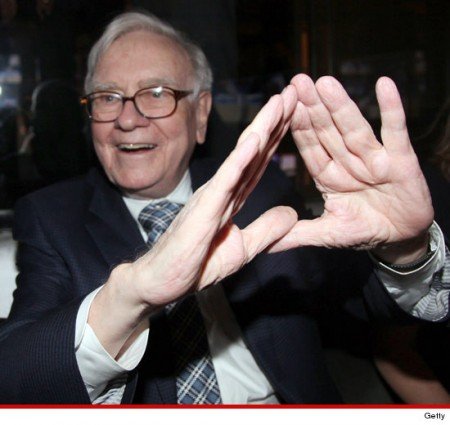 Super-elite, multi-billionnaire Warren Buffett at a party organized by Jay-Z. As TMZ now likes to say, he’s “throwing up the Illuminati sign”. 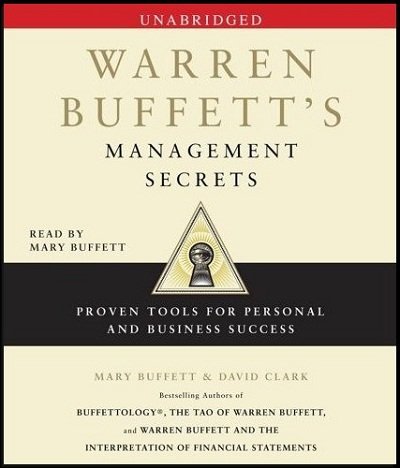 As always, special thanks to those who sent in pics!