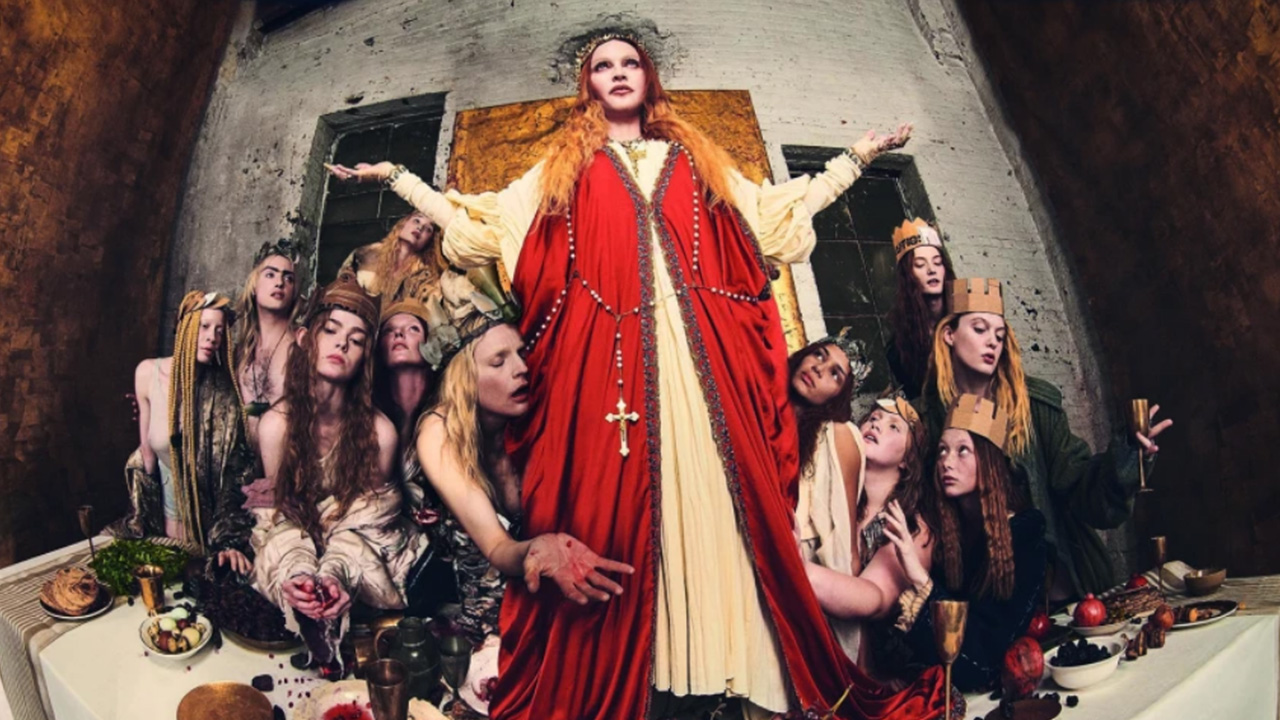 Madonna was recently featured in Vanity Fair. And, as the Grand Priestess of the music industry, was celebrated by basically mocking Christianity. 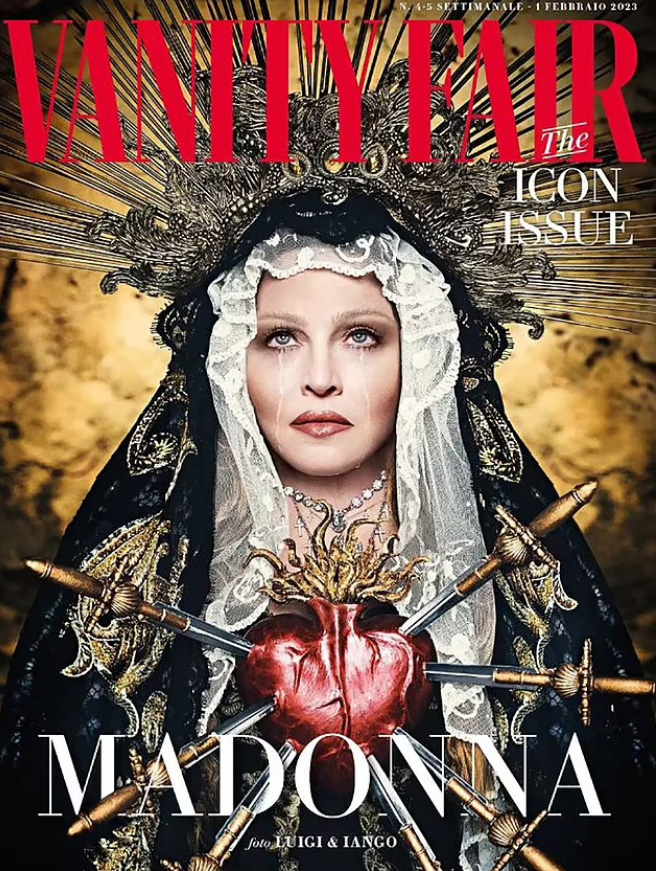 On the cover of Vanity Fair’s Icon issue, Madonna is depicted as the Virgin Mary. This is nothing new, Madonna has been doing this for decades (her name is a literal reference to the Virgin Mary). However, this photoshoot takes symbolism further. In Christian imagery, the Virgin Mary is sometimes portrayed as sorrowful and in tears, with seven swords piercing her heart. These swords represent the Seven Sorrows of Mary – sad events that marked her life (i.e. the Crucifixion of Jesus). With all of that being said, is this image of the Grand Priestess of the industry cosplaying the Virgin Mary blasphemous? Check out this next pic before you decide. 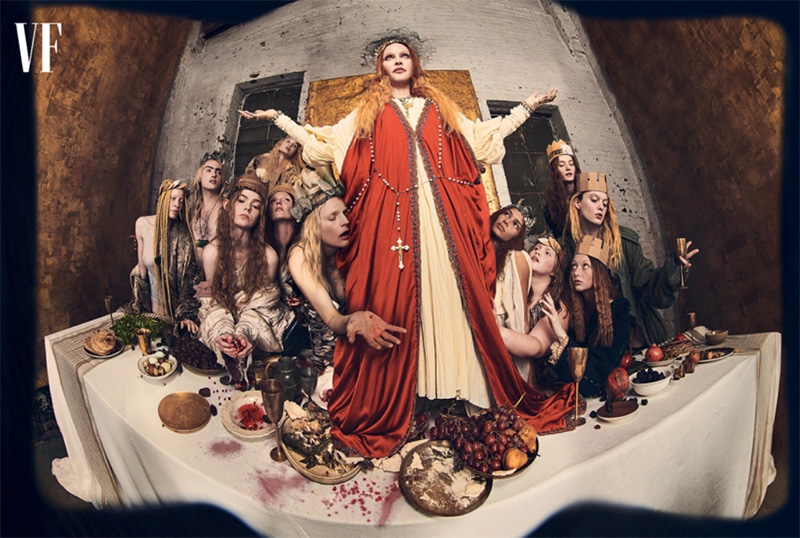 This picture recreates The Last Supper, with Madonna playing the role of Jesus. She’s surrounded by 11 “disciples” (why not 12?) and they’re all women. Well, the second one from the left appears to have a hairy chest, so they probably slipped a transgender disciple in there (even Biblical stories have to comply with the gender-blurring agenda). If you look closely, Madonna is actually standing on the table and she made a mess underneath her. In short, this is all about desecration. 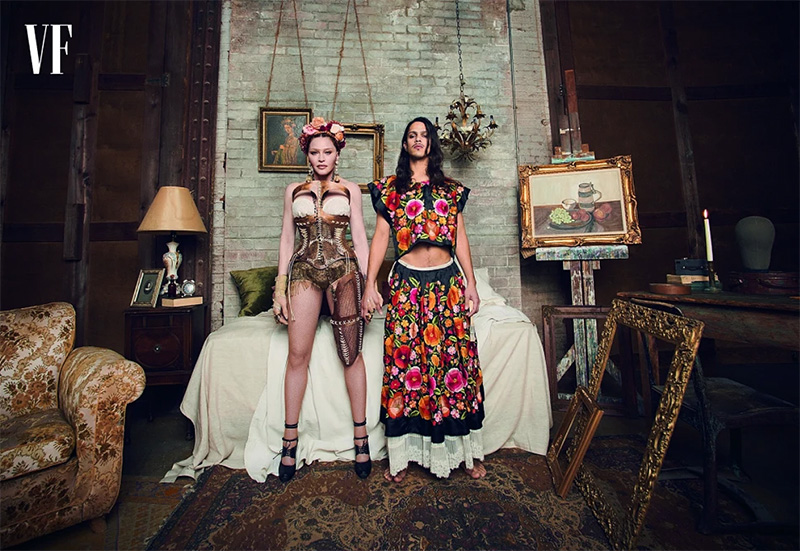 In this picture, Madonna holds hands with some dude wearing a dress. The message: Madonna’s true “religion” is the occult elite’s madness.

As usual, the one-eye sign was all over the world last month, constantly reminding us that the occult elite controls all facets of mass media and the celebrities it creates. Here is a small fraction of the one-eye signs that popped up in the past weeks. 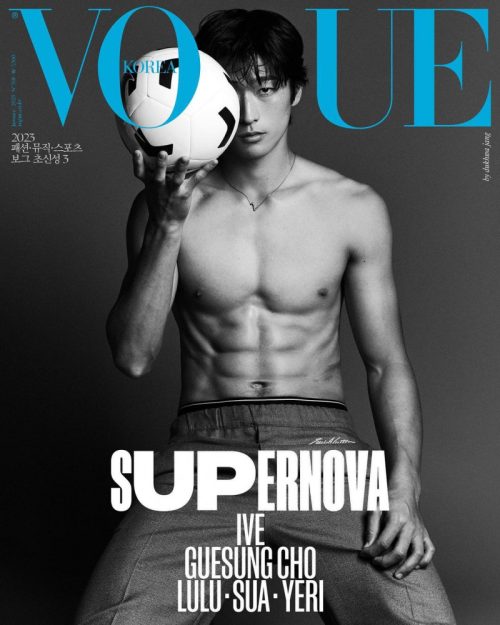 Cho Gue-sung plays for the South Korean national soccer team. Then, he went viral on social media because of his good looks. It did not take long before Vogue made him hide one eye using a soccer ball. The message: We recognized his star potential and we recruited him.

In 2009, I’ve published an article about a Paramore music video that was blatantly about Monarch programming. In that article, I’ve pointed out that Hailey Williams does the one-eye sign constantly. Thirteen years later, Williams released a new album … and it 100% revolves around the one-eye sign. 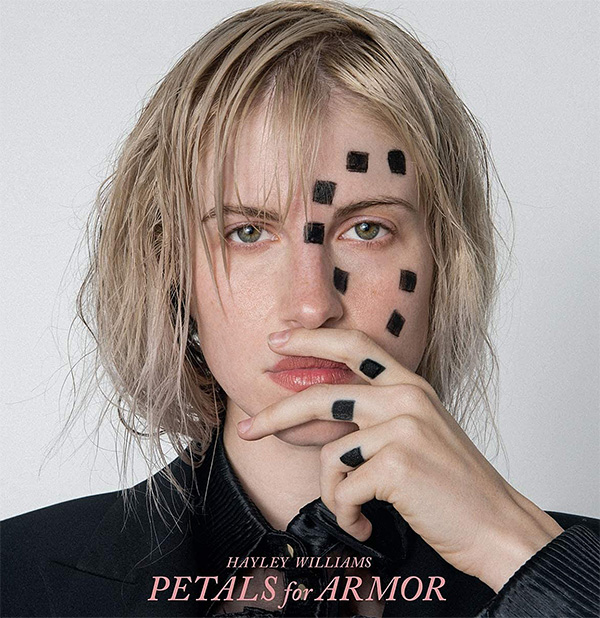 The cover of Hayley Williams’ album Petals for Armor emphasizes one of her eyes in a very clever and creative way (sarcasm). But wait, maybe the cover has nothing to do with the one-eye sign. Maybe it’s just “art” that I’m too dumb to get. Let’s look at another pic from the album. 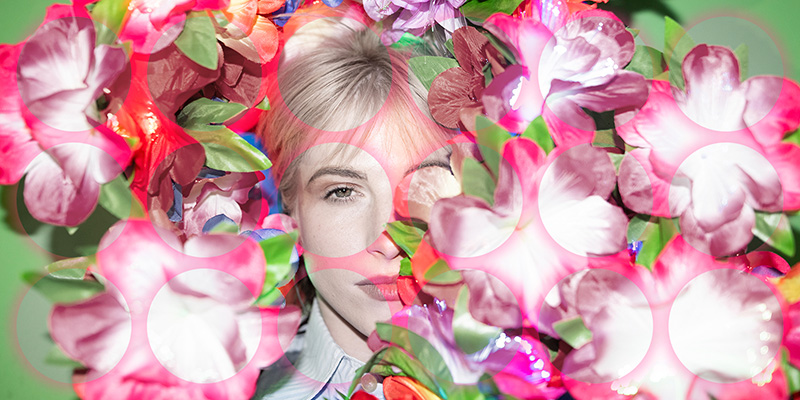 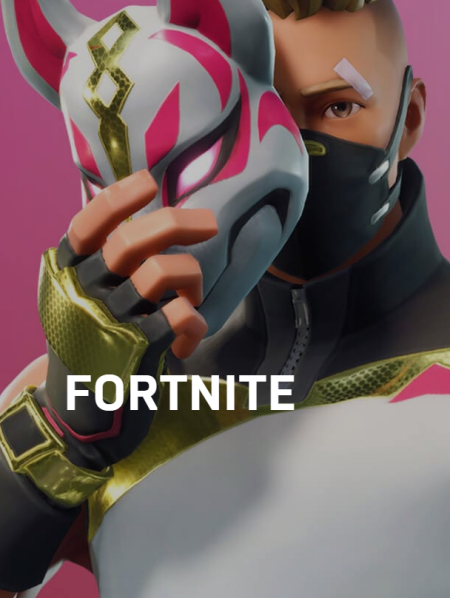 Fortnite is played by millions of children around the world. Promo material of the video game’s latest season heavily revolves around the one-eye sign. The message: The occult elite is definitely not ignoring video games in its quest for total media control.

Time and time again, this site has proven that luxury brands are 100% on board with the occult elite’s symbolism and sick agendas (see Balenciaga). And Gucci keeps releasing highly symbolic (and highly questionable material). 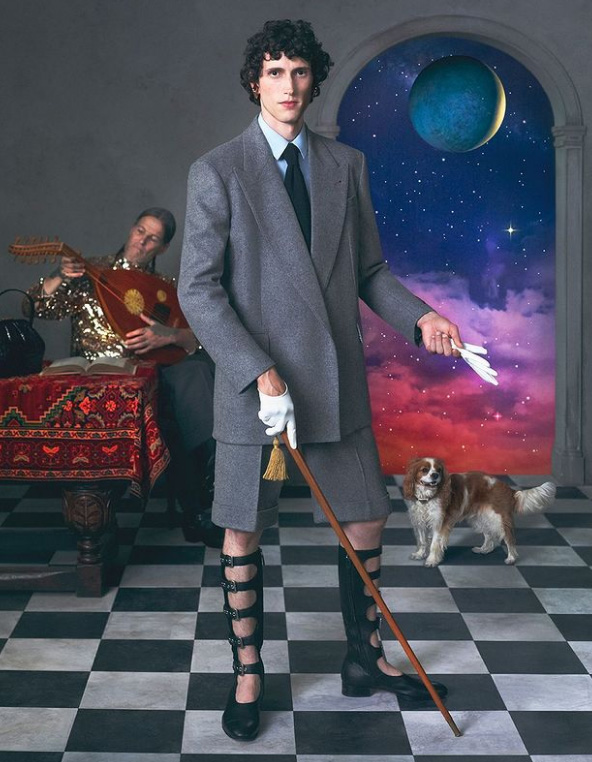 Everything about this pic from Gucci’s “Cosmogenie” campaign is Masonic: The Masonic checkerboard pattern floor, the 90 degrees position of the model’s feet, the white gloves, the arch, and the two pillars. In short, Gucci is paying homage to its occult elite owners. 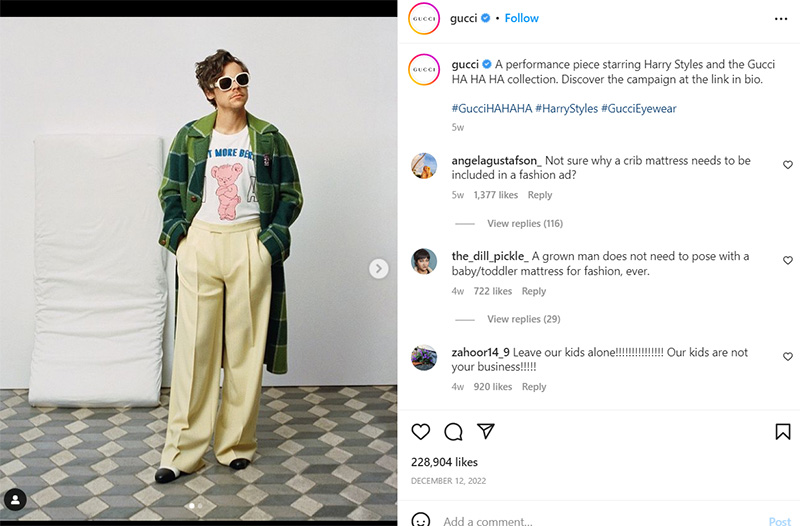 Gucci’s HA HA HA campaign featured Harry Styles looking like some pedo weirdo who stands around while wearing a t-shirt with a teddy bear on it. And, for no reason at all, there’s a baby crib mattress in the background. Why? 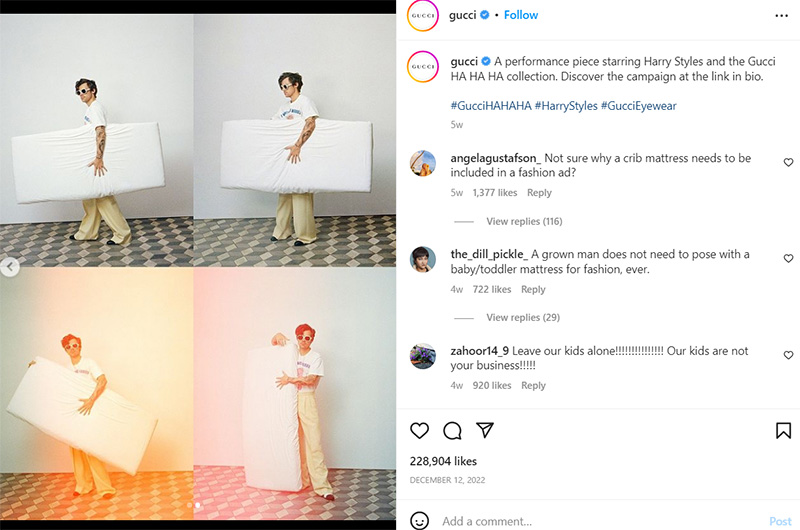 Why is there so much emphasis on that toddler mattress? Why do they insist on being creepy with kiddie stuff?

Speaking of which, Dust magazine is constantly weird and creepy with children. 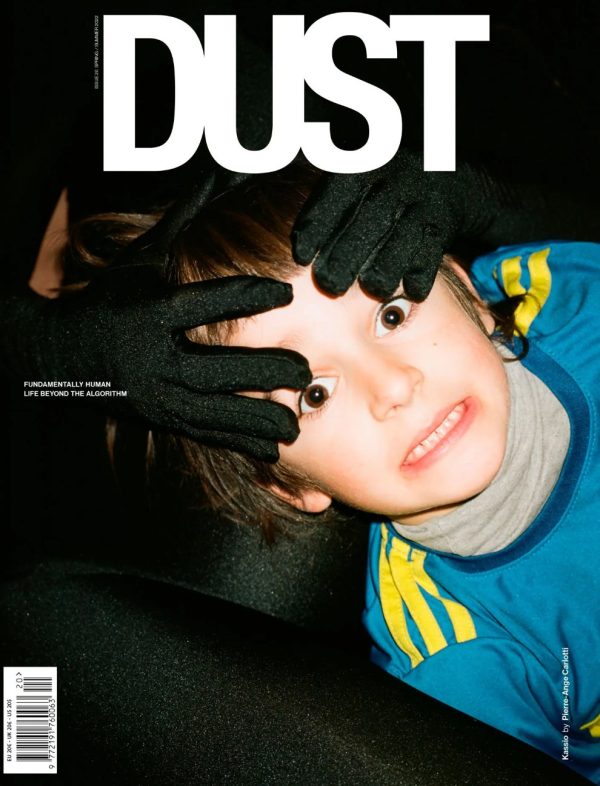 The cover of this issue of Dust features the gloved hands of an adult forcing open the eyes of a child. There’s nothing “cute” about this thing – it points directly to abuse. 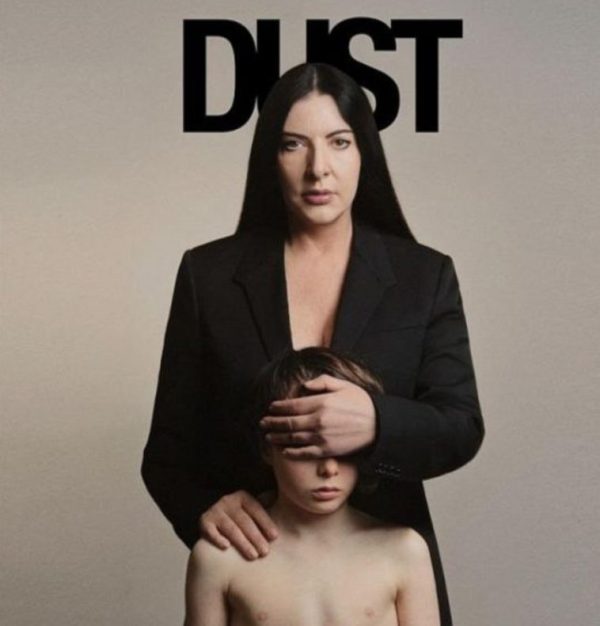 This is another Dust cover from a few years ago. It features industry witch Marina Abramovic creepily covering the eyes of a shirtless child. They’re telling you what the occult elite is doing to children.

For some reason, people in and around Hollywood cannot stay away from “art” depicting children in strange, bizarre settings. 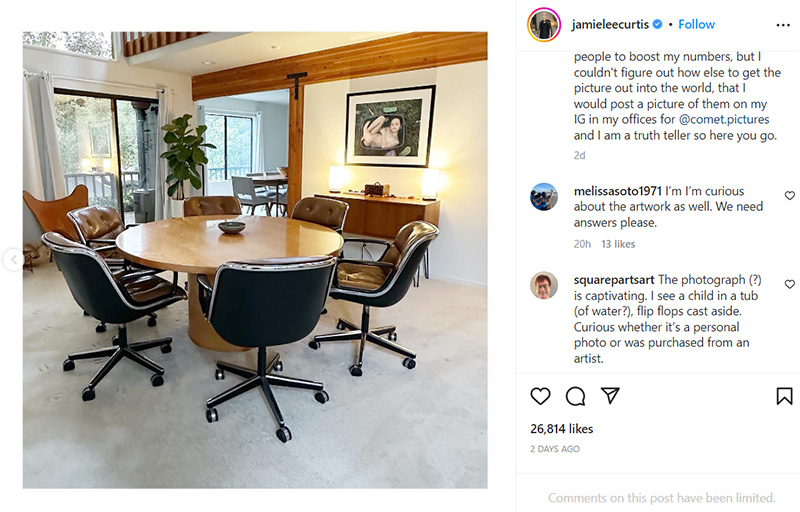 Jamie Lee Curtis posted on Instagram some pictures of her house. Nearly all of the comments went in the same direction: WHAT THE HELL IS THAT PICTURE ON THE WALL? 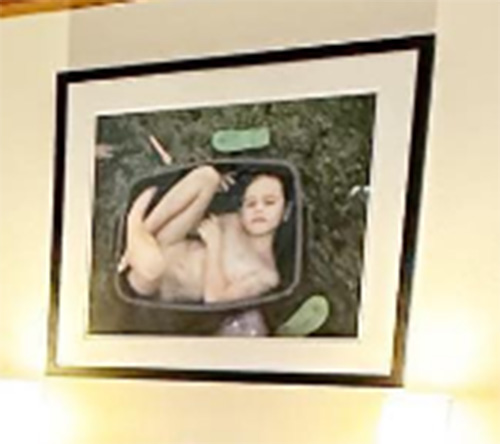 The picture depicts a naked child awkwardly crammed inside a tub (or something). After some backlash, Curtis deleted the post and claimed that the “artist” who did this was the child’s mother. Whatever. The real question is: Who in their right mind even thinks of purchasing such a thing to hang in an office space? 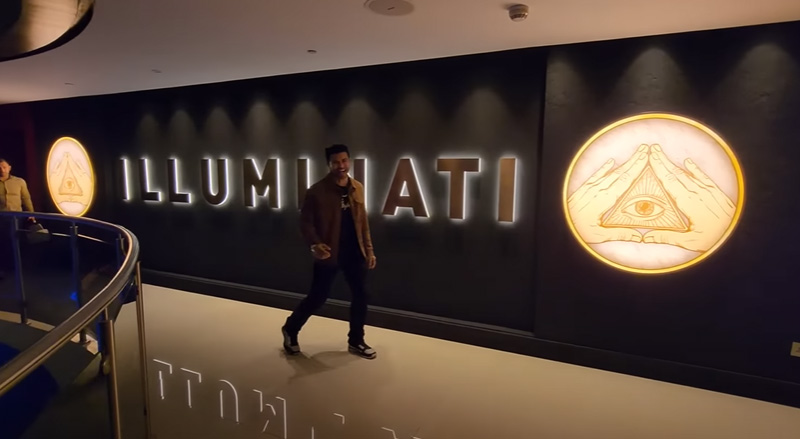 There’s a new lounge in Dubai and it’s very cool and trendy. The name: Illuminati. The logo: The occult elite’s favorite symbols. 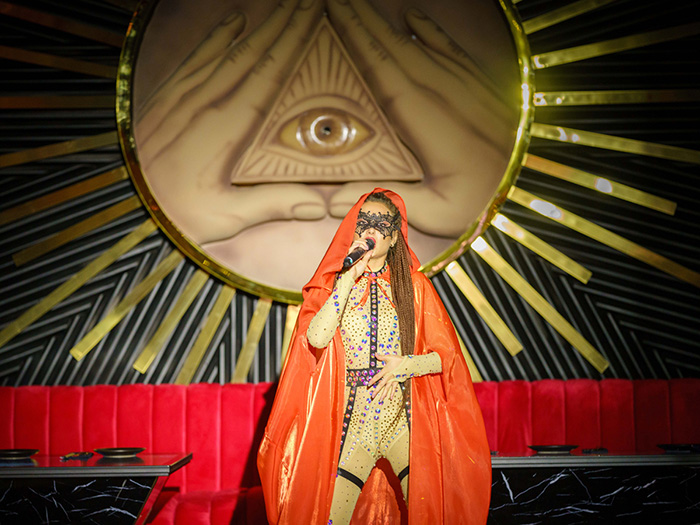 Located at V Habtoor Hotel, Illuminati is touted as “UAE’s first luxury experiential lounge”. I guess the “experience” revolves around a bunch of douchebags taking selfies in a setting that regurgitates the rituals and symbols of the occult elite. 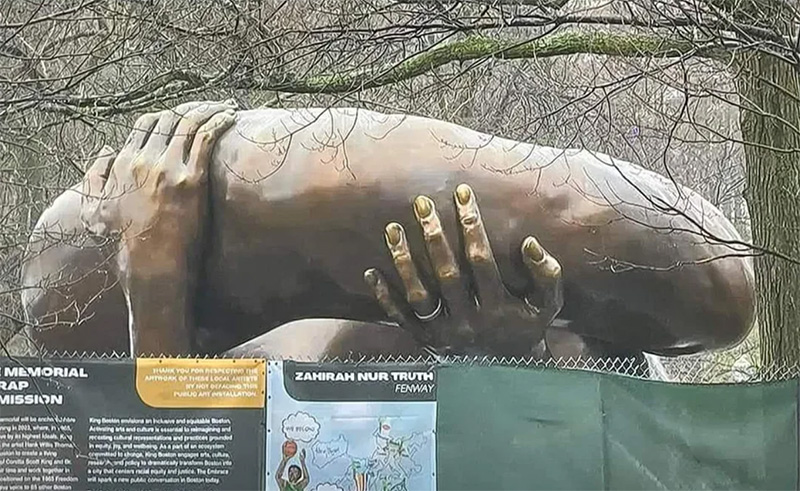 The city of Boston recently unveiled a sculpture dedicated to Martin Luther King. Its name: “Embrace Boston”. Despite its name, nobody embraced this thing. Some claim that it looks like a penis while others say it looks like a turd. No matter on which side of this debate you side with, this thing actually “embraces” an important aspect of the elite’s agenda. Last year, I posted the 1963 list of Communist Goals which describes how to destroy a nation from within. Here are two of these goals: 22. Continue discrediting American culture by degrading all forms of artistic expression. An American Communist cell was told to “eliminate all good sculpture from parks and buildings, substitute shapeless, awkward and meaningless forms.”
23. Control art critics and directors of art museums. “Our plan is to promote ugliness, repulsive, meaningless art.” This is what the sculpture is truly about. 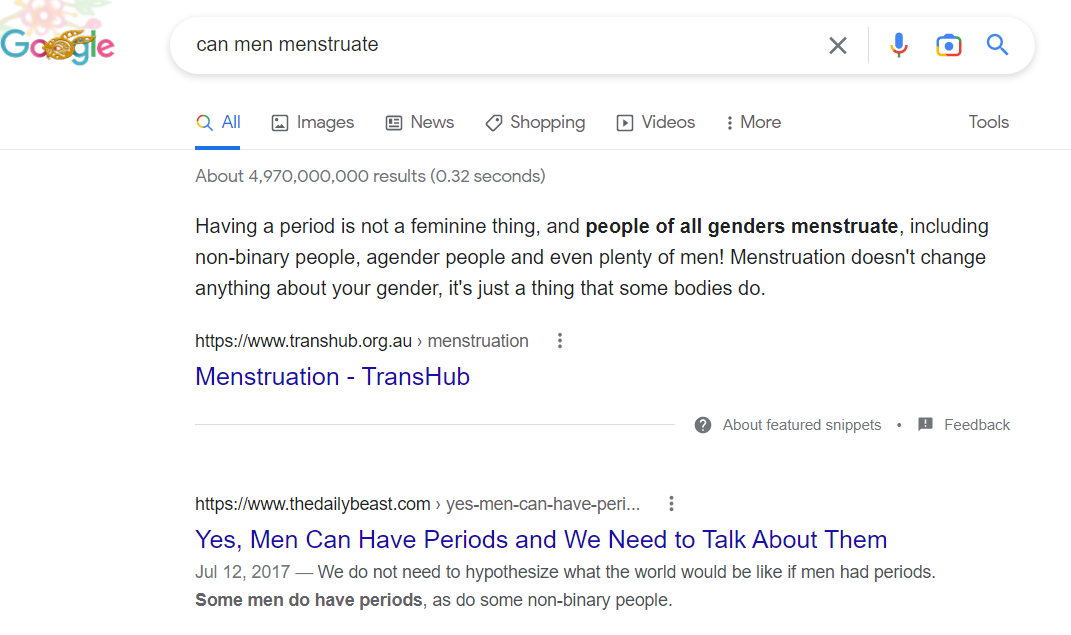 This is a screenshot of a Google search. We are living in an age of universal deceit where basic truths are repressed and outright lies are propagated. 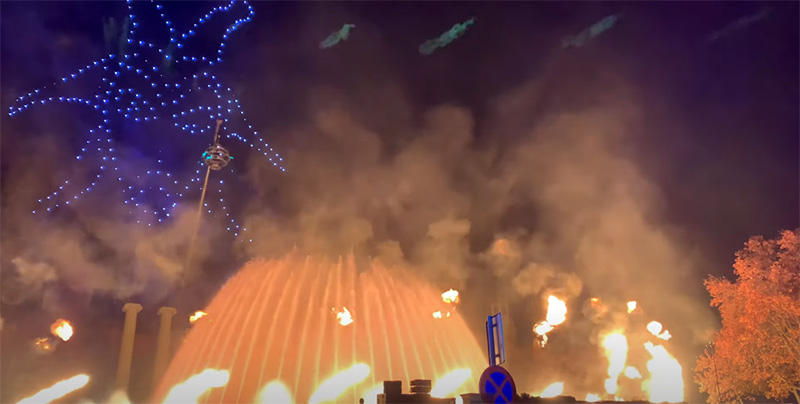 Barcelona’s New Year 2023 celebration featured some fireworks and illuminated. At one point, the head of Baphomet hovered over the city for a couple of minutes as flames rose from underneath. Who doesn’t want to start a new year with some hellish satanic symbolism? 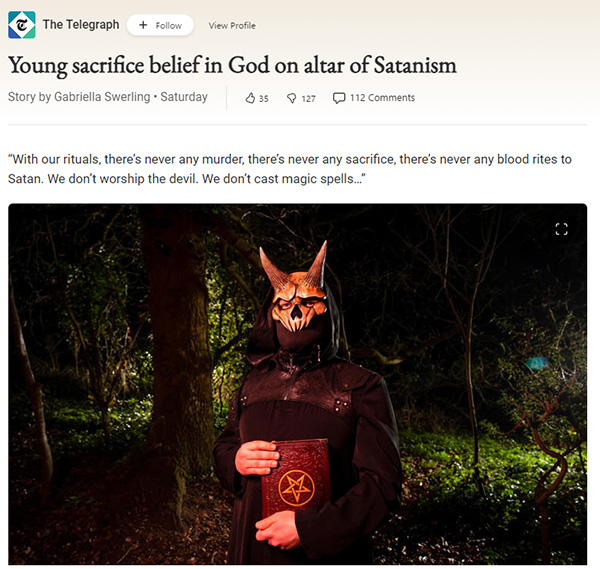 One thing we’ve learned in the past years is that mass media has a sweet spot for Satanism. Here’s yet another “news” article that celebrates young people becoming Satanists while portraying their “religions” as a fun activity for smart people with absolutely nothing dark about it. This is all about normalizing the occult elite’s true religion which is 100% dark and 100% evil.

Symbolic Pics of the Month (December 2022)