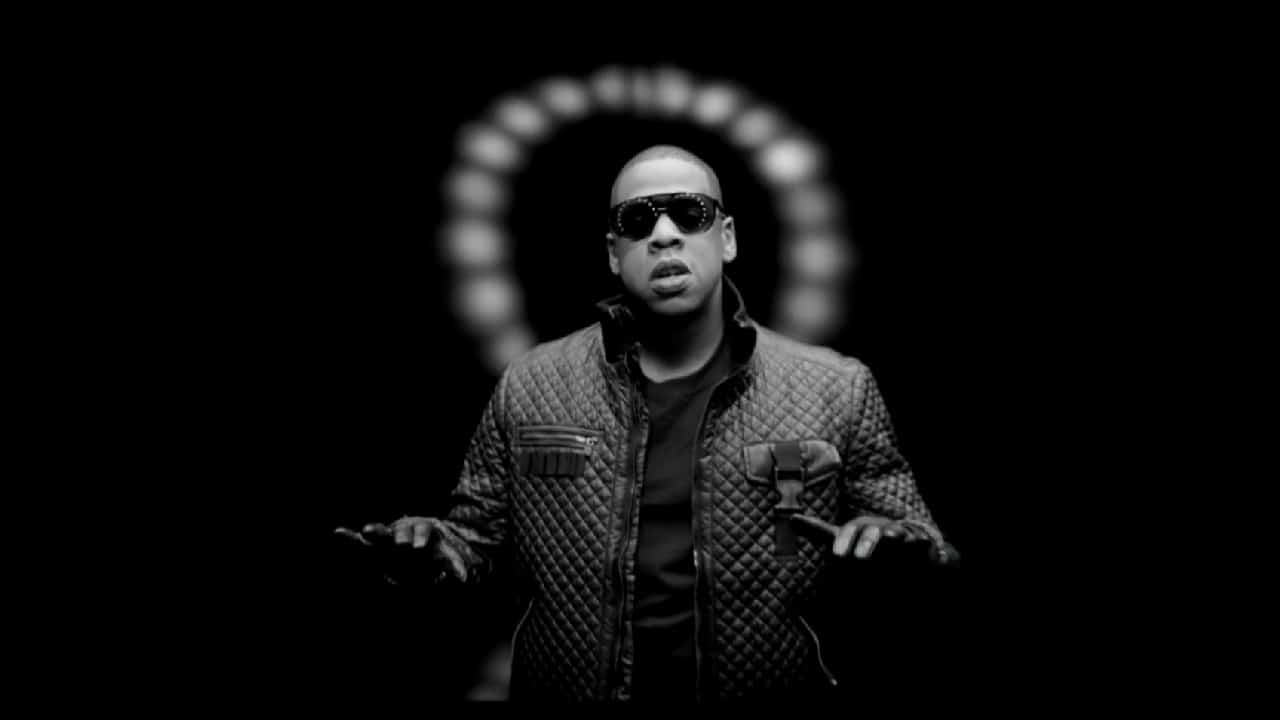 Jay-Z’s “On to the Next One” has many people wondering what’s the meaning behind the creepy images. The best way to understand the imagery is to understand the occult context in which they are used. This article takes a look at the occult meaning of the symbols found in this video in relation to Jay-Z’s affinities with secret societies.

Shortly after the American continent said goodbye to 2009, Jay-Z came on TV and said: “On to the Next One”. The video premiered on 01/01/10, which in Kabbalistic numerology equals 3 (0 + 1 + 0 + 1 + 1+ 0 = 3). The number 3 is an important theme of the video. The release date also contains three 1’s, which is reminiscent of the three bars representing Jay-Z’s album The Blueprint 3. This is just an example of the occult aura surrounding Jay-Z latest works. 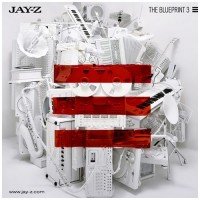 If you haven’t done so already, I strongly suggest you read my first article about Jay-Z (Jay-Z’s “Run This Town” and the Occult Connections). The article goes through some of Jay-Z’s occult influences and his affinities with secret societies. I’ve noticed an increasing number of people wondering about the “creepiness” of some of their favorite artist’s music videos. Although some of the imagery is solely there for shock value or artistic aestheticism, an important portion of the symbols found in recent videos are directly related to the music industry’s peculiar brand of occultism. As seen in other articles on this site, the same symbols keep reappearing in pop videos, whether we look at Beyonce, Lady Gaga, Rihanna, Jay-Z or whoever else will be “chosen” in the future.

Some people who read my first article on Jay-Z claimed that the symbolism I described was the result of coincidences or that I was “reading too much into it”. After viewing On to the Next One, many of the same people are now saying “he’s doing it on purpose, the symbols are too obvious”. How did something go from being accidental to being “too obvious”? It seems those who want to avoid the truth will go to any lengths to rationalize what is happening. Artists at the top level of the music industry are chosen by the elite (the common name for them is Illuminati). The initiation of the artists guarantees them success and exposure, at the cost of becoming vessels of Illuminati symbolism and personal sacrifice. If Jay-Z’s Run This Town left some people wondering if the video truly contained an underlying occult message, On to the Next One confirms Jay-Z’s affiliation with the occult elite.

Analysis of the Video

The video to On to the Next One does not contain a deep storyline and the lyrics are basically about Jay-Z bragging about how he’s a step ahead. So this analysis will mainly focus on the occult meaning of some of the images found in the video. They often appear for less than a second, I technique I like to call “semi-subliminals”. Some of them are apparently there for aesthetic purposes (unless I’ve missed something), while others are deeply occult. 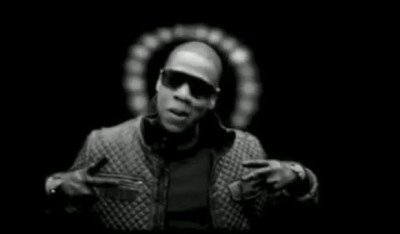 The background in the scene above incorporates strategically placed lights with Jay-Z standing right in front of them, making it appear as if he has a halo around his head. The halo is used in iconic imagery to identify holy or sacred figures. 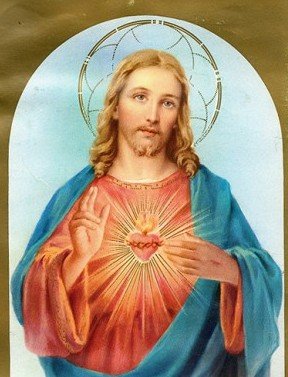 Given the dark occult theme of the video and references to Baphomet (used by the Church of Satan), the halo takes on a sinister meaning. The one who refers to himself as “HOV” or “Jay-Hova” (a reference to Jehovah, the proper name of God in Abrahamic religions) might be sending the message that he is a god in a LeVeyan satanism kind of way rather than the “black gods” of the Five-Percenters. 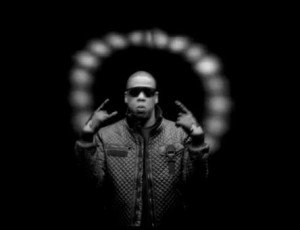 “Devil Horns” hand sign while standing in front of a halo. Can Beyonce see his Halo? 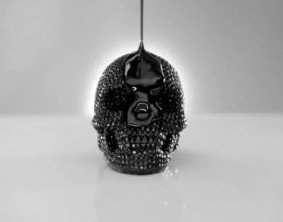 During the video, a black skull and a silver skull are displayed with liquid pouring on them. The symbol of the human skull has always been of utmost importance in occult Brotherhoods. The Knight Templars (ancestors of the Freemasons) made new members drink wine (representative of blo0d) from a human skull as part of their initiation. This practice is still found in some rites of Freemasonry.

“The Knights Templar were inveterate lovers and users of Human Skulls of all sizes and mediums, including both metallic and Crystal Skulls. The Templar identification with Human Skulls was reflected in one of the Knights’ preeminent symbols, the “Jolly Roger,” which is the recognizable pirate or poison symbol of a human skull surmounting cross bones. This symbol represented both the Templar ceremonial use of skulls as idolic images and even drinking vessels, as well as their practice of alchemy, one of the stages of which was termed “Deadhead” and represented cryptically as a human skull.

Human Skulls were popular among the Templars because they were believed to hold the spiritual power of their original owners – as well as to continually emanate this essence throughout their environment. The skull of John the Baptist discovered by the Templars during the Fourth Crusade in Constantinople was such a skull. The Templars claimed that John’s skull radiated the same kind of Holy Spirit power as it did when attached to the original body of John, and in order to empower their ceremonies and initiations they placed it on their high altars. Other human skulls particularly esteemed by the Templars were those that had been possessed by Christian saints and past grand masters of their organization. In order to amplify and conduct the power emanating from these skulls for ceremonial purposes they were often wrapped in a highly conductive metal, such as gold or silver, and then placed in energy-productive reliquaries made into the shapes of sacred geometric formations including tetrahedrons, octagons, and pyramids. References to Templar skulls wrapped in gold and silver can be found in some of the early Holy Grail legends.” – Source 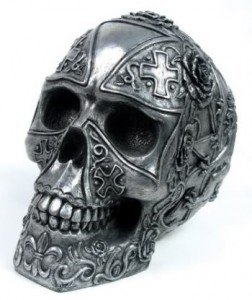 Remnants of this practice are still found in the rituals associated with the 33rd degree of some Masonic rites (i.e. the Cerneau rite) where the candidates drink wine from a human skull. What do they think of Christians drinking the “blood of Christ” during mass? That’s a whole other topic. 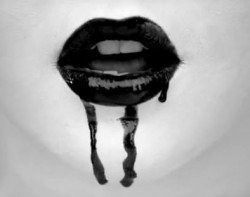 A reference to the symbolic blood drinking of occult initiations?

Two extras in the video seem to be a mix of Brandon Lee’s The Crow and Heath Ledger’s Joker in The Dark Knight. 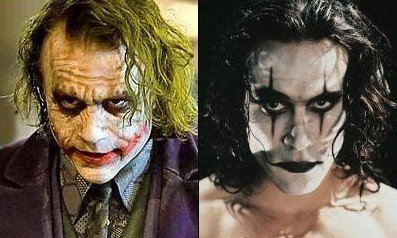 Disturbing fact: Both Heath Ledger and Brandon Lee died mysteriously during the filming of deeply occult movies. Ritual sacrifice? That is also a whole other topic. Other references to crows: 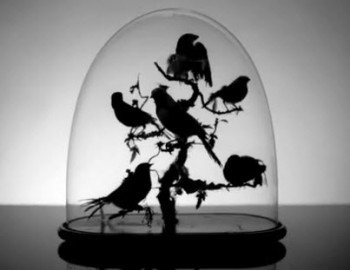 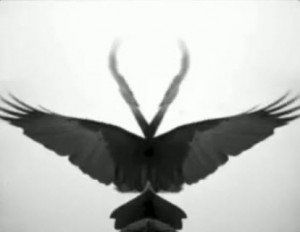 Combined with Jay-Z’s track record of not too Christian-friendly lyrics, this image is not really surprising. 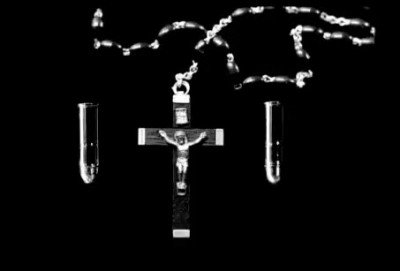 If you’ve read other articles on this website, you are aware of the usage of the likeness of Baphomet as an unmistakable mark of an “Illuminati video”. Baphomet is the horned idol reportedly worshiped by the Knight Templars and later used by the Church of Satan. Two separate Baphomet heads make short, almost subliminal appearances during the video. 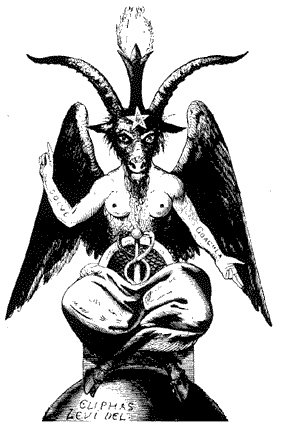 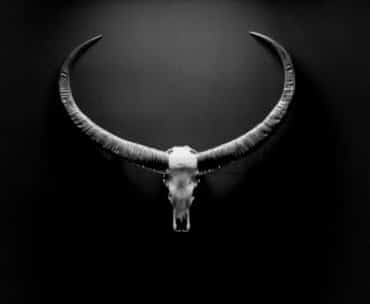 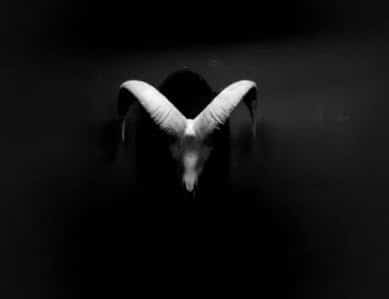 As soon as the video came out, I received tons of e-mails from people who have picked up on many of the symbols described here. This confirms two things: One, many people are becoming aware of the sinister symbolism inserted in videos and two, these symbols are becoming increasingly blatant. They are not hiding anymore. The industry WANTS to reveal its true nature. I believe there are two types of “Illuminati artists”:  the willing participants ( I would place Jay-Z and Lady Gaga in this category) and those who are clueless (Rihanna seems like the perfect example). Jay-Z, being the smart businessman that he is, knows that controversy sells. It is thus a win-win situation: Jay-Z gets the publicity he is seeking and the Illuminatus continue their mass indoctrination. But what will happen when the elites are done using Jay-Z as a vessel for their sinister symbols? Will they say ON TO THE NEXT ONE?

FacebookTwitterSubscribe
Related Topics:jay-zmusic business
Up Next

Paramore’s “Brick by Boring Brick”: A Song about Mind Control