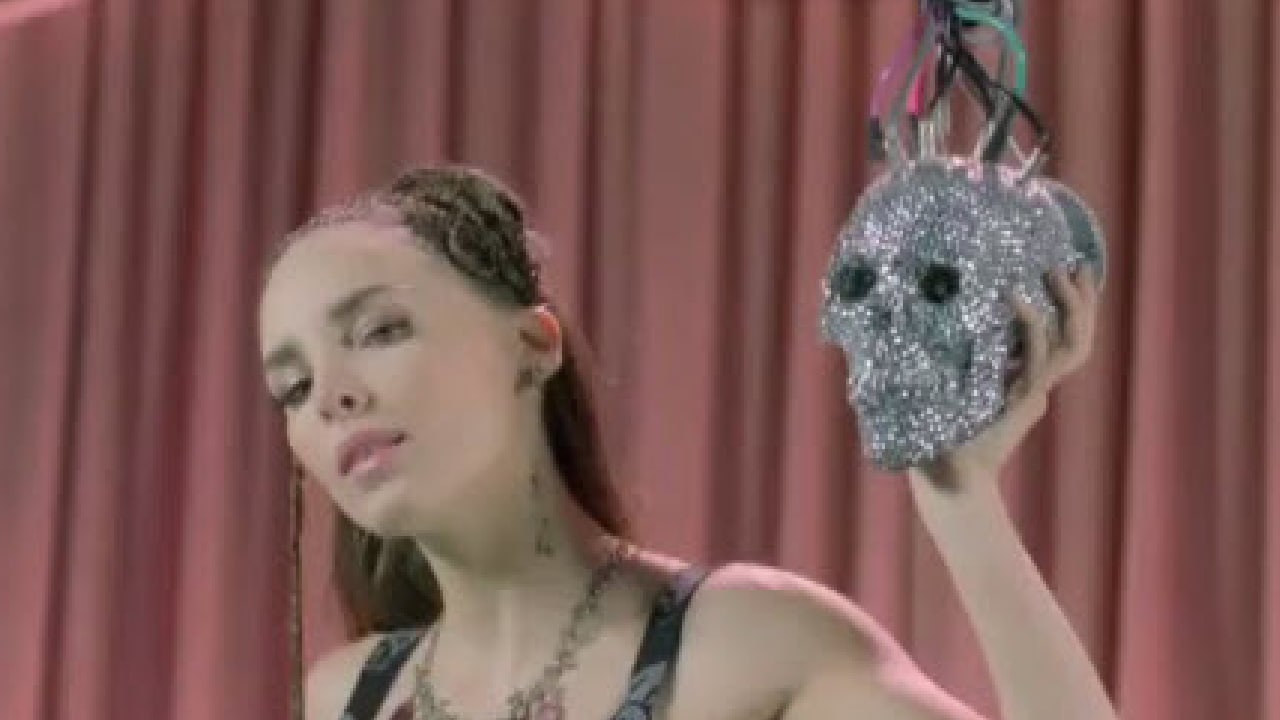 In previous articles we have covered Illuminati symbolism found in the music industries of America, Asia and Eastern-Europe. This article looks at the symbolism found in one of Latin America’s major pop stars, Belinda. We’ll examine her past role with Disney’s “Cheetah Girls” and her new video entitled “Egoista”.

One of the artists covering the Spanish speaking market is Belinda, a Mexican singer, songwriter, and actress born from a Spanish father and French mother. Her music video entitled Egoista is simply rife with what we call “Illuminati symbolism”, which are the symbols, codes, and themes associated with the occult elite’s agenda. We will see in this article that Belinda’s success is however not the result of good luck. Quite to the contrary, she was groomed to propagate the mind control agenda since her youth at the No. 1 school for teenage pop stars: Disney. 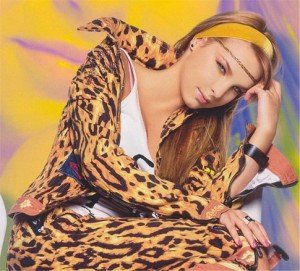 In 2006, Belinda appeared in the Disney movie Cheetah Girls 2, a movie about the adventures of a girl band. The concept behind this series of movies, which revolves around young girls wanting to meet big-time producers and make it big in the entertainment industry, barely hides the mind control associated with pop culture. The fact that the movies were produced by Disney, the ultimate recruiter of young talent who turn into sex objects around the age of 16 and the associations with Monarch mind control and sex kitten programming are all too real in Cheetah Girls. What do I mean by “recruiter of young talent who turn into sex objects”? Here’s a handy visual that describes the typical path those young Disney girls go through to stay successful. 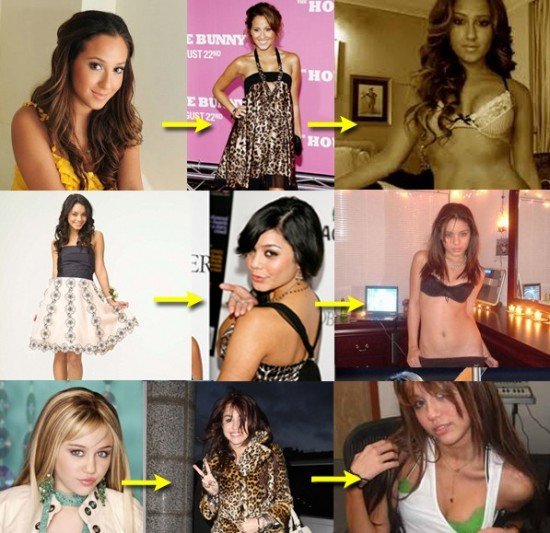 Are those “leaked” sexy pictures some sort of forced initiation rite? Belinda was part of the same type of “leaked” images ccontroversy 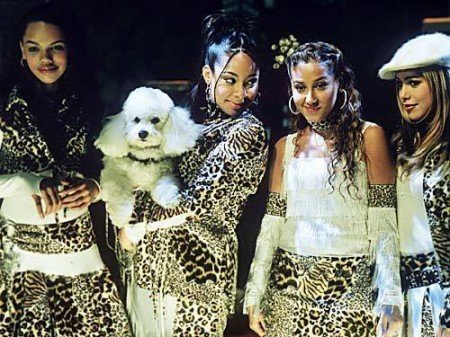 Can you get more sex-kitten programming symbolism than this?

BETA. Referred to as “sexual” programming. This programming eliminates all learned moral convictions and stimulates the primitive sexual instinct, devoid of inhibitions. “Cat” alters may come out at this level.
– Ron Patton, Project Monarch

In Cheetah Girls 2, Belinda (the subject of this article) competes with the girl band in Spain and, after a series of crazy events, becomes their friend and honorary Cheetah Girl. Grrreat! So, Belinda truly went through the ultimate school of MK entertainment slaves, Disney. 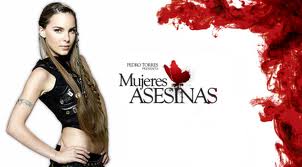 The symbol of the series is a Butterfly, symbolic of Monarch programming

After playing a role in a Beta programming (aka sex-kitten extravaganza) Disney movie, Belinda appears in the third season of the Mexican novella, Mujeres Asesinas (Killer Women), which is, in turn, a Delta programming extravaganza – also known as “killer programming”.

report this adAs the title states, the series is about women who kill for numerous reasons and their resulting police investigation. The series’ promotional material is full of Monarch mind control symbolism. 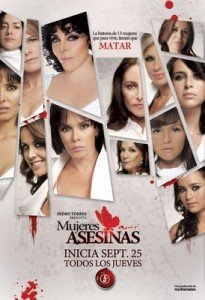 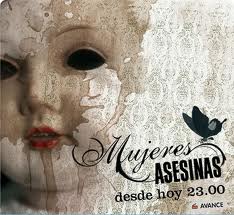 The Inevitable One Eye Symbol

One eye = All Seeing Eye = Illuminati. If you don’t know what I’m talking about, read some previous articles on this site. This sign is the unmistakable symbol of an Illuminati artist. And Belinda does it … 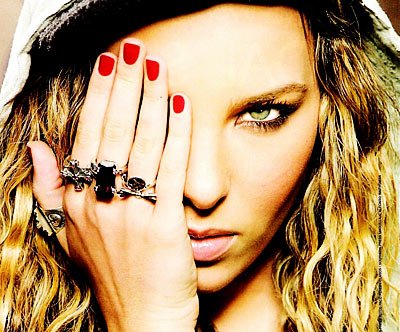 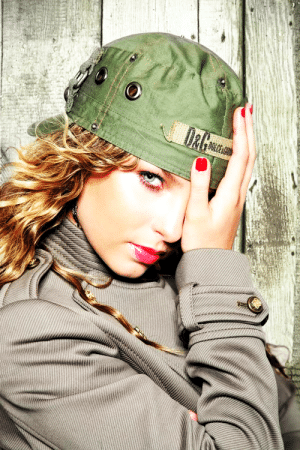 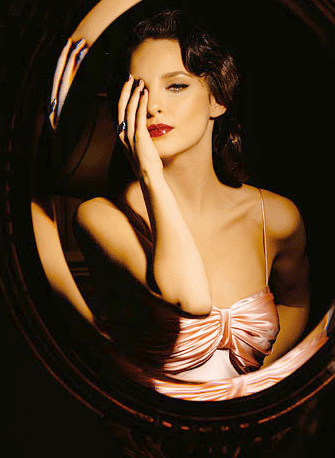 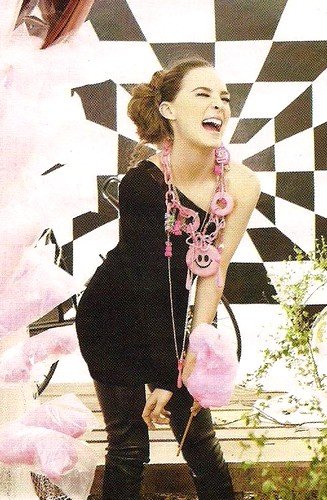 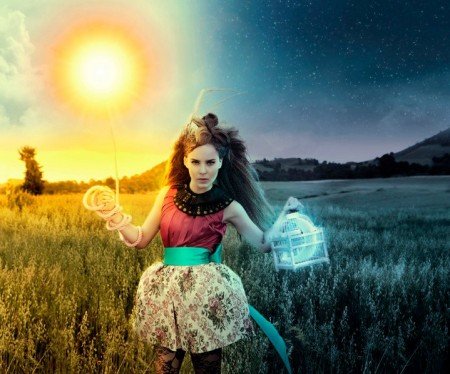 This image has some deep occult symbols that regular readers might recognize.

After going through Belinda’s impressive Illuminati mind control curriculum vitae, will the fact that her latest video, Egoista, is full of occult symbolism come as a surprise?

If you read other articles on this site, you might be flabbergasted by the similarities between this video and other pop videos appearing all over the world. Egoista seems to be an attempt to cram the most Illuminati symbols in a 3:30 video. Latins have to be exposed to this crap too, right? 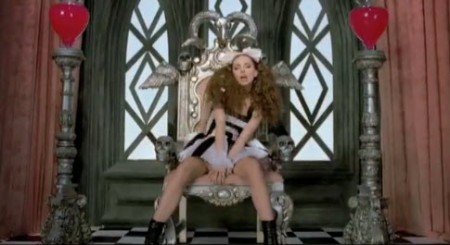 Pillars, checkerboard floors, Baphomet everything is there.

The video starts with Belinda sitting in an Illuminati/Masonic/Alice in Wonderland setting. The “princess” (mind-control victims are sometimes called that by their handlers) is enthroned between two “heart” pillars. The concept of the twin pillars is a Masonic symbol discussed many times on this site. The floor is a ritualistic Masonic checkerboard pattern that is not-so-coincidentally found in Alice in Wonderland. In arcane symbolism, checkerboard floors are the surface on which occult transformations happen, which is why they are found in Alice in Wonderland. Speaking of which, the links between Alice in Wonderland and Monarch programming are many and profound, as the movie’s storyline is used as a programming tool by mind control handlers and many symbols in the movie act as triggers on mind controlled-slaves.

“In the 1940’s and 1950’s, the Illuminati began using Disney’s Alice In Wonderland and the Wizard of Oz films as programming bases for their total mind-controlled slaves. Alice in Wonderland had been done many years earlier by the Britisher William Cameron Menzies (who also did Freemason H.G. Wells’ Masonic forecast of the New World Order entitled “Things to Come” in 1936, and the film Invaders From Mars.).
– Fritz Springmeier, Deeper Insights into the Illuminati Formula

To complete this Illuminati overload, a Baphomet-type head is strategically placed atop Belinda’s throne from hell.

All of those clues tell the viewers that Belinda is in an alternate, fantasy world, the wonderland of Alice In Wonderland and the dissociative dream-world mind control victims escape to during trauma. In other words, this whole scene represents Belinda being under Illuminati mind control. 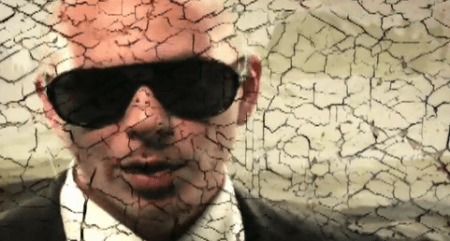 Pitbull in the “real world”, a distant and painful place for the mind control victim

Meanwhile, Pitbull raps from the “real world”, a dried up and not so inviting place (in the mind of the victim).

In another scene, Belinda is shown dancing/battling with a diamond-studded skull connected to wires, another blatant reference to mind control. I mean, the brain is directly connected to electrical wires. 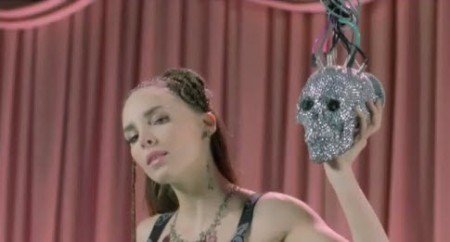 At the end of the video, Belinda is shown attempting to escape from her mind control state by jumping towards Pitbull and the “real world”. The bee-hive background probably represents the concept of “hive mind”. The attempt fails, however, as Belinda apparently liquefies. 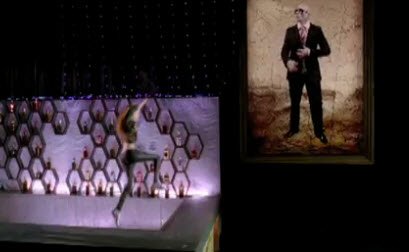 Belinda attempting to go back to the “real world”

Belinda’s Performance at the Premios Juventud (Latin awards show specifically aimed at young people) truly drives the concept of mind control home. Mechanical body parts are all over the place: sleeping pods, lifeless mannequins … all of the symbols usually associated with mind control are present. 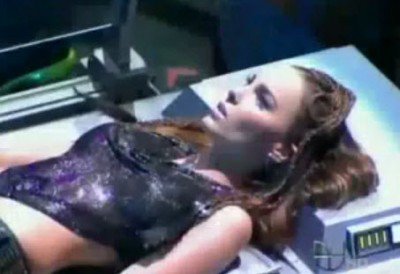 She then gets up in a mechanical, robotic matter and starts performing, with a bunch of half-human/half-robots dancing around her. The whole theme of transhumanism is a must for Illuminati artists.

Spanish is the third most-spoken language in the world (after Mandarin and English) which means this market is most certainly not exempt from Illuminati influence. Belinda’s career bears all of the telling clues of what I call an “Illuminati artist”, entertainers who often follow these steps: recruited at a young age by media corporation, marketed with a “clean” and innocent image, attracts young fans, goes through sexualization metamorphosis, releases new album with racy imagery, then exposes fans to Illuminati and mind-control themes. Although it is impossible to prove, those types of artists are, in my opinion, those who are the most likely to have gone through actual Monarch programming. Are they aware of what is happening to them and of the meaning of their performances? Probably not. Video directors, stylists, choreographs, scenic designers, music producers and label executives all have a say in these artist’s products and they, in turn, all take orders from higher-ups. “Artists” such as Belinda and her fellow pops stars–Lady Gaga, Beyonce, etc–are nothing more than performers and, if their input is sometimes integrated into the act, it is because they understand and conform to what is acceptable in the pop industry.