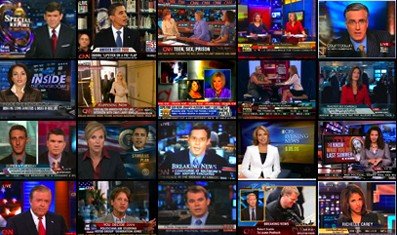 The next defense authorization bill to be proposed by the American congress contains a not-so-publicized amendment that would legalize the use of propaganda on American citizens. The bill would indeed nullify an existing law that (supposedly) protects U.S. audiences from misinformation campaigns conducted by its own government. In other words, Americans could now be subjected to the hardcore, massively manipulative and disinformation-filled propaganda that is usually reserved for foreign countries such as Iraq. Yes, the American public is the new “enemy” to brainwash and the internet will be an important battlefield.

Readers of this site might ask: “Since when Americans were NOT subjected to propaganda?”. That is a true assessment.  Most of the articles on this site effectively describe how mass media products are filled with propaganda and disinformation that is communicated to the American public. The new bill would however legalize the process, making it official and out in the open. While propaganda in the United States was always somewhat covert and disguised as something else, the new bill apparently seeks to form an actual Orwellian Ministry of Truth, where propaganda is just part of daily business. If you believe that mass media is full of BS now…there’s apparently a lot more of it coming our way soon.

Here’s an article on the “propaganda” bill.

Propaganda that was supposed to target foreigners could now be aimed at Americans, reversing a longstanding policy. “Disconcerting and dangerous,” says Shank.

An amendment that would legalize the use of propaganda on American audiences is being inserted into the latest defense authorization bill, BuzzFeed has learned.

The amendment would “strike the current ban on domestic dissemination” of propaganda material produced by the State Department and the independent Broadcasting Board of Governors, according to the summary of the law at the House Rules Committee’s official website.

The tweak to the bill would essentially neutralize two previous acts—the Smith-Mundt Act of 1948 and Foreign Relations Authorization Act in 1987—that had been passed to protect U.S. audiences from our own government’s misinformation campaigns.

The bi-partisan amendment is sponsored by Rep. Mac Thornberry from Texas and Rep. Adam Smith from Washington State.

In a little noticed press release earlier in the week — buried beneath the other high-profile issues in the $642 billion defense bill, including indefinite detention and a prohibition on gay marriage at military installations — Thornberry warned that in the Internet age, the current law “ties the hands of America’s diplomatic officials, military, and others by inhibiting our ability to effectively communicate in a credible way.”

The bill’s supporters say the informational material used overseas to influence foreign audiences is too good to not use at home, and that new techniques are needed to help fight Al-Qaeda, a borderless enemy whose own propaganda reaches Americans online.

Critics of the bill say there are ways to keep America safe without turning the massive information operations apparatus within the federal government against American citizens.

“Clearly there are ways to modernize for the information age without wiping out the distinction between domestic and foreign audiences,” says Michael Shank, Vice President at the Institute for Economics and Peace in Washington D.C. “That Reps Adam Smith and Mac Thornberry want to roll back protections put in place by previously-serving Senators – who, in their wisdom, ensured limits to taxpayer–funded propaganda promulgated by the US government – is disconcerting and dangerous.”

“I just don’t want to see something this significant – whatever the pros and cons – go through without anyone noticing,”
“ says one source on the Hill, who is disturbed by the law. According to this source, the law would allow “U.S. propaganda intended to influence foreign audiences to be used on the domestic population.”

The new law would give sweeping powers to the government to push television, radio, newspaper, and social media onto the U.S. public. “It removes the protection for Americans,” says a Pentagon official who is concerned about the law. “It removes oversight from the people who want to put out this information. There are no checks and balances. No one knows if the information is accurate, partially accurate, or entirely false.”

According to this official, “senior public affairs” officers within the Department of Defense want to “get rid” of Smith-Mundt and other restrictions because it prevents information activities designed to prop up unpopular policies—like the wars in Iraq and Afghanistan.

Critics of the bill point out that there was rigorous debate when Smith Mundt passed, and the fact that this is so “under the radar,” as the Pentagon official puts it, is troubling.

The Pentagon spends some $4 billion a year to sway public opinion already, and it was recently revealed by USA Today the DoD spent $202 million on information operations in Iraq and Afghanistan last year.

In an apparent retaliation to the USA Today investigation, the two reporters working on the story appear to have been targeted by Pentagon contractors, who created fake Facebook pages and Twitter accounts in an attempt to discredit them.

(In fact, a second amendment to the authorization bill — in reaction to the USA Today report — seeks cuts to the Pentagon’s propaganda budget overseas, while this amendment will make it easier for the propaganda to spread at home.)

The evaporation of Smith-Mundt and other provisions to safeguard U.S. citizens against government propaganda campaigns is part of a larger trend within the diplomatic and military establishment.

In December, the Pentagon used software to monitor the Twitter debate over Bradley Manning’s pre-trial hearing; another program being developed by the Pentagon would design software to create “sock puppets” on social media outlets; and, last year, General William Caldwell, deployed an information operations team under his command that had been trained in psychological operations to influence visiting American politicians to Kabul.

A U.S. Army whistleblower, Lieutenant Col. Daniel Davis, noted recently in his scathing 84-page unclassified report on Afghanistan that there remains a strong desire within the defense establishment “to enable Public Affairs officers to influence American public opinion when they deem it necessary to “protect a key friendly center of gravity, to wit US national will,” he wrote, quoting a well-regarded general.

CORRECTION: The amendment under consideration would not apply to the Department of Defense, though the it is attached to a defense authorization bill.