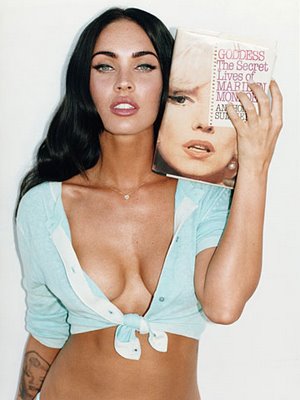 In last week’s Symbolic Pics of the Week, I posted a picture of Megan Fox featuring her Marilyn Monroe tattoo, stating that the blonde starlet was the original “MK-Ultra Sex Kitten”. Monroe became a sort of “poster girl” for the mind control-themed industry. It is almost a requirement for starlets that are “part of the agenda” to allude to the blonde icon, in one way or another, in photoshoots or videos.

Megan Fox has recently decided to remove her Marilyn Monroe. Her reasons for doing so are quite interesting: While never directly citing “mind control”, she alludes to all of the Monarch programming symptoms displayed by Monroe, stating that: “It is a negative character, as she suffered from personality disorders and was bipolar. I do not want to attract this kind of negative energy in my life.”

Here’s an article about her move.

Megan Fox, 24, has opened up about her ongoing tattoo removal of the Marilyn Monroe portrait on her right forearm.

“I’m removing it,” Fox told Italian fashion magazine Amica. “It is a negative character, as she suffered from personality disorders and was bipolar. I do not want to attract this kind of negative energy in my life.”

In the past, Fox has touted her similarities to the sex symbol, once saying that she was afraid she might die early like the screen legend.

“I basically read every book ever written about Marilyn Monroe,” Fox told Wonderland magazine in 2009. “I could end up like that because I constantly struggle with the idea that I think I’m a borderline personality – or that I have bouts of mild schizophrenia. I definitely think I have some kind of mental problem and I haven’t pinpointed what it is.”

In April, OnTheRedCarpet.com reported that “Transformers” actress’ ink showed signs of fading at the Golden Globe Awards and appeared increasingly faint at more recent appearances. The above photo shows Fox’s tattoo at the Golden Globe awards in January and before treatment, at the 2009 at the Teen Choice Awards.

Fox still has several tattoos that haven’t been touched, including “We will all laugh at gilded butterflies” on her right shoulder, which is a quote from Shakespeare’s “King Lear” and “there once was a little girl who never knew love until a boy broke her heart” on her ribs.