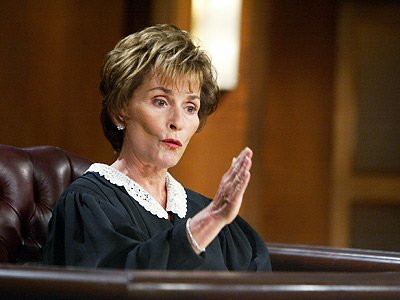 On March 30th, Judge Judy had to stop taping her show and was rushed at the hospital because “she started saying things that didn’t make any sense”. This would probably be an insignificant event if it wasn’t for the fact that, in the span of four weeks, three other TV personalities talked gibberish in a similar fashion.

An incoherent Judge Judy told shocked audience members she “needed to stop” one of her made-for-TV cases because she was “not feeling well,”.

“She was just sitting on the stand during her show taping and she started saying things that didn’t make any sense,” a source close to the situation told RadarOnline.com, exclusively.

The 68-year-old judge was only two cases deep into her taping when her bizarre behavior prompted her to stop and have a crew member call 911.

“She said couple of sentences that didn’t have anything to do with the case and then she stopped speaking and said she wasn’t feeling well,” the source said.

“The stage manager called the paramedics and they came and took her away.”

The Los Angeles City Fire Department confirmed to that a paramedic ambulance was dispatched to the KTLA Studios in Hollywood, where Judge Judy tapes her show, at 9:12 a.m. today.

Sheindlin’s rep, Gary Rosen, confirmed that the judge is in the hospital and will be staying overnight for observation.
“The judge was feeling nauseous and had some intestinal discomfort and decided to go to the hospital to get it checked out,” Rosen said.

“They are keeping her overnight for tests.”

Here are the other “gibberish incidents”. You’ll probably notice that the breakdowns are very similar.

Spontaneous-gibberish-talking is not the symptom of any known illness. Some have claimed those were MK-Ultra breakdowns. Can Judge Judy be under trauma-based mind control at the age of 68? I strongly doubt it. What is causing this?