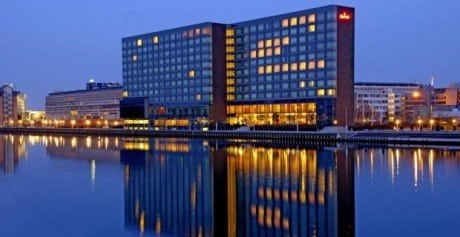 The 2014 Bilderberg meeting is taking place at the Marriott Hotel in Copenhagen. As usual, the meeting gathers some of the world’s most powerful people from the financial, political and business worlds, not to mention representatives of mass media and elite think tanks. As usual, the result of the discussions are completely secret.

Official items on the agenda include “The future of democracy and the middle-class trap”, “The new architecture of the Middle East” and the major geopolitical crisis of the moment: “Ukraine”. Several topics that are less PR-friendly will evidently be discussed such as the evolution of a globalized world order.

As David Rockefeller, a Bilderberg veteran stated in his memoirs:

“Some even believe we are part of a secret cabal working against the best interests of the United States, characterizing my family and me as ‘internationalists’ and of conspiring with others around the world to build a more integrated global political and economic structure — one world, if you will. If that is the charge, I stand guilty, and I am proud of it.”
– David Rockefeller, “Memoirs”

Thomas Leysen – Chairman of the Board of Directors, KBC Group

CHN Liu, He Minister, Office of the Central Leading Group on Financial and Economic Affairs

Søren-Peter Olesen – Professor; Member of the Board of Directors, The Carlsberg Foundation

Jørgen Huno Rasmussen –  Chairman of the Board of Trustees, The Lundbeck Foundation

Risto K. Siilasmaa – Chairman of the Board of Directors and Interim CEO, Nokia Corporation

George Zanias – Chairman of the Board, National Bank of Greece

Benoît Coeuré – Member of the Executive Board, European Central Bank

Ahmet Üzümcü – Director-General, Organisation for the Prohibition of Chemical Weapons

Simon Coveney – Minister for Agriculture, Food and the Marine

Gerrit Zalm – Chairman of the Managing Board, ABN-AMRO Bank N.V.

H.R.H. Princess Beatrix of the Netherlands

H.M. the Queen of Spain

Wallenberg, Marcus Chairman of the Board of Directors, Skandinaviska Enskilda Banken AB

Taftalı, A. Ümit Member of the Board, Suna and Inan Kiraç Foundation

Osborne, George Chancellor of the Exchequer

Robert B. Zoellick – Chairman, Board of International Advisors, The Goldman Sachs Group

Lana Del Rey Says She Wants to Join the 27 Club