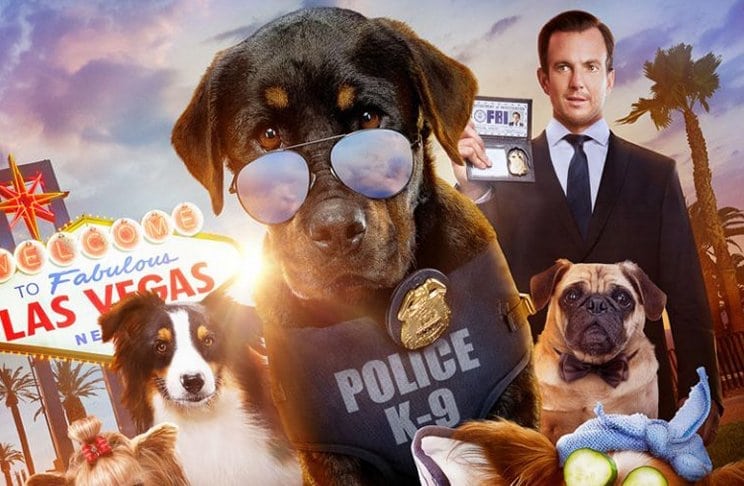 The PG movie Show Dogs contains scenes of “unwanted genital touching” on a talking dog who is told to “go to a zen place”.

Show Dogs is a family comedy about the unlikely pairing of a human detective (voiced by Will Arnett) and his partner Max (voiced by Ludacris), a talking dog who goes undercover at a dog show to solve a case.

As if this premise wasn’t horrible enough, the movie contains bizarre scenes where the dog protagonist has to allow a stranger to grope his genitals in order to complete his mission. According to the National Center on Sexual Exploitation (NCOSE) these scenes send “a troubling message that grooms children for sexual abuse”.

Since the inspection of the private parts will happen in the finals, Frank touches Max’s private parts to get him use to it. Of course, Max doesn’t like it and snaps at Frank for him to stop. Max is then told by the former champion, who has been through the process before, that he needs to go to his ‘zen place’ while it happens so he can get through it. More attempts are made by Frank to touch Max’s private parts, but Max is still having trouble letting it happen and keeps snapping at him.

The day of the finals come and if Max doesn’t let his private parts be touched, he may lose the competition and any hope of finding the kidnapped panda. It all rests on his ability to let someone touch his private parts. The judge’s hands slowly reach behind Max and he goes to his ‘zen place,’ He’s flying through the sky, dancing with his partner, there are fireworks and flowers-everything is great-all while someone is touching his private parts.”

The “zen place” scene – where Max dances in the sky while he’s being groped – alludes to dissociation. Some of the most sadistic practices known to man (notably Monarch Programming) involve subjecting children to trauma in order to cause dissociation, rendering them extremely vulnerable and suggestible. These scenes appear to normalize this horrific process used by child abusers.

Dawn Hawkins, the executive director of the NCOSE stated that her organization objects to “multiple scenes where a dog character must have its private parts inspected, in the course of which the dog is uncomfortable and wants to stop but is told to go to a ‘zen place’.”

“The dog is rewarded with advancing to the final round of the dog show after passing this barrier. Disturbingly, these are similar tactics child abusers use when grooming children: telling them to pretend they are somewhere else and that they will get a reward for withstanding their discomfort.

Children’s movies must be held to a higher standard, and must teach children bodily autonomy, the ability to say ‘no’ and safety – not confusing messages endorsing unwanted genital touching.”

The NCOSE asked the production company Global Road Entertainment to edit out the problematic scenes. In a statement to CNN, the company defended the movie:

“The dog show judging in this film is depicted completely accurately as done at shows around the world, and was performed by professional and highly respected dog show judges. Global Road Entertainment and the film-makers are saddened and apologize to any parent who feels the scene sends a message other than a comedic moment in the film, with no hidden or ulterior meaning, but respect their right to react to any piece of content.”

Although it is technically correct that dogs have their genitals inspected in actual dog shows, Show Dogs was never meant to be a fully accurate documentary about the world of dog shows. It is a children’s movie featuring a talking dog who feels human emotions. The viewers are meant to identify with the protagonist and this protagonist apparently needs to be groped in order to resolve the story.

Max Botkin, one of the chief writers of the movie, denied writing any of these scenes, claiming that the movie was “heavily rewritten by 13 other writers”, 12 of whom are uncredited. He added that he “didn’t get to see the film until it was in its final stage of completion and had zero say in creative choices”.

In a statement Botkin wrote:

“I absolutely condemn any suggestion or act of non-consensual touching in any form, as well as disassociation as a coping mechanism for abuse of any kind. I understand and EMPATHIZE with the parents’ and groups’ concerns regarding the message the movie may impart.”

Some critics brushed over the controversy, believing that the movie was meant to entertain children who love potty jokes.

“Max’s transformation necessitates getting his rear end waxed and learning to stay completely still when his private parts are inspected.

Along with a blast of canine flatulence, those bits are aimed squarely at preschool viewers who still think bathroom and crotch jokes are the apex of hilarity”.
– Variety, Film Review: ‘Show Dogs’

These scenes could indeed be interpreted as nothing more than innocent potty jokes. However, there is one unavoidable fact that we must consider: Hollywood is infested with child predators who actively seek out vulnerable children in order to groom them for systematic abuse. The documentary An Open Secret explains this disgusting process in great detail (watch it here). Knowing this fact, it is difficult not to be troubled by this Hollywood movie turning a known grooming process into a joke.

The Eerie Similarities Between the Deaths of Kate Spade, Alexander McQueen and L’Wren Scott

The 2018 Met Gala: Because the Industry Loves Blasphemy