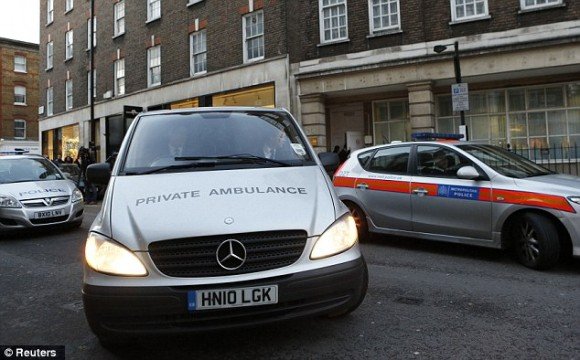 One of the first “commoners” to be somewhat in contact with Kate and William’s unborn baby is found dead shortly afterwards in suspected “suicide”. The events leading to this death are quite strange.

Nurse Jacintha Saldanha took a prank call made by an Australian radio station impersonating the Queen and transferred it to another nurse who divulged personal information about Kate’s health. According to news sources, this faux-pas might have caused her to take her own life shortly afterwards.

It is way too early to advance any kind of conclusion regarding this story, but its premise is rather suspicious. I hope we are not looking at some kind of ritual sacrifice.

A nurse who was duped into transferring a prank call from two Australian radio presenters at the hospital treating the Duchess of Cambridge for severe morning sickness was found dead in a suspected suicide.

Jacintha Saldanha, 46, a nurse at the King Edward VII’s Hospital in central London, answered the call at 5.30am on Tuesday from the Sydney-based 2Day FM station, whose DJs pretended to be the Queen and Prince Charles. Ms Saldanha put them through to a colleague who provided details of the Duchess’s condition.

Mrs Saldanha was found unconscious at a nurses’ residence close to the private hospital in Marylebone, central London, at about 9.35am this morning and despite the efforts of paramedics could not be revived. Scotland Yard said the death was not being treated as suspicious, and a source said officers were investigating whether she had taken her own life. Mental health experts cautioned against any assumptions about factors contributing to her death.

The nurse, a mother-of-two who started working at the hospital in 2008, is the first member of staff heard to answer on a recording of the hoax call from presenters Mel Greig and Michael Christian.

Ms Greig, seeking to impersonate the Queen, asked to be put through to “my grand-daughter”, prompting Mrs Saldanha to reply: “Oh yes, just hold on ma’am.”

The hospital, which is rated as one of London’s best private medical establishments and has a reputation for closely guarding the privacy of its patients, spoke of its shock and “very deep sadness” at the death of Ms Saldanha, whose partner and two sons live in Bristol. Her family said last night: “We as a family are deeply saddened by the loss of our beloved Jacintha.”

In a statement, the hospital said: “She was an excellent nurse and well-respected and popular with all of her colleagues.

“We can confirm Jacintha was the victim of a hoax call to the hospital. The hospital had been supporting her throughout this difficult time.”

Lord Glenarthur, the hospital’s chairman, added: “This is a tragic event. Jacintha was a first class nurse who cared diligently for hundreds of patients during her time with us.”

The radio prank, which was pre-recorded and vetted by lawyers from the radio station before it was broadcast, was picked up by media worldwide and acutely embarrassing for the hospital, which has a long history as the hospital of choice for the royal family.

In a statement earlier this week, the hospital’s chief executive John Lofthouse condemned the prank, adding: “We take patient confidentiality extremely seriously and we are now reviewing our telephone protocols.”

Mr Lofthouse added: “I think this whole thing is pretty deplorable; our nurses are caring, professional people trained to look after patients, not to cope with journalistic trickery of this sort.”

The hospital offers its VIP patients private lines that are connected directly to their rooms but the Australian DJs were able to reach the Duchess’s personal nurse via the switchboard in an apparent breach of procedure.

It is understood that Mrs Saldanha, who was registered to practice in Britain in July 2003, had not been disciplined or suspended by the hospital.

She answered the hospital’s phone line in her role as duty nurse because there was no receptionist manning the switchboard at the time of the call.

St James’s Palace said that neither Prince William and his wife nor any royal staff had complained to the hospital about the prank, adding that they had offered their “full and heartfelt support” to staff and to the nurses involved.

The couple, who had to announce that they are expecting their first child sooner than planned after Kate was hospitalised with acute morning sickness on Monday, said that they were “deeply saddened” by Mrs Saldanha’s death. A spokesman at St James’s Palace said: “Their Royal Highnesses were looked after so wonderfully well at all times by everybody at King Edward VII Hospital, and their thoughts and prayers are with Jacintha Saldanha’s family, friends and colleagues at this very sad time.”

While little information about Mrs Saldanha’s mental health was available, nurses’ leaders last night suggested that there could be a link between her death and the prank.

Dr Peter Carter, chief executive of the Royal College of Nursing, said: “It is deeply saddening that a simple human error due to a cruel hoax could lead to the death of a dedicated and caring member of the nursing profession.”

In a statement, the ambulance service said: “We were called at 9.25am this morning to an address on Weymouth Street. We sent two ambulance crews and a duty officer. Sadly the patient, a woman, was dead at the scene.”

The owners of the Sydney radio station said last night that the two presenters were “deeply shocked” at the nurse’s death and had agreed to stop broadcasting until further notice.

FacebookTwitterSubscribe
Related Topics:royal family
Up Next

Ke$ha Claims She Was Forced to Sing “Die Young”