Described as the “biggest data leak in modern journalism”, the Panama Papers reveal global corruption of the financial elite. This “leak” is however carefully controlled and targeted towards specific individuals in order to serve the true elite’s agenda.

An anonymous source contacted journalists around the world a year ago and provided them with over 2.6 terabytes of data from Mossack Fonseca, a notorious Panamanian law firm which sells anonymous offshore companies to the financial elite. The documents were obtained by the German newspaper Suddeutsche Zeitung (SZ) and shared with the International Consortium of Investigative Journalists (ICIJ).

Although the leak reveals a gigantic system of global corruption around the world, it curiously names very few powerful figures in the U.S., Britain and the Western world. On the other hand, many of the “wrongdoers” happen to be “outsiders” or at odds with the Western elite. In fact, many of the people named by the leak are associated with regimes that the elite is looking to destabilize. Are the Panama Papers carefully orchestrated to target specific individuals? 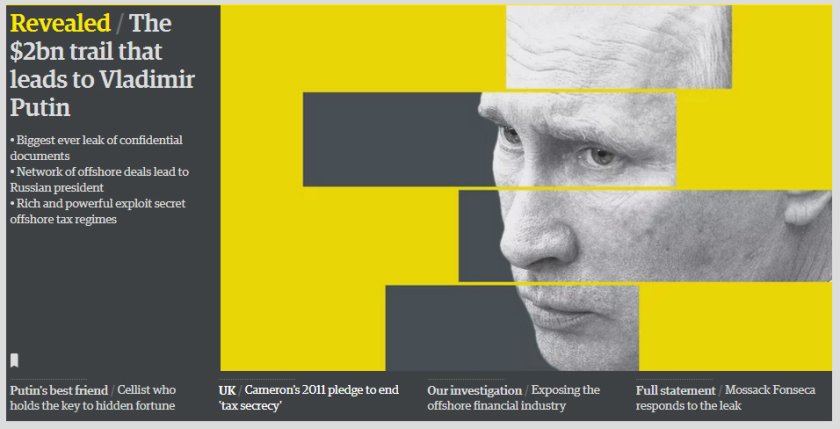 Media coverage from British paper The Guardian focused on Vladimir Putin – although he was not mentioned directly in the Papers. Meanwhile, David Cameron’s father is.

What are the Panama Papers About

The Panama Papers claim to expose the financial secrets of heads of state, athletes, billionaires and drug lords. Dating as far back as 1977, the records come from a little-known but highly influential Panama-based law firm called Mossack Fonseca, which has 500 staff working in 40-plus countries. The firm is one of the world’s top creators of shell companies — corporate structures that can be used to hide ownership of assets. Here is a nice vulgarization of the scandal posted on Reddit.

In business, you can avoid taxes by investing in something. If a company makes one million dollars, but spends 500,000 on investing in new technology for their product or something like that, they’re only taxed from the remaining 500,000 because that’s all of their “profit.” (I’m not a businessman so I’m not sure on the complete legality of all the kinds of spending but I think this is a basic summary). This is all normal and fine; all companies require investing in order to grow their company.

So a company in Panama basically made a business in creating fake businesses. Companies could “invest” million of dollars and then it wouldn’t be taxed, because according to legal documents it isn’t profit, it’s an “investment,” which is untaxable, and then they would get their money back from the fake business. So imagine if that $500,000 of investments from my above example was fake, and after awhile 90% of the money was given back to the business (I’m assuming the Panamian company took a cut of the money as payment). 2.6 TB of data in total, over 11 million documents and over 200,000 fake companies. According to the website that published the news of the leak, they were contacted by an anonymous source with encrypted files with the data sometime in 2015. Here’s am exerpt from the article:

Over a year ago, an anonymous source contacted the Süddeutsche Zeitung (SZ) and submitted encrypted internal documents from Mossack Fonseca, a Panamanian law firm that sells anonymous offshore companies around the world. These shell firms enable their owners to cover up their business dealings, no matter how shady.

Many political leaders (many seem to be in the Middle East), and celebrities are involved as well. To prevent any one person from being blamed for the leak, hundreds of news organizations are going to release further full details tonight (that’s what Ive heard, not sure how true it is) but the list apparently has thousands of people/companies on it. There’s 11 million documents though, and even though hundreds of journalists have been going through the data for months, there’s still information that has yet to come to light.
– Reddit, Panama Papers

How the Story Serves Elite’s Interests

Although the allegations in the above video are serious and disturbing, one can’t help but notice that it mainly focuses on Russia and Uganda. In fact, the media spin of the leaks does not focus on the true world elite –   part of organizations such as the Trilateral Commission and the Council of Foreign Relations (CFR).

A perfect example of how mass media is spinning the story can be found in USA Today. Under the title “Panama Papers read like Who’s Who of world power”, the paper lists some of the main culprits. It doesn’t take long to realize that the title should actually be : “Panama Papers read like Who’s Who of regimes world power is looking to destabilize”. Here’s USA Today’s list.

Though his name does not appear on any of the records, Putin’s associates are cited frequently as having profited from or participating in a sprawling network of secretive financial dealings.

Among them, according to ICIJ, was world-class cellist Sergei Roldugin, a friend of Putin’s, who was reportedly listed as owner of offshore companies that received tens of millions of dollars in shadowy payments and secured control over a substantial part of Russia’s TV advertising business. ICIJ said “the evidence in the files suggests Roldugin is acting as a front man for a network of Putin loyalists — and perhaps for Putin himself.”

Other Putin associates cited included childhood friends and billionaire brothers Arkady and Boris Rotenberg, who collectively owned at least seven British Virgin Islands companies that invested in a pipeline construction company and acquired machinery to build a villa in Tuscany, Italy, for Arkady’s son, Igor, as well as other activities.

His two cousins, Rami and Hafez Makhlouf, who have been the target of international sanctions and are suspected of controlling key gateways to Syria’s oil and telecom business, held numerous offshore accounts through which they filtered investments such as telecommunications assets.

Deng Jiagui, the brother-in-law of China’s current leader, became sole owner of British Virgin Islands companies called Best Effect Enterprises Ltd. and Wealth Ming International Limited in September 2009, according to ICIJ. Though ICIJ says it’s unclear what those companies were used for, Deng took possession of the companies while Xi was a member of the nine-person Politburo Standing Committee that rules China. Deng and his wife held hundreds of millions of dollars in assets, according to a 2012 Bloomberg report.

While Russian troops invaded eastern Ukraine in August 2014, he is accused of  having become the sole owner of a British Virgin Islands firm called Prime Asset Partners Limited, set up through Mossack Fonseca as a holding company with assets that include a European candy factory. Before taking office in 2014, Poroshenko’s assets included auto plants, a TV channel, a chocolate business and a shipyard.

While mayor of Buenos Aires, Macri did not disclose his position as a director of Fleg Trading Ltd., which was incorporated in the Bahamas in 1998, according to ICIJ.

He owned a British Virgin Islands-based trust called Lynden Management Ltd. that was established by Credit Suisse and came under scrutiny for the murky source of its funds, according to ICIJ.

The former journalist and radio host and his wife, Anna Sigurlaug Pálsdóttir, held nearly $4 million in bonds in three Icelandic banks through Wintris Inc., a British Virgin Islands shell company, according to ICIJ. He failed to disclose his 50% stake in Wintris when he took office in 2009 and is said to have sold his share in the company to his wife for a $1 at the end of 2009, according to the report.

He held several investment companies based in Panama, including two he co-owned with then-Qatar Emir Hamad bin Khalifa, and previously held several companies in the Bahamas and British Virgin Islands, including one through which he managed a $300 million yacht named Al Mirqab.

Cameron’s late father, Ian Cameron, avoided British taxes for 30 years on his investment fund, Blairmore Holdings Inc., according to the U.K. Guardian, part of the network of organizations that reported on the Panama Papers. Ian Cameron’s fund employed as many as 50 Caribbean experts annually to sort through red tape for Blairmore, which was based in the Bahamas but incorporated in Panama, the U.K.Guardian reported.

There was no particular allegation of wrongdoing against Blairmore, and David Cameron’s office said the prime minister has fought tax-avoidance schemes as a public policy.

The world-famous athlete and his father, Jorge Horacio, held an offshore company called Mega Star Enterprises that Mossack Fonseca registered in 2012, according to the U.K. Guardian.

Though offshore accounts are not illegal, the Guardian noted, Messi and his father have been accused by Spanish authorities of tax evasion for alleged involvement in shell companies based in Uruguay and Belize. They have denied those accusations, according to the Guardian. Messi, a native of Argentina, plays on Barcelona’s soccer team.

With the exception of David Cameron’s father, there is a distinct lack of figures from the true world elite. On the official website of the ICIJ, the main culprits are clearly listed, complete with their faces.

Although corruption is undoubtedly rampant in these regimes, why are the culprits of the Papers either puppet states or somewhat at odds with the true world elite? Is this “leak” actually an underhanded attempt to destabilize specific forces?

Like most mass media “leaks”, the information released has been carefully curated and controlled by the powers that be in order to serve a specific agenda . Under the guise of “investigative journalism”, pressure is put on a specific set of regimes and individuals. Meanwhile, the true elite, the one that takes part in  the Trilateral Commission, the Bilderberg meetings, the CFR and so forth are exempt from the scandal.

While the masses are lead to think that they are learning the ugly truth about the world elite, they are actually being served a small part of the picture. What do you expect? The biggest scammers in the world happen to own the newspapers that “leaked” the Panama Papers.

FacebookTwitterSubscribe
Related Topics:panama papers
Up Next

Wrong Side of the Industry: The Bizarre Breakdown of Katt Williams