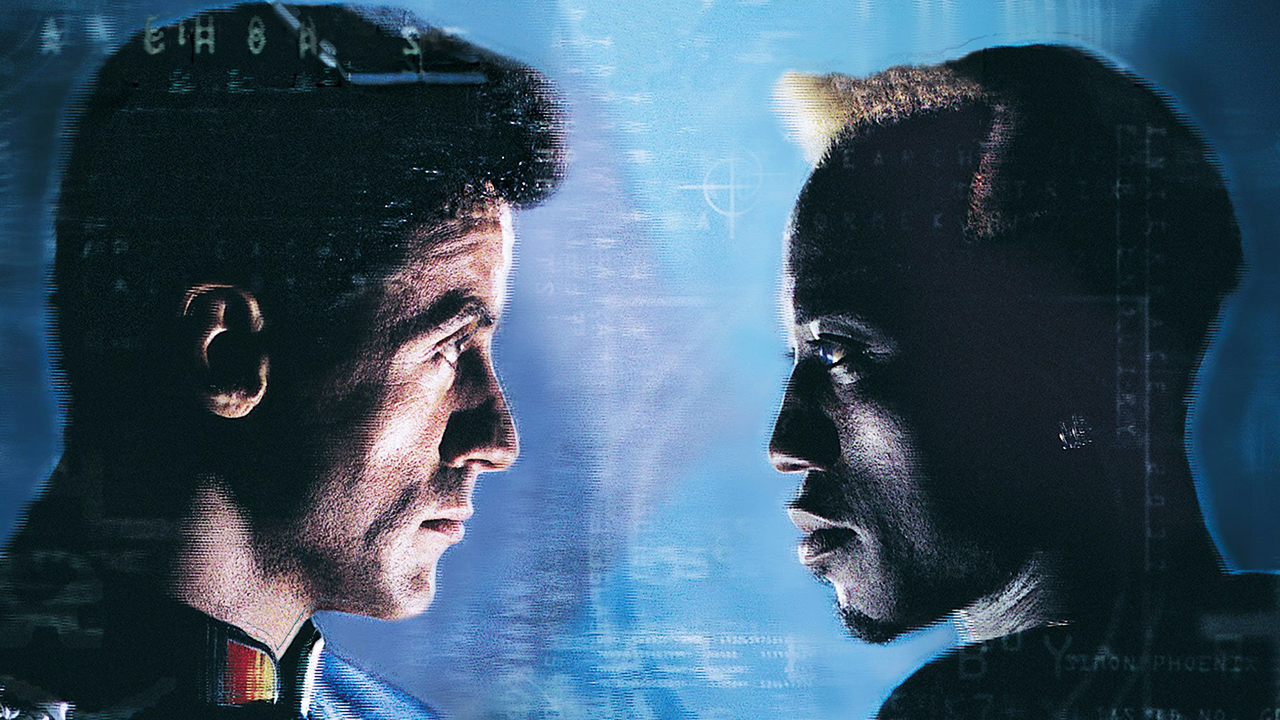 When I want to relax and take my mind off things, I like to watch movies from the 20th century, especially the 1990s. As someone who grew up in this magical decade, immersing myself in 90s nostalgia is like a balm to my soul. I mean, everything about the 90s was better. Fun things were fun. Cool things were cool. And, in my opinion, society was just saner and happier.

So when I recently came across the 1993 movie Demolition Man, I could not resist. Is there anything more 90s than Wesley Snipes fighting Sylvester Stallone while wearing denim overalls?

But watching this movie in 2022 ended up being a bizarre, mind-bending experience.

First, the movie takes place in 2032, which is only ten years from now. In other words, we are currently much closer to the “future” of the movie than to the year it was actually made. Second, the “future” depicted in the movie pinpoints, with near-prophetic accuracy, everything wrong in society right now. And it is ridiculing it – as if it is laughing at us from the past.

In Demolition Man, a tyrannical doctor oversees a tightly controlled “utopia”, where every aspect of life is monitored and heavily regulated. Sylvester Stallone’s character, who was cryogenically frozen since 1997, barges into that future and hates every single part of it. So I’m sitting there, trying to relive the 90s by watching a movie, realizing that the movie is about a dude in 2032 who wants to go back to the 90s. It’s all rather mind-bending.

While I like to idealize the 90s, a lot of today’s tendencies originated from that decade. At the time of the movie’s release, political correctness was bourgeoning in media, technology was leaping into the information age, AIDS was a worrying epidemic and Los Angeles was the site of social unrest. Through comedy and satire, Demolition Man depicted a future where a tyrannical figure exploits these elements to an absurd degree to usher in a “brave new world”. And we’re living it now. And, in some ways, our “future” is worse than what we see in the movie.

Demolition Man is the only movie directed by Marco Brambilla, an artist who is mostly known for his elaborate art installations. As explained in my article about Kanye West’s video Power (directed by Brambilla) his works are rife with symbolism. This is one of his latest art installations. 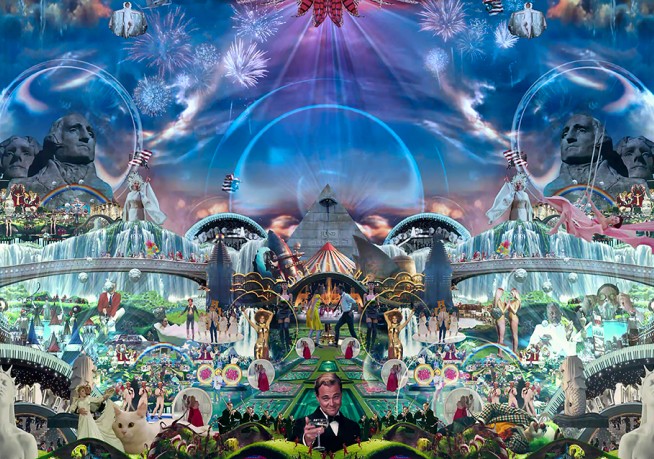 The artwork above is described as a “deconstruction of Hollywood”. About thirty years ago, Brambilla was actually directing a Hollywood movie. And, after being dismissed as a mediocre action flick, Demolition Man went on to become a visionary cautionary tale against the dystopian tendencies of the elite.

Here’s a look at Demolition Man and its astounding predictions about today.

In Demolition Man, a violent criminal named Simon Phoenix (played by Wesley Snipes) is sentenced to be cryogenically frozen for 70 years. In 2032, he is thawed for his parole hearing but he ends up escaping the facility.

Phoenix finds himself in a “utopian”, non-violent future where guns are banned (they can only be found in museums). At one point, he sums up the situation:

“The year is 2032. And I’m sorry to say that the world has become a p*ssy-whipped, Brady Bunch version of itself run by a bunch of robbed sissies”.

Everyone in the future wear robes. Other than a nod to globalism, the movie predicted the “gender-blurring” fashion that is happening now. 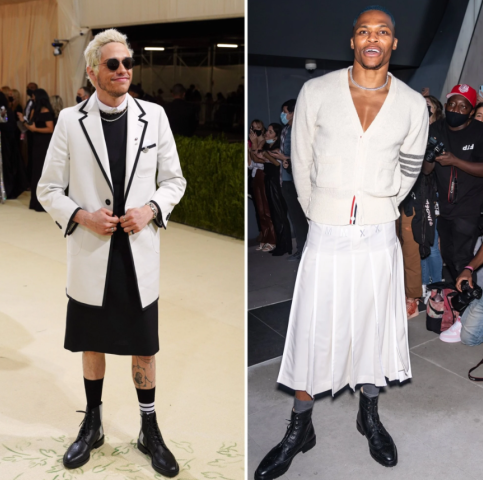 In a world filled with “robbed sissies”, nobody can stop Phoenix from destroying everything. So the police force decides to thaw John Spartan (played by Sylvester Stallone), an old-school police dude who was also cryogenically frozen in 1997 due to accusations of involuntary manslaughter.

When Spartan integrates the police force, he’s immediately at odds with the oppressive ways of this new society.

There are machines everywhere listening to what people say. When someone says something bad, the machine emits a buzzing noise and says: “You are fined one credit for a violation of the verbal morality statute”. In this scene, Spartan keeps insulting the machine so he can use the fines to wipe his butt with them.

What better way of representing today’s anti-free speech climate, where any violation of the “morality code” dictated by the elite results in immediate punishment, censorship, and cancellation?

Spartan also discovers that everyone has a microchip sewn into their skin. Including himself.

The chip is required to accomplish anything in San Angeles, including entering one’s own home. Since money is outmoded, all transactions are done using the chip.

Watching this movie in 2022, it is impossible not to draw parallels with vaccine passports which are, in many places, required to participate in society. Of course, there are efforts to turn these passports into chips.

A recent headline about a Swedish company developing a microchip vaccine passport.

When Spartan learns about the chip, he says “this fascist crap makes me puke”. Yup, back in the 90s, people could recognize fascist crap when they saw it. As Spartan discovers this “brave new world”, he also learns about how it all came to be. And it’s eerily similar to what happened in real life.

Order Out of Chaos

In 2032, the city of San Angeles (born from the merger of Santa Barbara, Los Angeles, and San Diego) is under the control of Dr. Cocteau, a tyrannical figure who uses science and technology to create a “perfect” society. In Dr. Cocteau’s city, everything that is bad for you is illegal: Alcohol, caffeine, contact sports, meat, bad language, chocolate, gasoline, non-educational toys, and anything spicy. Abortion is also illegal but so is pregnancy … unless you have a license.

A recurring joke in the movie is the contactless “handshake”.

With that being said, he’s a recent headline from real life.

I’m not saying that Dr. Fauci is Dr. Cocteau from Demolition Man, but let’s say that the similarities are stunning. 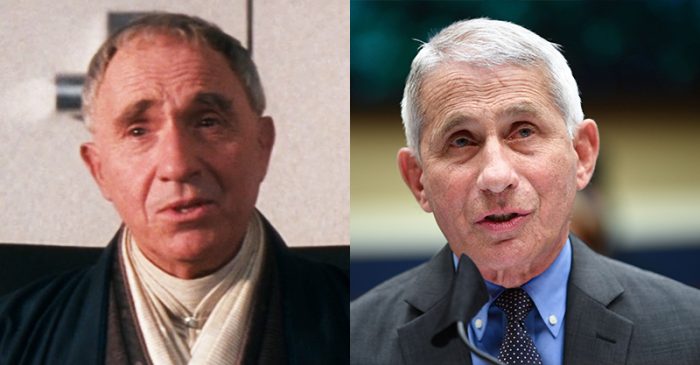 In this contactless society, the best way to run meetings is through … Zoom calls.

One of the many accurate technological predictions made in Demolition Man.

At one point, John Spartan discovers the full extent of the no-touching policy.

Spartan’s co-worker Lenina Huxley (named after Aldous Huxley, author of Brave New World) asks him to have sex. When he agrees, she hands him a “vir-sex’ device.

When one watches this scene in 2022, one automatically thinks: Those are VR devices. However, none of these things really existed in 1993. At that time, the height of technology was the Super Nintendo.

Spartan hates this device and wants to do it with Huxley the good old-fashioned way. Huxley refuses and explains to him how a series of epidemics and “variants” lead to the banning of “fluid transfer”.

“The rampant exchange of bodily fluids was one of the major reasons for the downfall of society. After AIDS, there was NRS. After NRS, there was UBT. One of the first things Dr. Coteau did was to outlaw and behaviorally engineer all fluid transfer out of societally acceptable behavior. Not even mouth transfer is condoned. (…)

With that being said, here’s a recent headline from Canada’s “top doctor”.

This is not satire.

Huxley also explains how procreation is regulated in 2032.

Procreation? We go to a lab. Fluids are purified, screened, and transferred by medical personnel only. It is the only legal way.”

With that being said, here’s a very recent headline.

Demolition Man also satirizes popular culture being destroyed by political correctness. Indeed, people in 2032 are so sensitive and infantilized that the only music they listen to are “mini-tunes” – short commercial jingles with absolutely no content. In one scene, Spartan’s co-workers sing the Armour Hot Dogs jingle in the car:

Upon watching this scene, I came to a mind-blowing realization: If the Armour Hot Dog jingle played today on the radio, some people would actually be offended by it. They would request its censorship. In other words, this satirical example of the least offensive song possible would still be considered offensive today. We’re beyond satire.

While Spartan hates every aspect of this new society, he discovers that some people are rebelling against it.

Living underneath San Angeles is a group of dirty rebels who oppose Dr. Cocteau’s rule.

At one point, the leader of the rebels tells Spartan:

“See, according to Cocteau’s plan, I’m the enemy. Because I like to think. I like to read. I’m into freedom of speech and freedom of choice”.

Could this be more relevant today? Of course, Cocteau hates these people. He calls them:

“Outcasts and deserters who choose to live beneath us in sewers and abandoned tunnels. They’re a constant irritation to our harmony”.

We eventually discover that Cocteau programmed Simon Phoenix to kill the rebels and stop their revolution. In other words, Dr. Cocteau used Phoenix as a mind-controlled patsy to take care of his dirty work. This happens in real life.

When Dr. Cocteau exposes the full extent of his plan, Simon Phoenix becomes disgusted and says:

“Look, you can’t take away people’s rights to be *ssholes.”

So, even the “bad guy” of the movie values freedom.

Then, Jesse Damn Ventura shoots Dr. Cocteau and rids the world of his awfulness.

Eventually, John Spartan destroys Simon Phoenix and his gang of thugs. Then, in a new world, free from Dr. Cocteau’s rule, people ask Spartan what they should do next. As usual, Sylvester Stallone imparts the world with precious words of wisdom. He tells the brainwashed citizens to “get a little dirtier”. Then, he tells the rebels to “get a lot cleaner”. Then, he says:

“Somewhere in the middle, I don’t know, you’ll figure it out.”

And he’s right. Extreme oppression leads to extreme resistance. This is happening now. I say we stop everything, go back to how we were in the 1990s, and try again.

The movie ends with a big, fat exchange of fluids. Sanity is back.

The movie Demolition Man is probably the most predictive sci-fi movie I’ve ever seen. It also predicted self-driving electric cars that look exactly like Teslas, Arnold Schwarzenegger becoming a politician, people conversing with Alexa/Siri-type machines, the widespread use of biometrics and artificial intelligence, the disappearance of small restaurants to be replaced by monopolistic chains, and much more. All of this was pure science fiction in 1993. But it could happen if society took a specific direction. And it did.

The future depicted in Demolition Man was meant as satire. It was basically a warning saying: “Here’s how things could end up if we’re not careful”. Today, which is ten years from the movie’s “future”, we can easily say that the satire has become reality. The jokes of the film have become our annoying reality.

The COVID pandemic allowed unelected “doctors” to rule every aspect of our lives and dictate oppressive policies. QR codes and microchips are creeping into our everyday lives. Opinions and attitudes that do not fit the current orthodoxy are immediately censored and punished. General manliness and womanliness are frowned upon and deemed undesirable.

While we are being conditioned to think that all of this is normal, IT IS NOT. Demolition Man is like a distant voice from the past telling us:

This fascist crap makes me puke!