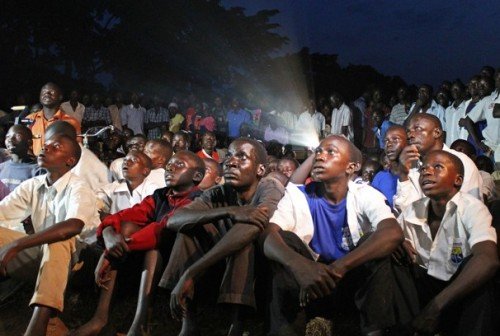 The screening of KONY 2012 in Northern Uganda was not met with the appraise it got in America. Quite to the contrary, Ugandans were appalled by the “Make Him Famous” campaign that gave Joseph Kony superstar status. I perfectly understand what they mean. The definition of “famous” is having a widespread reputation, usually of a favorable nature. Synonyms of “famous” are famed, notable, illustrious, celebrated, eminent, distinguished. One does not need to be a specialist in neurolinguistics to understand that the “Make Him Famous” campaign might be perceived by the brain in a perverse way. And the Ugandans are not fans of the merchandising. Also very understandable.

Facing this criticism, representatives of Invisible Children stated that KONY 2012 “was targeted to educate a younger Western audience”. In other words, the video was tailor-made to indoctrinate young gullible American and European kids (as we’ve seen in the article KONY 2012: State Propaganda for a New Generation) and no one else. Good comeback. Here’s an article from The Guardian about the screening.

It had been viewed more than 77m times around the world, but not by those who know the Joseph Kony best: his victims in northern Uganda.

That changed on Tuesday night when thousands flocked to watch Kony 2012, the video made by a US charity urging a grassroots campaign against the fugitive warlord that has gone viral.

The film was projected on to an ersatz cinema screen fashioned from a white sheet, held up by metal poles, in a town park. The reaction? Puzzlement, then anger, which boiled over into scuffles and stone-throwing that sent organisers fleeing for cover.

There was particular criticism of the Stop Kony campaign’s use of merchandise, such as bracelets and T-shirts, which victims said they find offensive.

“People were very angry about the film,” said Victor Ochen, director of a local charity, the African Youth Initiative Network (Ayinet), which arranged the screening. “They were all saying, ‘This is not about us, it does not reflect our lives’.”

Ochen said he had wanted to provide an opportunity for victims to see the film made by the charity Invisible Children, mindful that less than 2% of Ugandans have internet access.

The video, posted on YouTube on 5 March and narrated by one of Invisible Children’s founders, Jason Russell, had drawn the support of celebrities including George Clooney and Angelina Jolie, but provoked criticism for oversimplifying the conflict and not making clear that Kony was driven out of Uganda several years ago.

Before sunset on Tuesday two metal rods were hammered into dry dirt and grass and a white sheet hoisted to create an open-air cinema in the mayor’s gardens in the centre of Lira, 220 miles north of the capital, Kampala.

Word about the “premiere” spread on local radio, drawing a crowd on foot and bicycle that grew over several hours and was estimated at more than 35,000 by Ochen, though others put it at more like 5,000.

The expectant, excited spectators, many of whom cannot speak English, included victims who have been left scarred and maimed by Kony’s atrocities.

But Ochen, whose own father and brother were abducted by Kony’s Lord’s Resistance Army (LRA), said on Wednesday: “Reacting to the film, there was a strong sense that the video was definitely not produced for an African audience, and that it was not sensitive enough to the victims.

“It was very hurtful for them and their families to see posters, bracelets and buttons, all looking like slick campaign ads of the person most responsible for their shattered lives. One young man who lost four brothers and one of his arms said afterwards: ‘How can anybody expect me to wear a T-shirt with Kony’s name on it?'”

He added: “For all the victims, the attempt to make Kony famous so as to prop up public support for his apprehension is laudable but the way this goal is pursued in the video is inappropriate and ignores their feelings.

“That fame is not what Kony deserves for causing so much suffering was one overwhelming reaction. People were asking: Why give such criminals celebrity status? Why not prioritise addressing the plight of the victims whose sufferings are visible?”

The screening ended amid jeers and scuffles, with some angry viewers throwing stones. Ayinet has decided to suspend planning screenings of Kony 2012 in other parts of northern Uganda indefinitely due to the hostile reaction.

Emmy Okello, a radio journalist in Lira, said: “I cannot understand the intention of this video. It is difficult to account to us if you are not including local people. What has angered people is that the video is about a white person, not about the victims. All of them came here hoping to see video that tells their story.”

Okello Jifony, who was forced to fight under Kony for 18 months, told Reuters: “We expected serious action, Americans fighting Kony like in a real movie.”

He added: “Why didn’t they use the real victims in this film?”

On Wednesday there were calls in Uganda to ban the campaign’s “Stop Kony” T-shirts from entering the country. One caller to a radio phone-in said: “The government must protect us victims not only from Kony but also from things that hurt us like these T-shirts.

“And as people of northern Uganda we will not accept anyone to cross Karuma (a bridge across the Nile that connects north to central Uganda) with that T-shirt.”

Al-Jazeera reporter Malcolm Webb blogged: “One woman I spoke to made the comparison of selling Osama Bin Laden paraphernalia post 9/11 – likely to be highly offensive to many Americans, how ever well intentioned the campaign behind it.”

Kony, a self-proclaimed mystic, is wanted by the international criminal court for crimes against humanity.

On Tuesday a Congolese general said Kony and other LRA leaders have been chased out of the Democratic Republic of Congo to the neighbouring Central African Republic and no longer pose a threat in his country.

General Jean Claude Kifwa, in charge of fighting the LRA in Congo, told journalists: “We have reduced the capacity of the LRA. For us it’s no longer an issue of defence. It’s a public order issue.”

The comment follows a complaint by nearby Uganda that Congo was obstructing its US-backed hunt for Kony.
– Source: The Guardian

The Occult Symbolism of the Vatican’s 2020 Nativity Scene