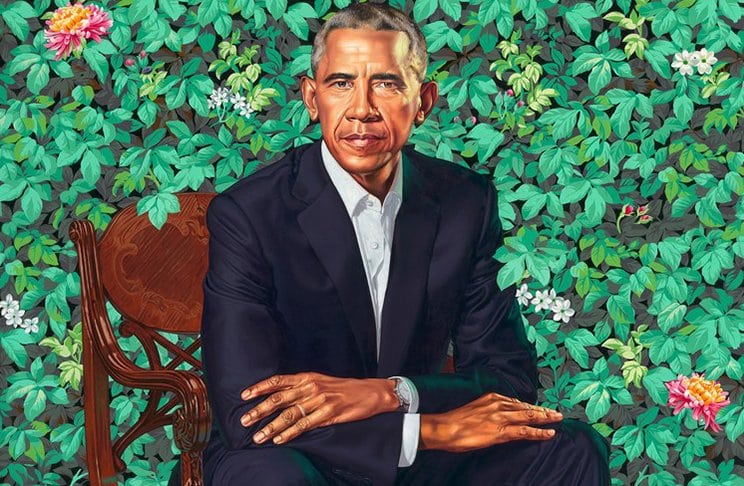 The official portrait of Barack Obama contains some strange details. The creator of the painting, Kehinde Wiley, has a bizarre story.

On February 12th, the official portraits of Barack and Michelle Obama were unveiled at the famed Smithsonian National Portrait Gallery, the “nation’s only complete collection of presidential portraits outside the White House”. This prestigious art exhibit contains iconic paintings such as “The Lansdowne Portrait” of George Washington. It also contains some more controversial entries such as Bill Clinton’s portrait which, according to its painter, features the shadow of the infamous stained dress.

“If you look at the left-hand side of it there’s a mantel in the Oval Office and I put a shadow coming into the painting and it does two things. It actually literally represents a shadow from a blue dress that I had on a mannequin, that I had there while I was painting it, but not when he was there. It is also a bit of a metaphor in that it represents a shadow on the office he held, or on him.

And so the Clintons hate the portrait. They want it removed from the National Portrait Gallery. They’re putting a lot of pressure on them.
– Philly News, Painter says he included Monica Lewinsky’s dress in Bill Clinton portrait

Barack Obama’s portrait, with its bright colors and lush green background, will undoubtedly stand out from the more conventional pieces on display in the president’s hall. However, a closer look at the painting and its painter’s past reveals a bizarre subtext.

Wiley is mostly known for his colorful depictions of young black males over classical backdrops inspired from masterworks.

Wiley describes his approach as “interrogating the notion of the master painter, at once critical and complicit.” His figurative paintings “quote historical sources and position young black men within that field of power”. In this manner, his paintings fuse history and style in a unique and contemporary manner. His art has been described as having homoerotic qualities. Wiley has used a sperm motif as symbolic of masculinity and gender.
– Wikipedia, Kehinde Wiley

In a 2015 interview with CBS News, Wiley stated that he often added sperm cells inside paintings to “take masculinity and all of its bravado down to its most essential component”. 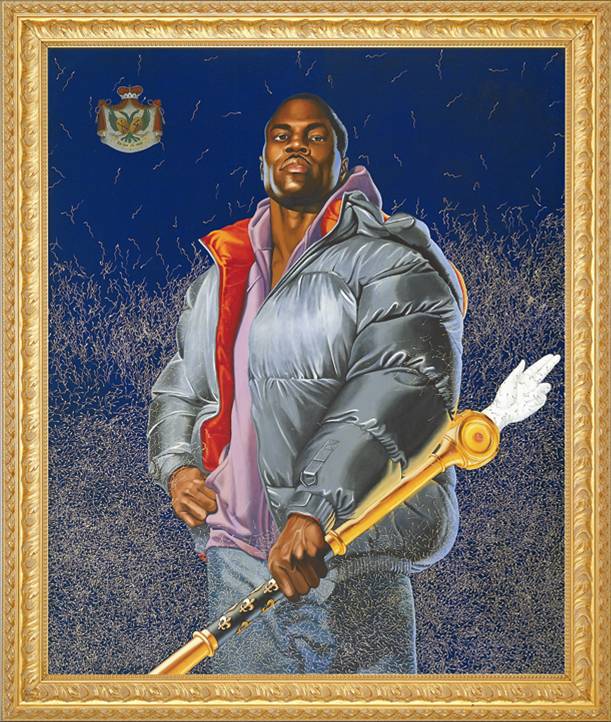 His Alexander the Great variation features a background full of sperm cells.

Small sperm cells can be found in the background of this Napoleon-inspired painting. 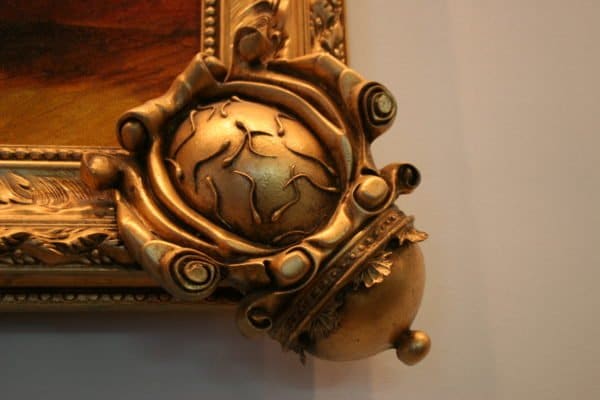 The frame of the above painting contains sperm cells as well.

While Wiley’s work has been embraced by the entertainment industry, his work also drew its share of criticism. The fact that Wiley often recruits his models from the streets of New York to portray them in a lavish, sexually-charged fashion has been deemed “exploitative”.

A 2015 Village Voice article entitled What to Make of Kehinde Wiley’s Pervy Brooklyn Museum Retrospective? goes even further. It accuses him of “predatory behavior”.

But look closer at the 50-some objects — painting, sculpture, stained glass — in “Kehinde Wiley: A New Republic,” and you’ll see predatory behavior dressed up as art-historical affirmative action. Wiley’s targets are young people of color who in these pictures are gussied up in the trappings of art history or Givenchy. Judging from Wiley’s market and institutional success — in his fifteen-year career, this is his second solo at the Brooklyn Museum — Wiley has proven himself a canny operator seducing an art public cowed by political correctness and willing to gloss over the more lurid implications of the 38-year-old artist’s production.

Down, his series of billboard-size canvases of lounging odalisques, finds the artist’s male models with their underwear pulled down to reveal a few inches of abdomen and their lips moist and open in the manner of a classical Venus.

And then there is Wiley’s casting-couch method. In the early 2000s, after he graduated from Yale, Wiley did a residency at the Studio Museum and began inviting men he met on the streets into his studio to pose. “When I’m approaching these guys, there’s a presupposed engagement,” Wiley said in the 2008 Art Newspaperinterview. “I don’t ask people what their sexualities are, but there’s a sense in which male beauty is being negotiated.”

What Wiley and his subjects do behind the scenes may be none of our business, but his paintings kiss and tell. Saint Andrew grinds his crotch against a wooden cross, and in case we don’t quite get it, Wiley has painted free-floating spermatozoa across the canvas. The same goes for the bear of a fellow in Napoleon Leading the Army Over the Alps, which could be subtitled “(Through a Light Ejaculate Mist).” And if the painted tadpoles aren’t sufficiently suggestive, several of the gilded frames contain sperm reliefs of their own. (Talk about painting outside the lines.)

In what world is a Yale-minted artist who lures young men into his studio with the promise of power and glamour not predatory? These aren’t portraits. They’re type — to the point where the majority of his titles reflect only the identity of the original sitter; his models remain anonymous.
– Jessica Dawson

The article ends with a rather ominous sentence.

Having discovered the art world’s weakness, Wiley has painted himself as untouchable.

Later in his career, Wiley also painted women. And there’s controversy surrounding some of these paintings as well. 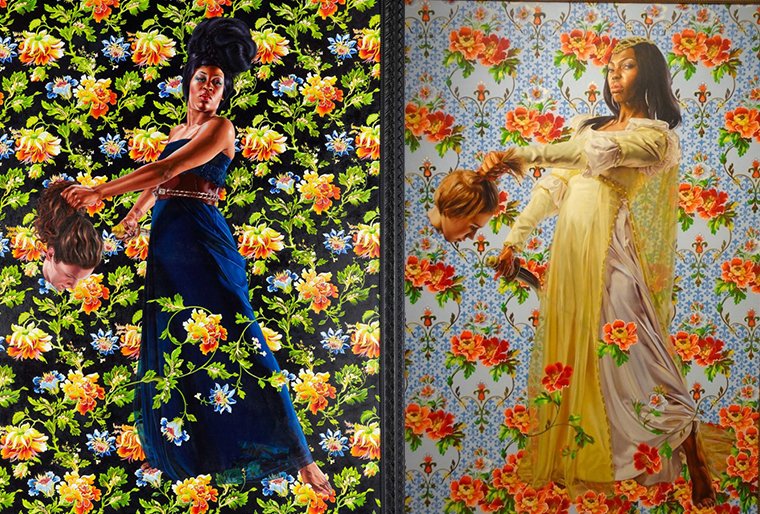 These paintings were inspired Judith beheading Holofernes – a recurrent theme in art history. Originating from the deuterocanonical Book of Judith, the story says that Judith, a beautiful widow, enters the tent of Holofernes, an Assyrian general, and beheads him. In Wiley’s interpretation, the Assyrian male is replaced by a white woman. No explanation was given for this notable substitution.

Despite these controversies, Obama specifically selected this painter to produce his official portrait. 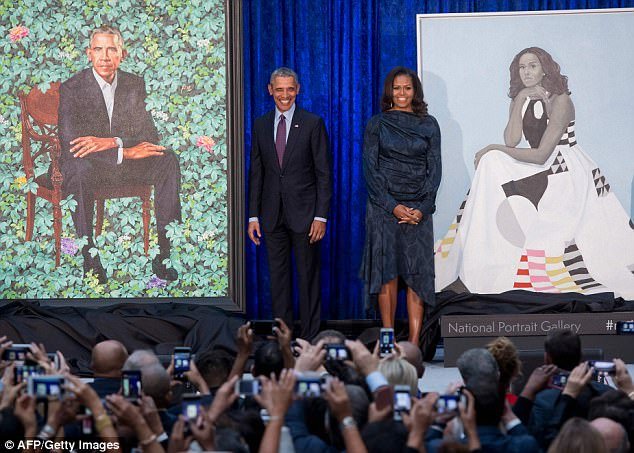 The Obamas at the unveiling of their portraits at the NPG.

While Michelle’s portrait drew criticism because “the face doesn’t look like her”, it is the former President’s portrait that raised the most eyebrows.

The painting was unveiled on February 12, 2018. It depicts Obama sitting in a chair seemingly floating among foliage. The foliage is described by the author as “chrysanthemums (the official flower of Chicago), jasmine (symbolic of Hawaii where the president spent most of his childhood) and African blue lilies(alluding to the president’s late Kenyan father). ”Reacting to the unveiling of his portrait Obama said: “How about that? That’s pretty sharp,” The Washington Post described the painting as “not what you’d expect and that’s why it’s great”. The painting received mixed reactions on social media.

Considering Wiley’s propensity for adding hidden little symbols in his paintings, some took a closer look at Obama’s portrait … and found some weird stuff. First, is there a sperm cell on Obama’s face? 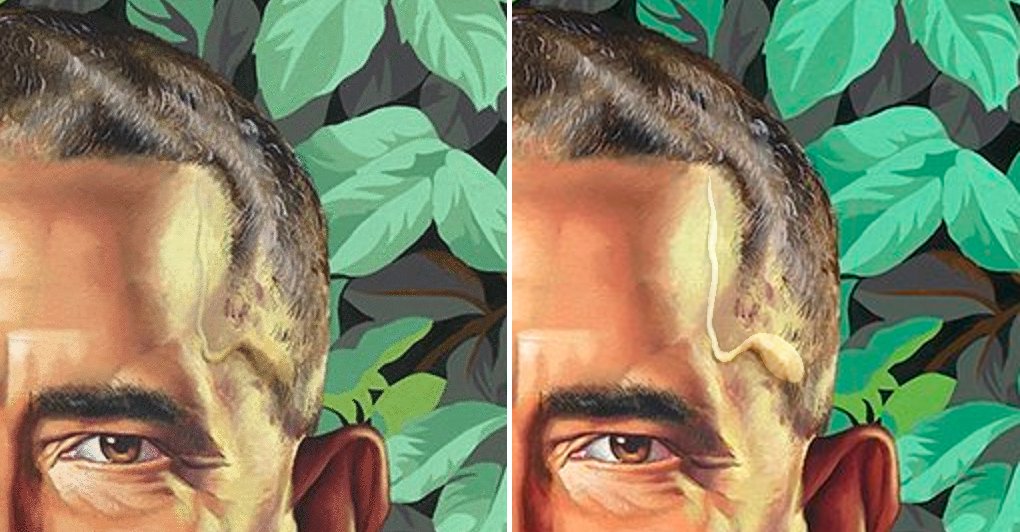 Some observed that the big, bulging vein on Obama’s forehead oddly looks like a sperm cell.

Others observed that Obama appears to have a sixth finger. 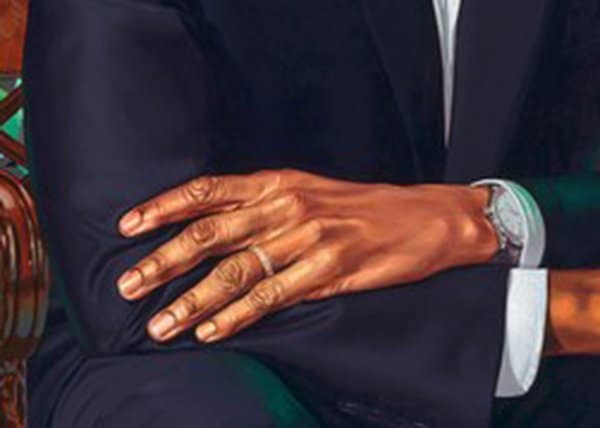 Knowing that the thumb points towards the body, there appears to be a sixth finger tucked in there.

Considering past controversies, the selection of Kehinde Wiley to paint a presidential portrait seems like an odd choice. However, several facts played in his favor: He is a favorite of the Hollywood elite and he plays into the race wars agenda that has been going on for years. Also, he might have embedded a sperm cell into Obama’s face. Obama’s response: “How about that? That’s pretty sharp”. Wiley truly painted himself as untouchable.