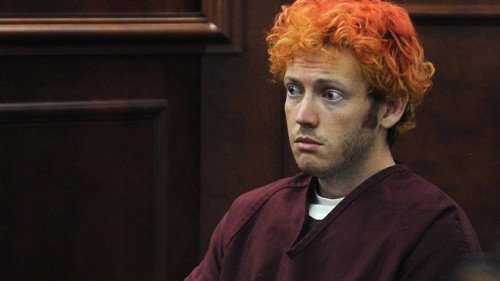 In the article entitled Was the “Batman Shooting” a Ritualistic Murder Carried Out by Mind Controlled Patsy?, I explained why James Holmes might have been a product of MK-Ultra. Now an inmate named Steve Unruh claims that Holmes confessed to him that he was “programmed” to performs the killings.

In a not-very-publicized article from the Denver Westword, Unruh indeed claims that Holmes told him that he was programmed to kill by an “evil therapist” – a very simple term describing what might have been his trauma-based mind control handler. He also reportedly added that “he felt like he was in a video game” during the shooting (which is somewhat how one feels when an alter persona is triggered) , that “he wasn’t on his meds” and “nobody would help him.”

Unruh added that “When he got out to his car, he wasn’t programmed no more”, meaning that he probably reverted to his core persona after the murders. Holmes has mentioned NLP (neuro-linguistic programming), a technique often by Monarch programming handlers.

“If one studies NLP, one will find that NLP books such as Basic Techniques Book II by Clifford Wright, teach people how to create dissociative states which are alternate personalities, and that they teach people how to develop different states of mind, and pseudo multiple personalities. It is difficult to express all the different cross-overs that NLP has with Monarch Programming, but at different times the concepts of NLP certainly would be helpful to the handlers.”
– Fritz Springmeier, The Illuminati Formula Used to Create an Undetectable Total Mind Controlled Slave

Although most of the article in the Denver Westword is dedicated to discrediting Steve Unruh, those who know a little about Monarch programming might realize that his story might have some truth to it.

Steven Unruh is having a hard time convincing anyone that he spent hours talking to Aurora theater shootings suspect James Holmes shortly after his arrest last July. Jail officials say there’s no way that Unruh could have had that kind of access. Yet certain elements of the story — which includes a description that resembles the headbanging routine that sent Holmes to the hospital last week — have been attracting attention from law enforcement and even families of the shooting victims.

“They’re going to try to discredit my story,” Unruh told Westword in a recent interview at the jail. “But I was able to have a four-hour talk with him. I talked him out of suicide.”

There are plenty of reasons to be skeptical of the tale presented by Unruh, a 38-year-old inmate with a long history of drug and theft charges. To begin with, his account of what Holmes supposedly told him is as bizarre as a William S. Burroughs fever dream. Also, Unruh just got out of prison last January after serving six years for methamphetamine and credit-card fraud convictions, and he says he’s been diagnosed as having a bipolar condition.

“It’s always been meth with me,” he says. “If I drink a beer or something, I’ve got the voices in my head that drive me to do more drugs. I’m really weak-minded.”

He’s going public with his account of an encounter with Holmes, he says, only after first trying to interest the Arapahoe County District Attorney’s Office in his story. He’s currently facing habitual criminal charges and had hoped to deal his way into mental health treatment rather than a twelve-year prison sentence. Although an investigator visited him, “the DA hasn’t been working with me,” he sighs.

What Unruh can prove is that he was booked into the Arapahoe County Sheriff’s Office Detention Facility on drug and theft charges at 6:44 p.m. on July 19 — just hours before the attack in Aurora at a midnight showing of The Dark Knight Risesthat left twelve dead and dozens wounded. Unruh says he was still in the booking area when officers brought in Holmes, whose head was initially covered with a hood. Although Holmes was put into a cell by himself, Unruh says inmates in the area are able to communicate by shouting through a small gap in the cell doors, which move back and forth on rails.

“I didn’t know who he was,” Unruh explains. “I could hear some black dudes yelling from the other side, ‘You’re a piece of shit! Kill yourself!’ I had been in prison before, so they said, ‘Tell this dude he’s not going to be all high and mighty on the prison yard.'”

Unruh says he began talking to Holmes, explaining how poorly child killers are received in prison. Jail staff quickly covered the window in Holmes’ cell door with a tarp, but Unruh says he heard him pounding on the wall with his fists — and then running, slamming his body and his head into the wall. (Unruh described this action in an interview that took place several days before Holmes reportedly engaged in similar headbanging last week.)

“It went on for ten minutes before I couldn’t handle it any more,” Unruh says. “I told him, ‘Don’t be doing that. You need to repent to the people for what happened.’ He asked me to do an apology letter for the kids.”

Captain Vince Sauter of the Arapahoe County Sheriff’s Office says that both the physical layout of the booking area and staff’s monitoring of the area would have prevented the kind of dialogue Unruh claims. “Even if they were in booking at the same time, they couldn’t shout from one cell to another like that,” he says. “For someone to say they were communicating with this person — it can’t happen.”

Lieutenant J.D. Knight, who directly supervises booking operations, agrees. “It would be virtually impossible for Mr. Unruh to have any of the communications he has stated,” he says.

But Unruh insists the sporadic conversation continued even after Holmes was moved to another cell in the area. He says that Holmes told him “he felt like he was in a video game” during the shooting, that “he wasn’t on his meds” and “nobody would help him.” He says Holmes also mentioned NLP — presumably, neuro-linguistic programming, a much-scorned and outmoded approach to psychotherapy — and claimed to have been “programmed” to kill by an evil therapist.

“When he got out to his car, he wasn’t programmed no more,” Unruh says. “It sounded kind of crazy. He was trying to run it by me, basically.”

Unruh has a phone number that he says Holmes asked him to call. (The number connects to the cell phone of a bereavement counselor, who says she has no acquaintance with Holmes or Unruh.) He has a form that indicates James Holmes tried to send him a letter, but it was rejected by jail authorities. (Knight says he has no record of any letter sent by Holmes to Unruh, intercepted or otherwise.) He claims to have received messages from Holmes via other inmates since that night, but he admits he doesn’t know if the sender was actually Holmes.

Still, Unruh’s story seems to have drawn interest in one unlikely quarter. He says Holmes told him he “walked up and down the aisles” of the theater three times before he opened fire, and that detail, if true, might have some bearing on the pending litigation by victims’ families against the theater chain. Unruh has paperwork indicating that he’s been in communication with at least one family member on that point.

Unruh’s story may well prove to be nonsense. Whether it’s his nonsense or Holmes’s own, the lack of answers in the Aurora tragedy has some people looking for whatever answers can be found.

Related Topics:batman shooting
Up Next