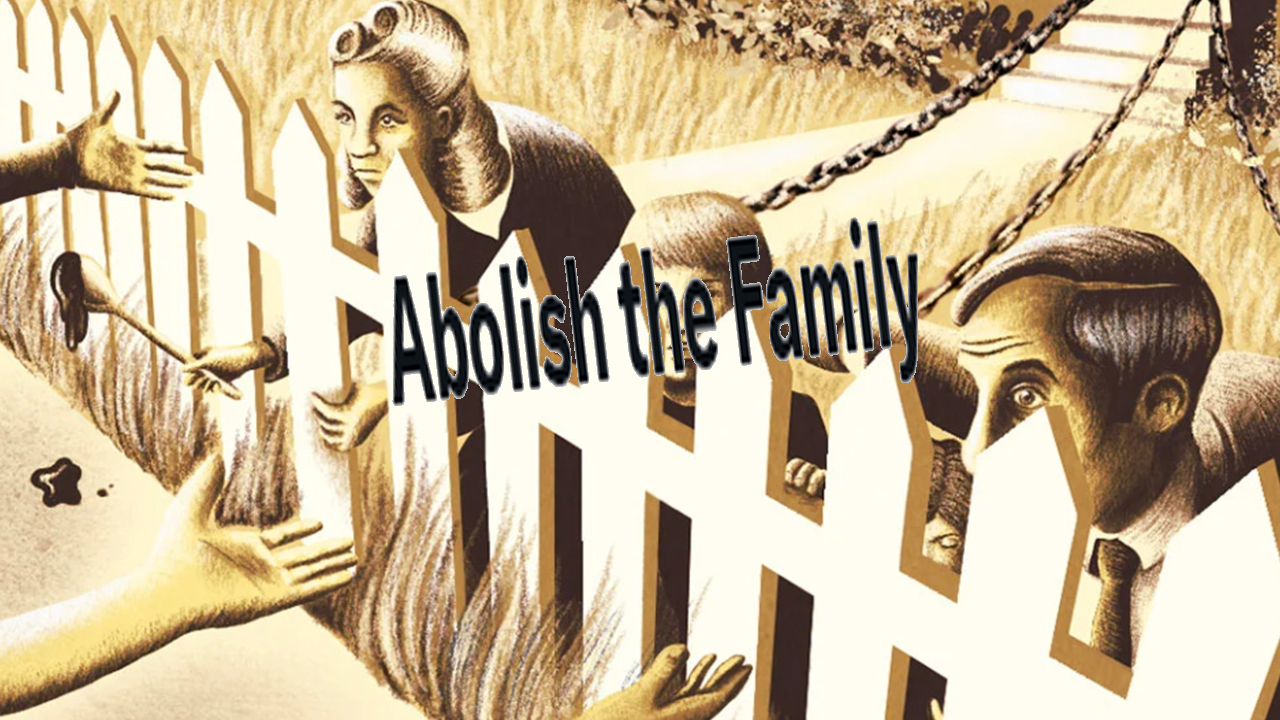 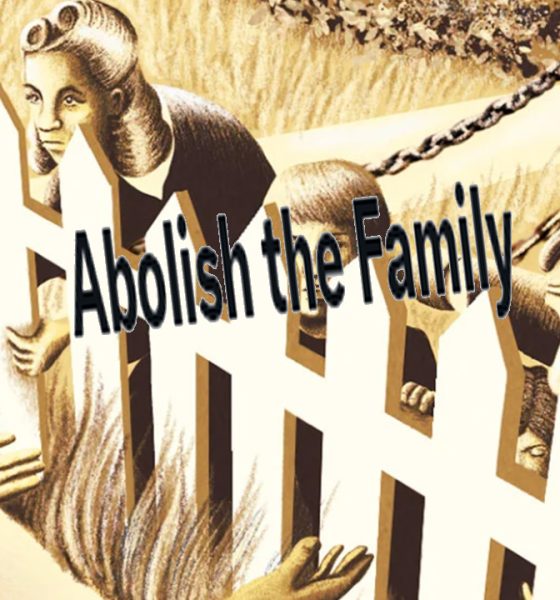 In this new series of articles, we’ll look at some of the most ridiculous headlines found in major publications and expose the insidious agenda behind them.

I have a nasty habit that I am desperately trying to quit: I scroll through news headlines too many times a day. Sometimes I do it without even realizing it. And I have to stop it. Because this mindless activity often ends up souring my mood and raising my blood pressure.

That’s because, in the past years, what we call “the news” morphed into a mutant, deformed monster that’s barely recognizable. There is no more objective information, only articles telling you what to think about information. There are no more journalists, only word monkeys who were solely hired to churn out the “agenda du jour”. And the headlines they come up with are bad. And pathetic. And embarrassing.

Some are so mind-bogglingly awful that I feel they should be preserved and cherished forever. In fact, they should be shown to future generations as examples of the prevailing insanity in 21st-century mass media.

In short, I started collecting insane headlines and I’d like to share them with you. Because behind these insane words hide an even more insane agenda.

Let’s look at some insane headlines that were published by major outlets in the past weeks. 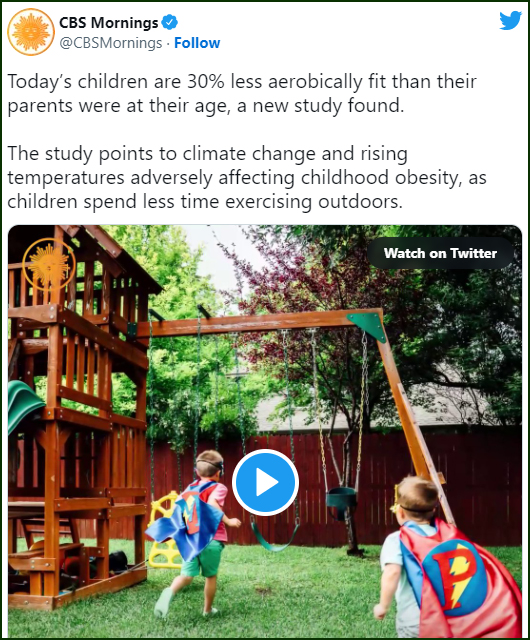 In the past few years, the climate agenda pushed by mass media has taken a bizarre turn. After elevating Greta Thunberg to the status of “climate Saint” (for no reason at all) and blaming every single instance of bad weather on climate change, mass media wants to go even further.

Now, the illustrious journalists at CBS Mornings are telling us that climate change is ATTACKING OUR CHILDREN.

Indeed, using a highly biased “study” (specifically created to serve an agenda), this news blurb states that children are fatter and less active because … of the climate.

Here’s a crazy idea: Children are fatter because most of them are glued to screens several hours a day and eat tons of sugar and processed foods.

But no. Facts are not important. Only agendas. So we must blame climate change for fat kids. Why take personal responsibility for your children when you can blame a vague agenda that can only be resolved with a global government?

Time Has a Seizure 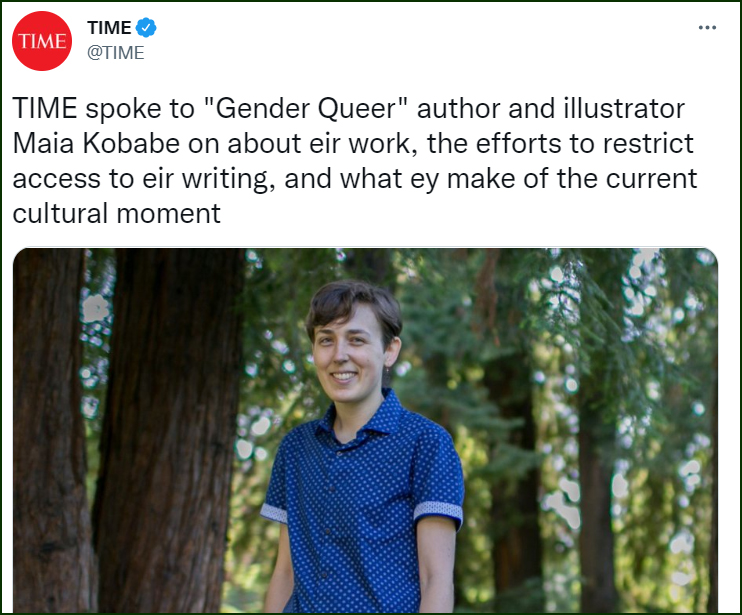 Please read the headline above carefully. Notice weird words such as “eir” and “ey”? No, those are not typos. Those are gender-neutral pronouns that nobody in their right mind ever uses. But Time made it a point to liter its headline with these words.

That’s because the English language is transphobic and needs to be morphed into Orwellian Newspeak. If you’re confused about these words, here’s a simple (and totally not insane) guide to help you. 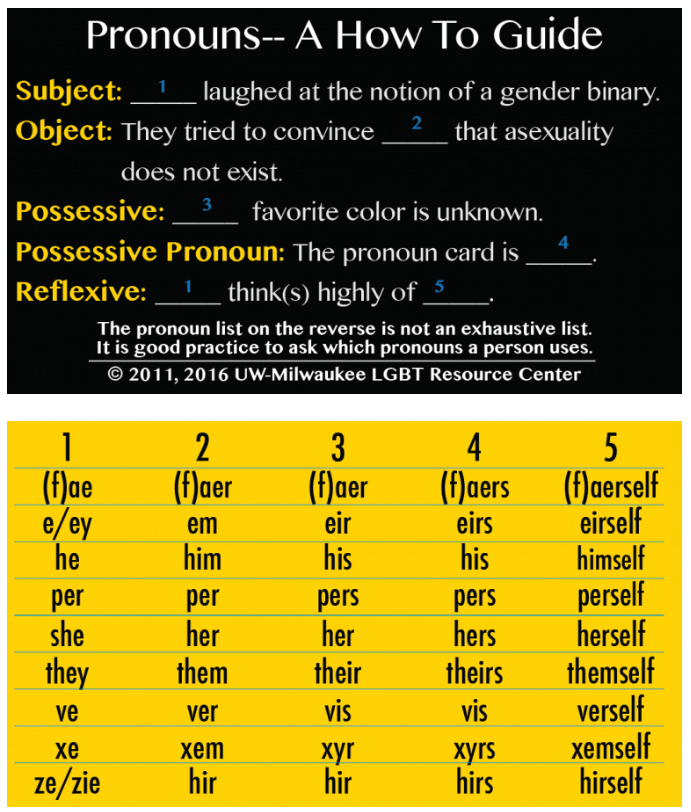 This is not insane. 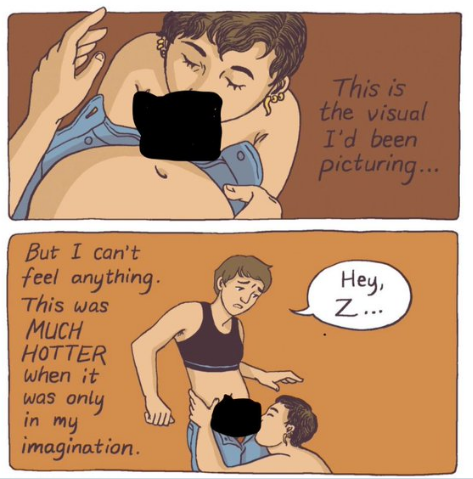 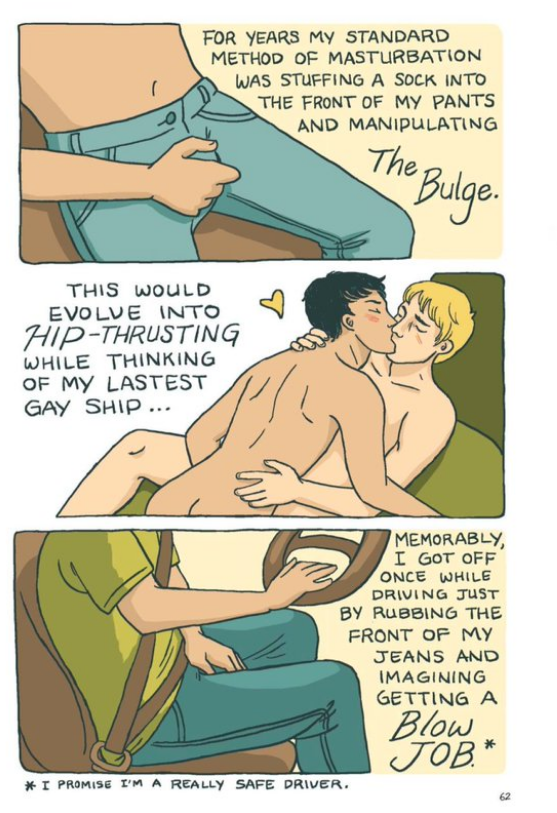 If you’re tempted to say:

“VC you’ve gone too far! Why did you post this filth in your article? I did not want to see this!”

Please take note of this important fact: This book can be found in countless ELEMENTARY SCHOOLS across the country. And Time magazine is promoting it using crazy made-up words. This is the current state of education and mass media. 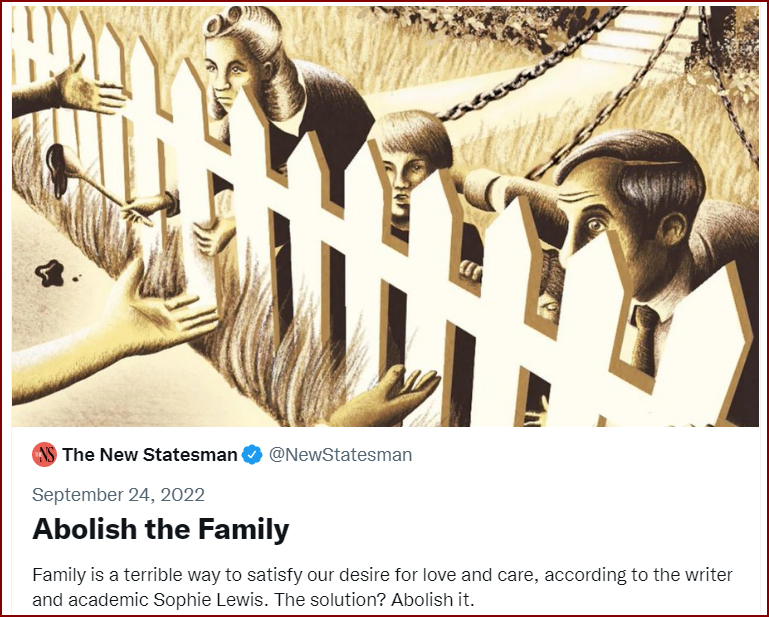 The “prestigious” British publication The New Statesman just came out and said it: Abolish the Family. The elite has been wanting total control of our children for a while and it is now blatantly using mass media to promote it.

The image accompanying this insane headline depicts a miserable family chained to a house. The woman apparently hates feeding her family and the kid is just sick of being with the people who created and gave birth to him.

The subtitle says “family is a terrible way to satisfy our desire for love and care”. Wow. Here’s another amazing argument. 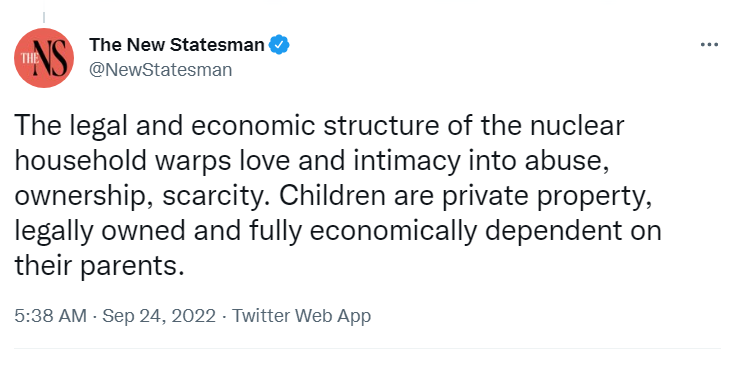 In other words: Children should belong to the state.

The global elite does not like the nuclear family. It is the biggest obstacle in the elite’s quest for total control over individuals. A strong and loving family creates individuals who are happy, healthy, grounded, and more likely to create their own strong and loving family. The elite wants the exact opposite. It wants sad, debased, confused, and heavily medicated individuals that can easily be controlled and manipulated.

I often refer to the 1963 document “Current Communist Goals” (which lists 45 objectives to destroy a nation from within) because it is highly relevant today. Here is one of these objectives.

This is why this article exists. It is indoctrination.

Remember the fraudulent, elite-sponsored, Marxist organization that was ironically called Black Lives Matter? Here’s one of its tenets.

This was found on BLM’s official website. It was then scrubbed when numerous black people called out this insanity.

The anti-family agenda is real. 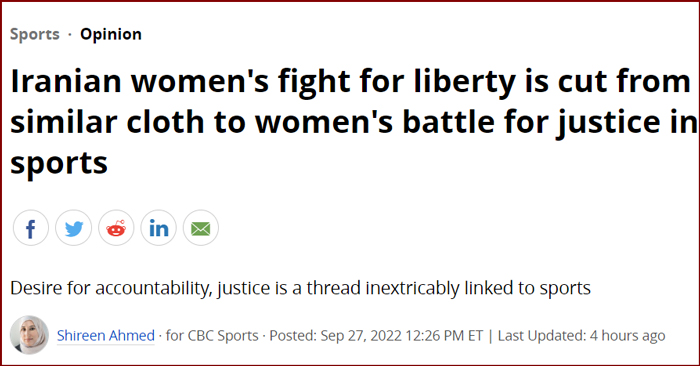 The Canadian Broadcasting Corporation (CBC) used to be a respected news outlet. However, ever since the election of Justin Trudeau, it turned into a ridiculous, highly-biased propaganda outlet of the global elite. It is now a never-ending source of insane headlines.

For instance, last year, I wrote about the highly absurd CBC article that unironically called for the banning of words such as tribe, avocado, brainstorm, and blackmail because they were “hurtful”. It was ridiculous.

And, when it is not trying to control language, the CBC shamelessly uses suffering abroad to push agendas in Canada. In this masterpiece of mental gymnastics, the article above compares women being violently repressed to Canadian athletes who are not paid as many millions of dollars as their male counterparts. Yes, the article compares people being killed by their own government to athletes who are paid in accordance with the revenue they generate.

As is the case with many articles on the CBC website, the comments are scathing. People simply cannot believe that their tax dollars are funding this drivel. 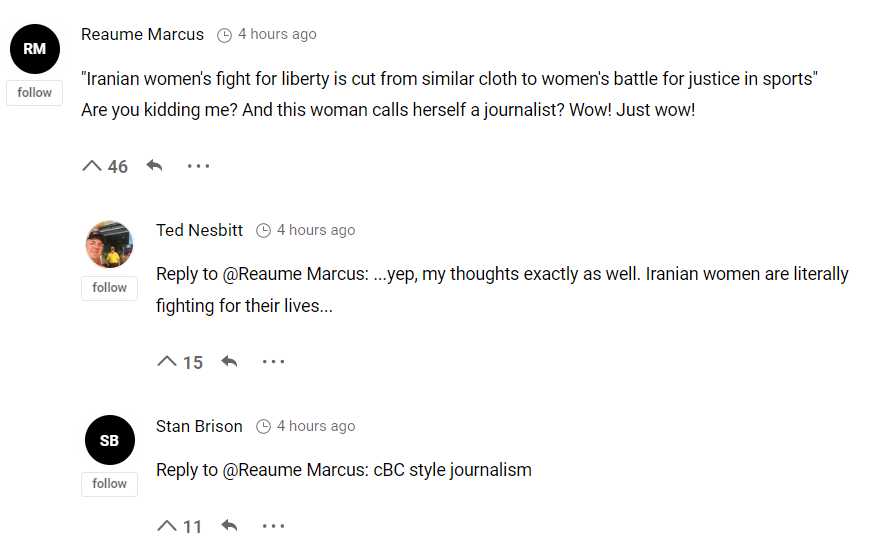 This is the top comment found under the article.

I’ve mentioned many times on this site that the elite is hell-bent on stuffing children with hormone replacements and puberty blockers. And media sources such as Vox are doing their part in promoting this agenda. Despite the fact that its nothing less than child abuse.

As if to confirm this fact, the lead image of the Vox article is creepy and incredibly symbolic.

A toddler faces a triangle with an illuminated capstone.

What is this image supposed to represent? The Illuminati wanting to control your children? Because I don’t see any other rational explanation for this weird image in an article promoting the mutilation of children before they even reach puberty.

Here’s a message to the word monkeys at Vox: Leave the kids alone and mind your business. The family is not abolished yet. 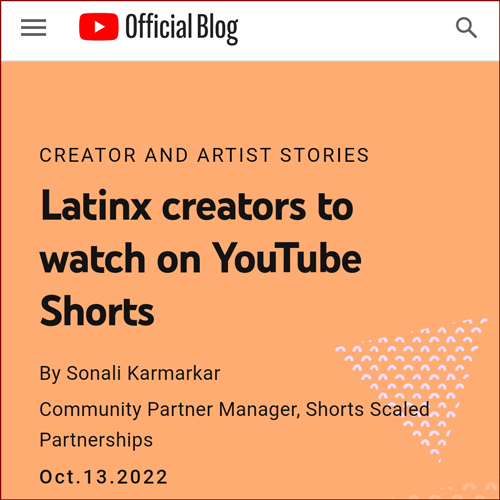 A recent post on YouTube’s official blog apparently had one objective: To annoy people possible by using the word “Latinx” way too many times.

This word, specifically created to cater to the gender-blurring agenda, is an abomination. And Hispanic people absolutely hate it.

A headline that is not insane.

Hispanic people do not use this word. Even worse, they are actually offended by it.

Here’s a fact about Spanish (and several other languages): It is gendered. So, by creating a non-gendered word, the propagandists behind this atrocity negated one of the fundamental characteristics of Hispanic culture. Also, it sounds stupid.

But YouTube found it important to use that word many many times in a blog post. That’s because the war against genders is WAY more important than not pissing off Hispanic people.

I hope you’ve enjoyed the first edition of Insane Headlines of the Month. Feel free to share your comments and suggestions about this new series as I’ll tweak and improve this new format in the coming months.

If you come across an insane headline, please send it over here.