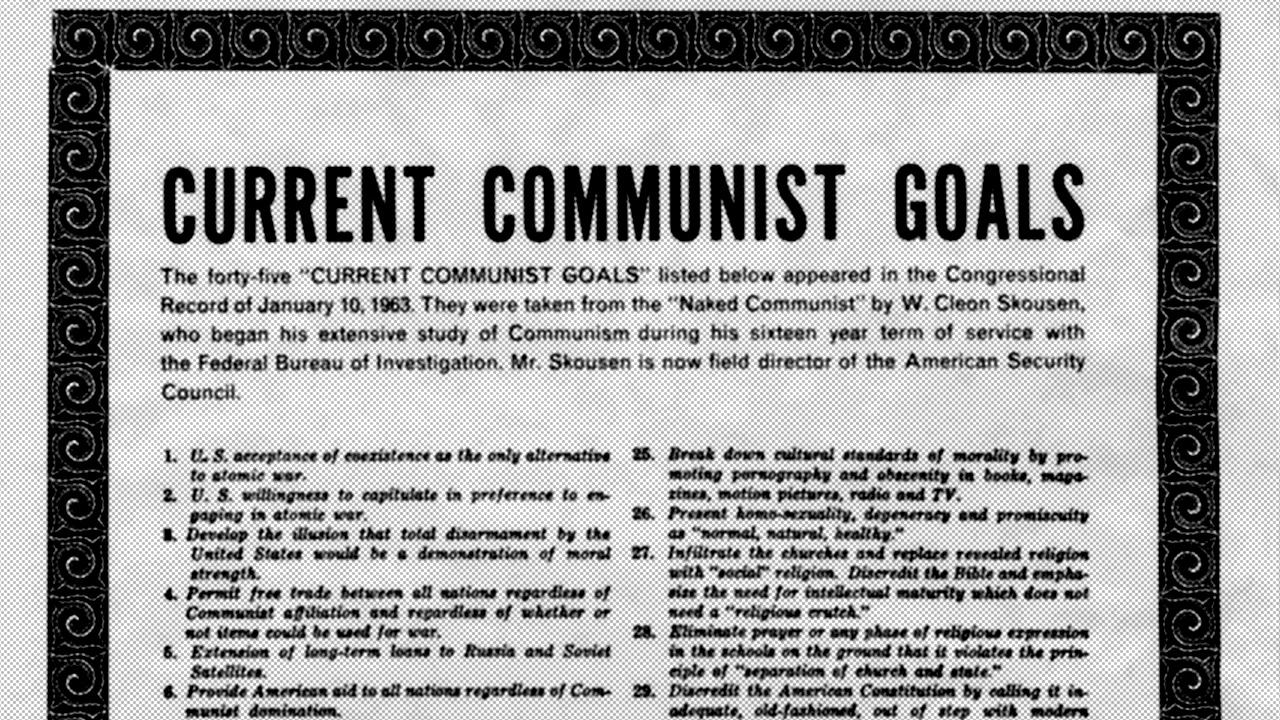 On January 10th, 1963, a document titled Current Communist Goals was presented to the US Congress and was added to the Congressional record “under unanimous consent”. It lists 45 goals pursued by the Communists to overthrow America by infiltrating and corrupting its key institutions.

That list is an excerpt from the 1958 book The Naked Communist written by FBI special agent Cleon Skousen. Reading it today is as mind-blowing as it is troubling. While some points are somewhat outdated – especially those concerning geopolitics – most of them are, today, more relevant than ever.

While going through this list, one cannot help but realize that many goals have been fully achieved several years ago. Others are being aggressively pursued right before our eyes.

This doesn’t mean that the USSR is back from the dead to rule the world with communism. However, it does mean that the global elite is using key components of this list to advance its age-old agenda of a one-world government. Why? Because the key components of this list are timeless, tried-and-true techniques to break down individuals and entire nations.

Here’s the Congressional record in its entirety.

EXTENSION OF REMARKS OF HON. A. S. HERLONG, JR. OF FLORIDA IN THE HOUSE OF REPRESENTATIVES

Mr. HERLONG. Mr. Speaker, Mrs. Patricia Nordman of De Land, Fla., is an ardent and articulate opponent of communism, and until recently published the De Land Courier, which she dedicated to the purpose of alerting the public to the dangers of communism in America.

At Mrs. Nordman’s request, I include in the RECORD, under unanimous consent, the following “Current Communist Goals,” which she identifies as an excerpt from “The Naked Communist,” by Cleon Skousen:

[From “The Naked Communist,” by Cleon Skousen]

1. U.S. acceptance of coexistence as the only alternative to atomic war.

2. U.S. willingness to capitulate in preference to engaging in atomic war.

3. Develop the illusion that total disarmament [by] the United States would be a demonstration of moral strength.

4. Permit free trade between all nations regardless of Communist affiliation and regardless of whether or not items could be used for war.

5. Extension of long-term loans to Russia and Soviet satellites.

6. Provide American aid to all nations regardless of Communist domination.

8. Set up East and West Germany as separate states in spite of Khrushchev’s promise in 1955 to settle the German question by free elections under supervision of the U.N.

9. Prolong the conferences to ban atomic tests because the United States has agreed to suspend tests as long as negotiations are in progress.

10. Allow all Soviet satellites individual representation in the U.N.

11. Promote the U.N. as the only hope for mankind. If its charter is rewritten, demand that it be set up as a one-world government with its own independent armed forces. (Some Communist leaders believe the world can be taken over as easily by the U.N. as by Moscow. Sometimes these two centers compete with each other as they are now doing in the Congo.)

12. Resist any attempt to outlaw the Communist Party.

13. Do away with all loyalty oaths.

15. Capture one or both of the political parties in the United States.

16. Use technical decisions of the courts to weaken basic American institutions by claiming their activities violate civil rights.

17. Get control of the schools. Use them as transmission belts for socialism and current Communist propaganda. Soften the curriculum. Get control of teachers’ associations. Put the party line in textbooks.

18. Gain control of all student newspapers.

19. Use student riots to foment public protests against programs or organizations which are under Communist attack.

22. Continue discrediting American culture by degrading all forms of artistic expression. An American Communist cell was told to “eliminate all good sculpture from parks and buildings, substitute shapeless, awkward and meaningless forms.”

24. Eliminate all laws governing obscenity by calling them “censorship” and a violation of free speech and free press.

25. Break down cultural standards of morality by promoting pornography and obscenity in books, magazines, motion pictures, radio, and TV.

27. Infiltrate the churches and replace revealed religion with “social” religion. Discredit the Bible and emphasize the need for intellectual maturity which does not need a “religious crutch.”

28. Eliminate prayer or any phase of religious expression in the schools on the ground that it violates the principle of “separation of church and state.”

29. Discredit the American Constitution by calling it inadequate, old-fashioned, out of step with modern needs, a hindrance to cooperation between nations on a worldwide basis.

30. Discredit the American Founding Fathers. Present them as selfish aristocrats who had no concern for the “common man.”

31. Belittle all forms of American culture and discourage the teaching of American history on the ground that it was only a minor part of the “big picture.” Give more emphasis to Russian history since the Communists took over.

32. Support any socialist movement to give centralized control over any part of the culture–education, social agencies, welfare programs, mental health clinics, etc.

33. Eliminate all laws or procedures which interfere with the operation of the Communist apparatus.

35. Discredit and eventually dismantle the FBI.

38. Transfer some of the powers of arrest from the police to social agencies. Treat all behavioral problems as psychiatric disorders which no one but psychiatrists can understand [or treat].

39. Dominate the psychiatric profession and use mental health laws as a means of gaining coercive control over those who oppose Communist goals.

42. Create the impression that violence and insurrection are legitimate aspects of the American tradition; that students and special-interest groups should rise up and use [“]united force[“] to solve economic, political or social problems.

43. Overthrow all colonial governments before native populations are ready for self-government.

Throughout the years, countless articles on The Vigilant Citizen have pointed towards several points on this list, especially those concerning the control of arts, entertainment, education, and mass media. One only needs to read news headlines from the past years to realize that several aspects of this list are, right now, a top priority.

For this reason, this list is an important VC Resource that everyone needs to be familiar with it. If one puts aside some of the outdated points that were only applicable during the Cold War, this list presents a timeless blueprint on how to break down individuals and, by extension, entire nations.

Of course, since 1958, this list was most likely updated to become infinitely more sophisticated. Elite think tanks constantly fund advanced studies in human psychology and cognitive processes in order to refine their techniques of mass control.

With that being said, there aren’t too many ways of subverting individuals and nations. The basic principles are all there. The global elite has been hard at work implementing these goals during the last decades and, in the past couple of years, things have gone in full overdrive.

A perfect complement to this list is this important video by ex-KGB agent Yuri Bezmenov who described in 1984 how the USSR infiltrated nations through the four stages of ideological subversion (demoralization, destabilization, crisis, and normalization).

In conclusion, I need to point out that this isn’t a “Left vs Right” issue. Framing objective truths in a “Left vs Right” perspective falls right into their agenda of controlling narratives. Fact: A great number of politicians – from both sides of the political spectrum – are fully sold to this agenda and have been pushing it for years. They are the occult elite. They don’t care about local politics, they operate on a global level, beyond political parties.

This agenda is not only being applied to the United States. It is happening across the world. Right now. More than ever.