In this edition of SPOTM : Justin Bieber in a photoshoot that sums up his career, the Jenners being industry pawns and some highly symbolic magazine covers. 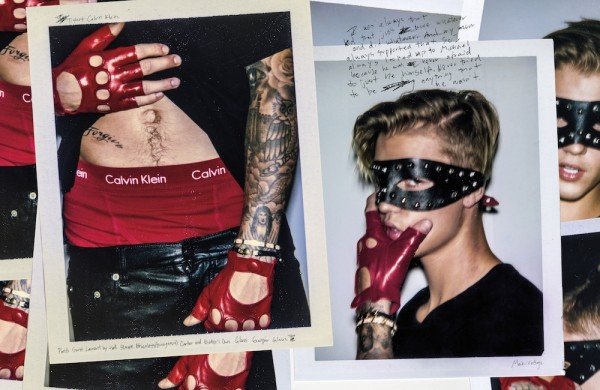 This Justin Bieber photoshoot for Interview magazine could be described as “edgy” but it mostly confirms the status of Bieber as a male Beta Slave. In this pic, Bieber looks like some kind of boy-toy wearing a S&M-style mask. The hand written quote above his head is about Michael Jackson – who also happens to be artist who became a slave to the industry at a very young age. 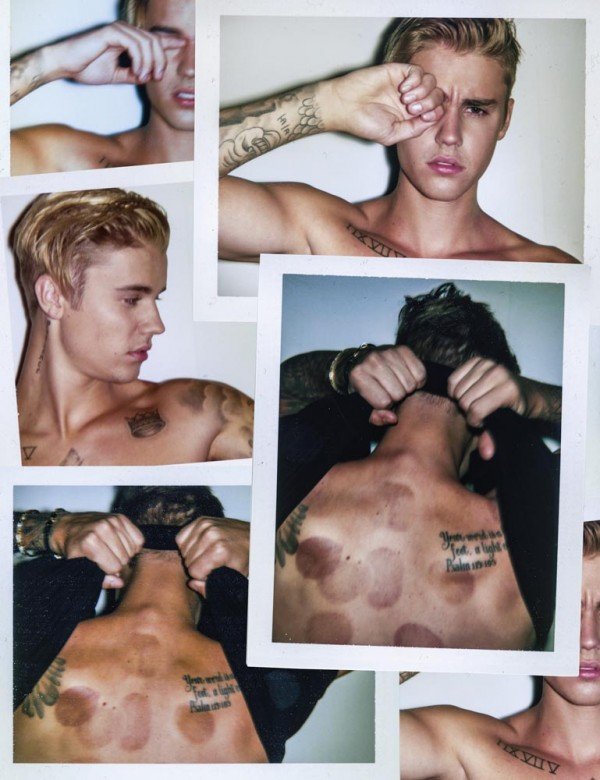 Bieber hides one-eye, confirming that photoshoot is about him being an Illuminati pawn. In the lower photos Bieber shows a bunch of bruises on his back, which appear to be the result of cupping. 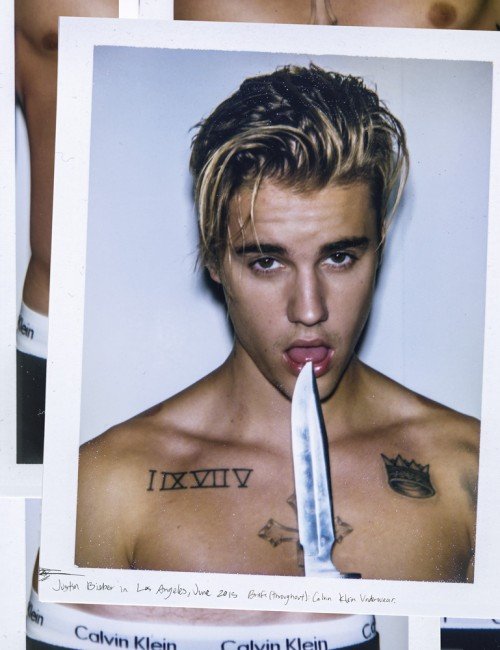 His handlers must find this picture sexy. It is also an allusion to self-destruction. 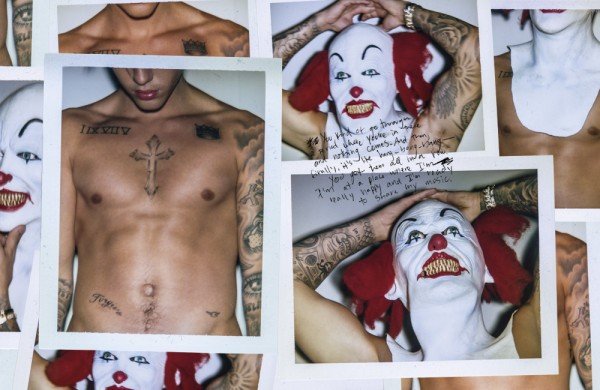 A naked Bieber wearing a creepy clown mask completes this disturbing photoshoot that looks as if it was taken on an unwilling teen that was abused and humiliated. 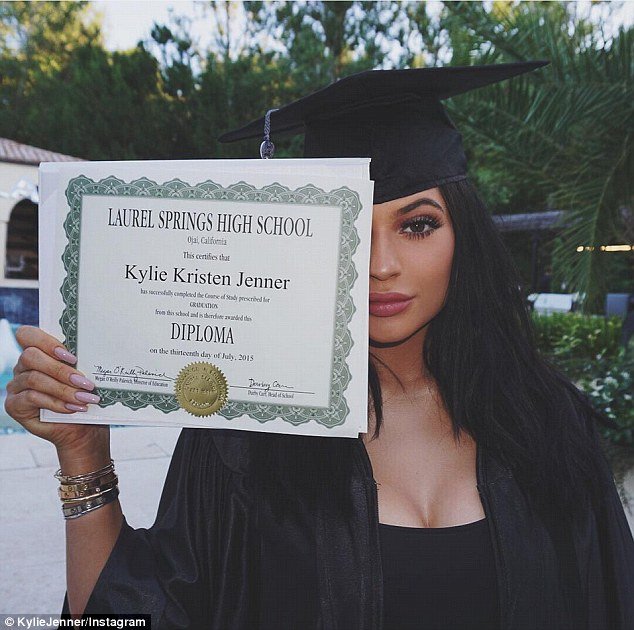 Speaking of Beta Kitten, Kylie Jenner recently graduated from high school. And this was the “official” pic of the graduation that circulated in the media and social networks around the world. It is a coded way of saying that her education is useless as an industry slave. But, hold on, this it might be coincidence. 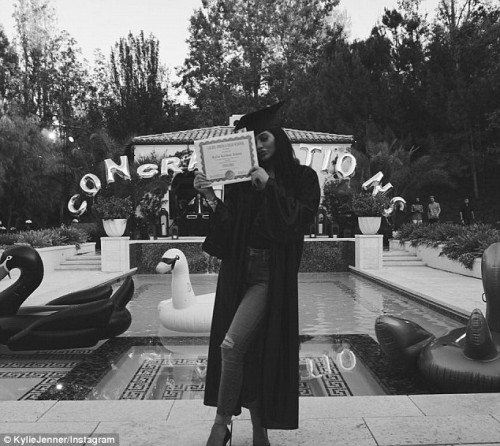 Nope, one-eye sign on purpose. What do you expect for one of the figureheads of the sexualization of minors agenda?

Media also heavily focused on the twerking going on at the graduation celebration of Kylie – which also emphasized the Beta Kitten function of the family. Khloe Kardashian wearing animal prints twerking on a checkerboard pattern is a good image to associate with this graduation. 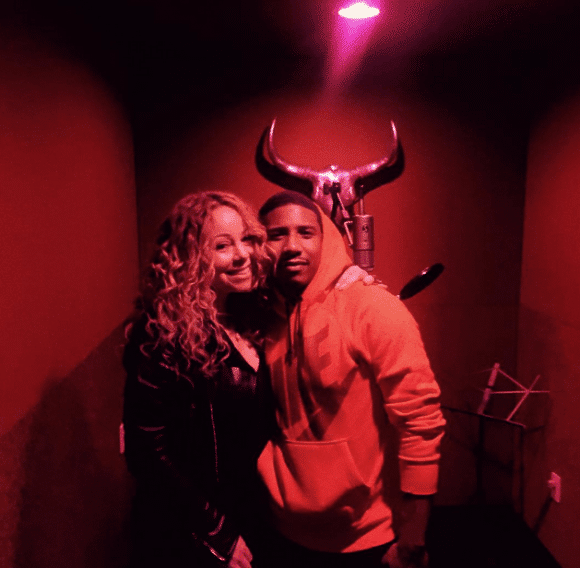 Mariah Carey inside a recording booth which is contains a big Baphomet head in the back. There is something ritualistic about signing to a Baphomet head and recording the results for mass consumption. 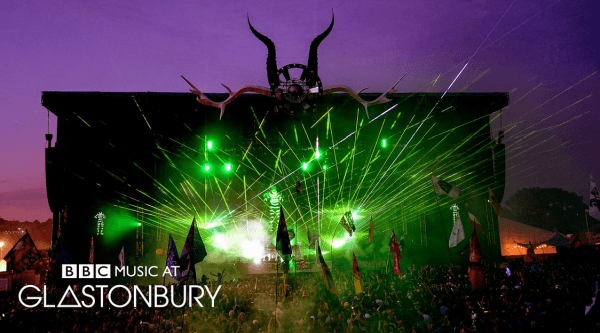 There is also something ritualistic about a bunch of young people dancing under a gigantic set of Baphomet horns  at the Glastonbury Festival. 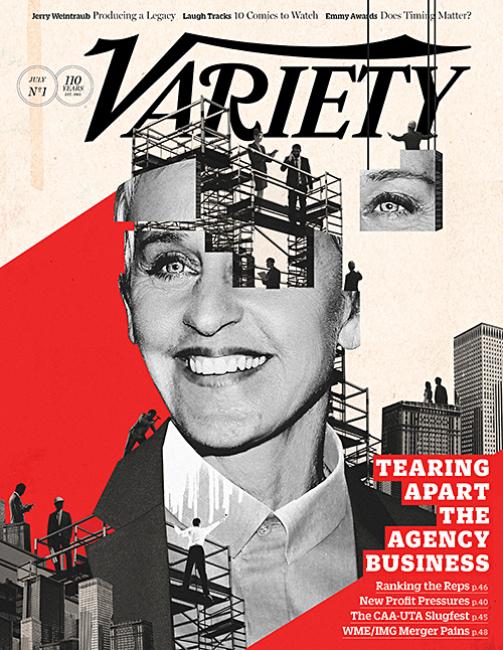 As usual, the one-eye sign was prominently featured on a whole bunch magazine covers in the past week – clearly reminding us who controls mass media. Here’s Ellen Degeneres on the cover of Variety with one of her eyes being physically removed from her head. 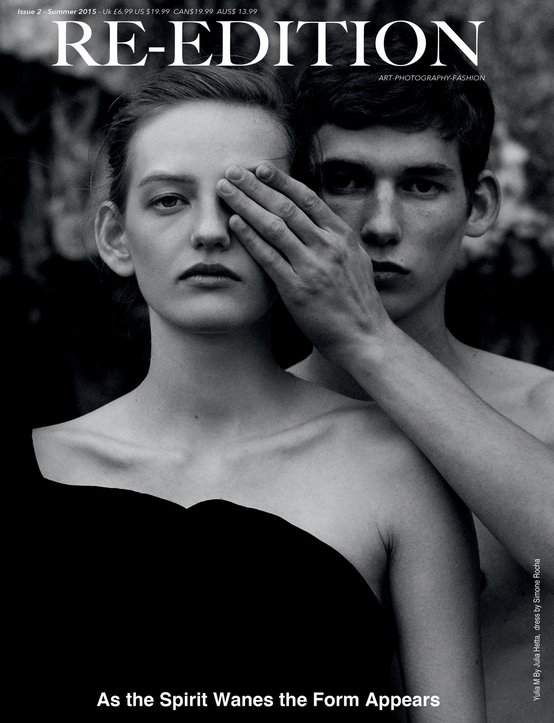 The cover of Re-Edition features a clear, undeniable one-eye sign on its cover. 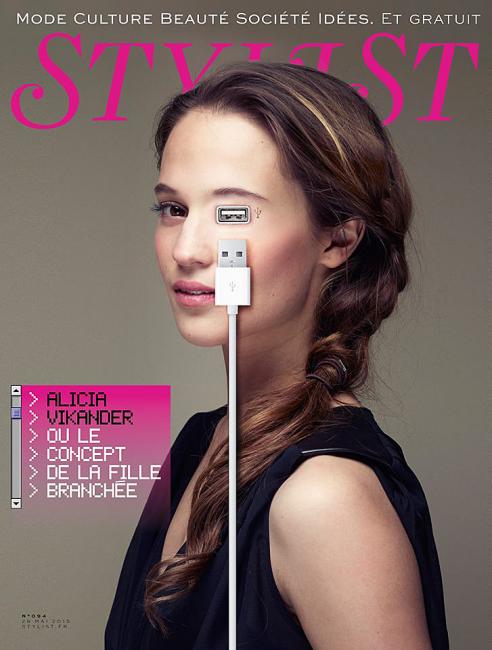 Alicia Vikander on the cover of Stylist has one eye replaced by a USB jack, which is somewhat awkward and creepy way of forcing the one-eye sign on yet another star. 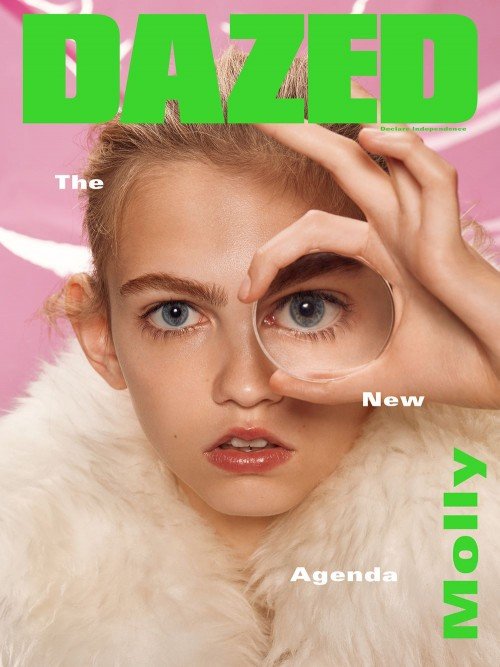 Molly Blair on the cover of Dazed with the one-eye sign. The words “The New Agenda” tell you what this sign is about. 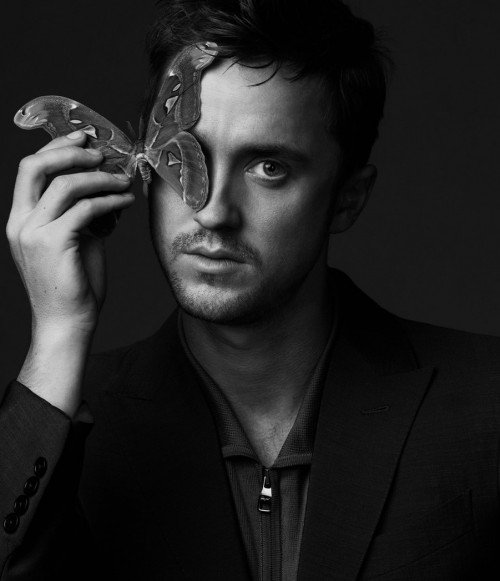 Tom Felton, from the Harry Potter movies, needs to do the one-eye sign with a butterfly (which represents Monarch Programming) to remain a celebrity. 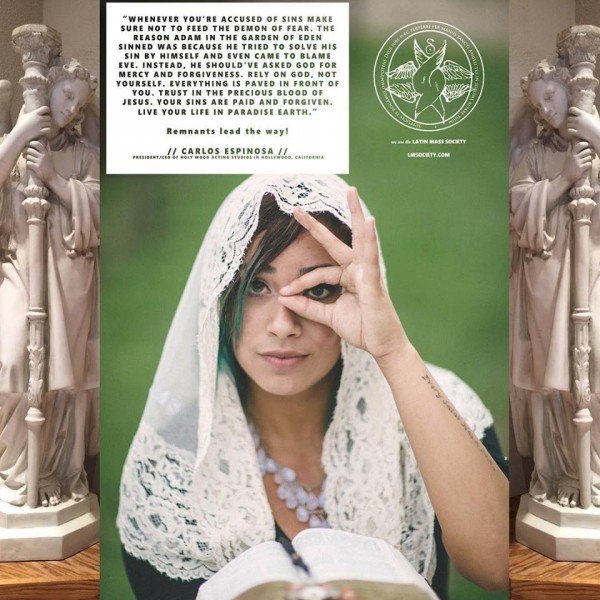 This ad for the Latin Mass Society is strange. It features a young woman doing the one-eye sign as she is reading the Bible Why? Above her is a quote from Carlos Espinosa who is said to be the “President / CEO of Holy Wood Acting Studios in Hollywood California”. This odd link with the entertainment business probably explains the one-eye sign. 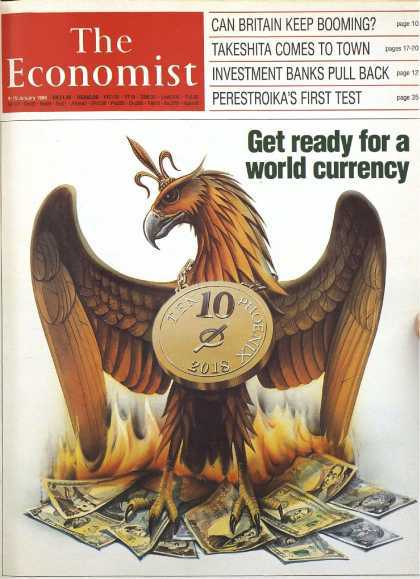 This cover of The Economist dates from 1988 and predicts the coming of a world currency in 2018. The cover is highly symbolic as the currency on the cover is called “Phoenix” – an all important symbol of the occult elite. The Phoenix rises from the ashes of all other currencies burning. 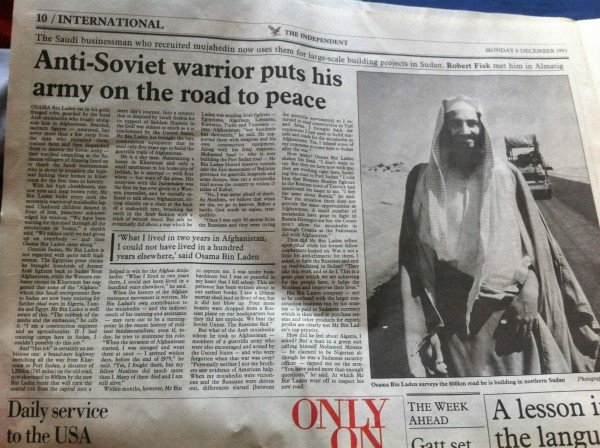 While we’re looking at old media, here’s a 1993 article from the Independent portraying Osama Bin Laden as a Soviet-fighting hero. Funny how the same CIA asset was used for all kinds of Agendas. 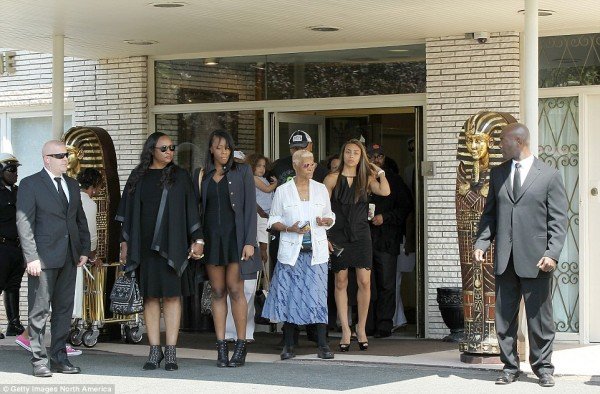 At the funeral of Bobbi Kristina Brown, a couple of Egyptian sarcophagi were placed at the entrance of the funeral home. 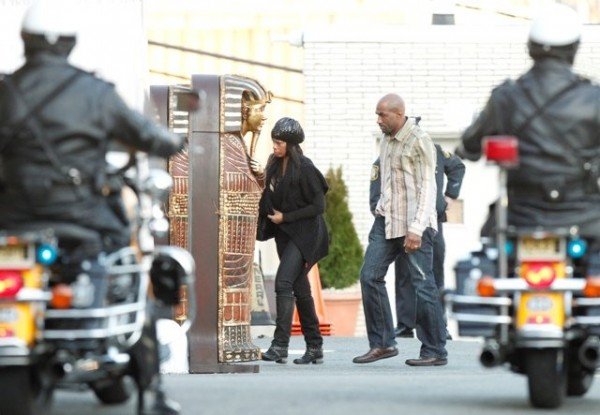 The same sarcophagi were present at Whitney Houston’s funeral, giving the funerals a ritualistic aspect, connected with the occult elite’s Egyptian magick.