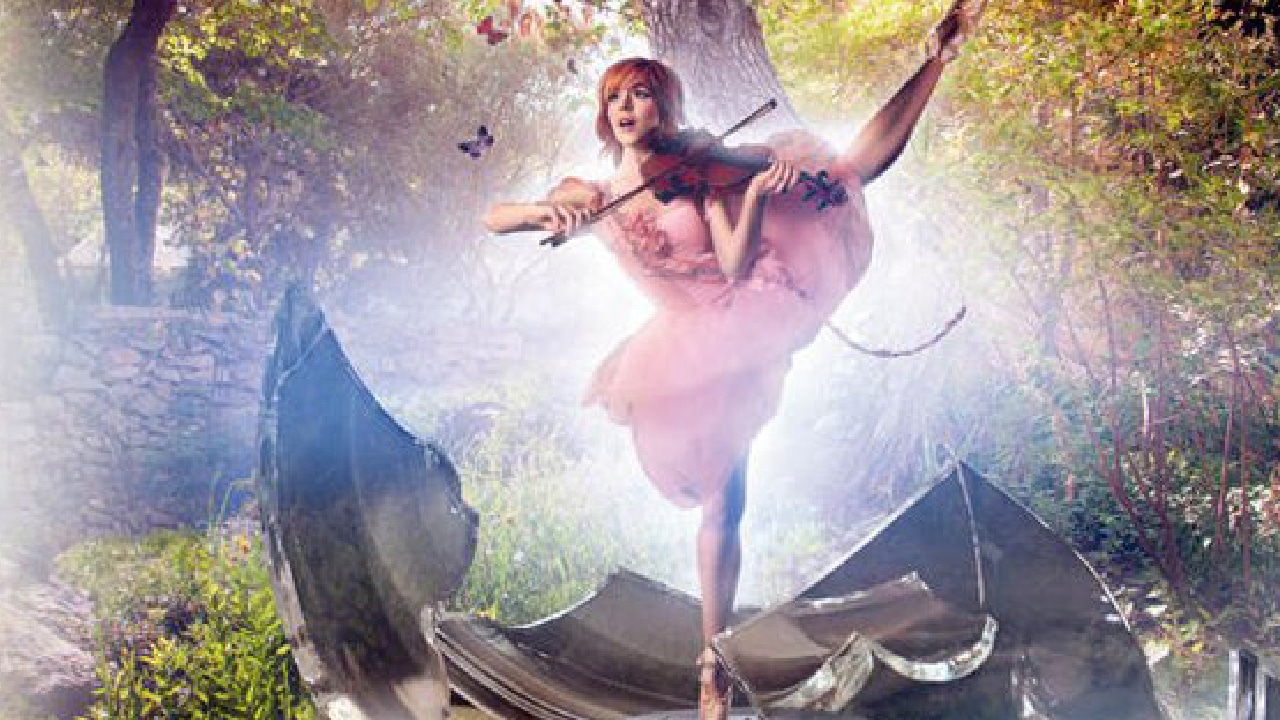 Lindsey Stirling is not your typical pop star because, for one, she’s a violinist. However, looking at the imagery of her video “Shatter Me”, we realize that there is not much differentiating her from other pop acts:  Her most successful single is indeed all about Monarch mind control. We’ll look at the symbolism of “Shatter Me”.

Shatter Me is proof that the Illuminati Agenda is not only imposed on big-time mainstream acts, but also on artists who appeal to “niche” markets. Lindsey Stirling is a violinist and a dancer who became a YouTube sensation with over four million subscribers and 600 million total views. In 2010 she was a quarter-finalist on the show America’s Got Talent, where she was known as the “hip-hop violinist”. Stirling is involved with the LDS Church and was featured in their “I’m a Mormon” campaign. She was also asked to perform in other important events organized by the LDS Church.

In 2013, she signed with Lady Gaga’s manager, Troy Carter, and released her second album, Shatter Me, in May 2014. The album reached the second position on the Billboard 200 and reached #1 in four categories: Top US digital album, top classical album, top dance/electronic album and top independent album.

Although Stirling is not a Lady Gaga-type artist, the symbolism of her video Shatter Me exploits the same themes as Gaga: Monarch mind control. In fact, it is one of the most blatant Monarch-themed videos in recent memory as it taps into pretty much all of the symbolism associated with it. Also, beyond the flashing of images and symbols, the entire story of the video is actually the story of a Monarch victim subject to trauma and dissociating from reality. (If you have no idea what I’m talking about, please read the article Origins and Techniques of Monarch Mind Control). Let’s look at the video.

Although the song is said to be about liberating oneself from fear (or something like that), one simply needs to read the title of the song to get its true meaning. Shatter Me is about an outside force destroying one’s true self, shattering it in multiple fragments like a broken mirror. When placed in the context of Monarch mind control, the meaning of the song becomes even more sinister.

The goal of a Monarch Programming handler is to cause trauma in a slave (through horrific means) that is so severe it causes the slave’s brain to trigger a last-resort defense mechanism: Dissociating from reality. This then allows the handler to fragment the core personality of the slave and to program new alter-personas within it. Through specific imagery and symbolism, the video of Shatter Me describes this horrendous process. There is absolutely nothing new in the imagery used in Shatter Me as it was used in countless other Monarch Programming-themed works featured on this site, such as Katy Perry’s Wide Awake and the movie Labyrinth.

The video begins with a classic image used to represent an MK slave: A music box ballerina. The image of a spinning ballerina often appears in Monarch-themed works mentioned on this site such as the movies Black Swan and Hide and Seek.

Trapped inside a globe, representing the controlled environment of an MK slave, Lindsey spins on herself.

While Lindsey is spinning and playing the violin, the singer Lzzy Hale is inside the “engine” of the music box, making sure it functions properly.

Surrounded by spinning gears, Lzzy makes sure that the ballerina spins smoothly.

report this adThe gear room represents the inside of Lindsey’s head, the internal world of the MK slave. Lzzy represents her core persona, her true self, the one with all of her memories, experiences, thoughts, and emotions.

Like most MK slaves, Lindsey has moments where she realizes what is happening to her and attempts to break out from her programming.

Lindsey attempts to free herself from her programming.

She tries to free herself from the globe but ends up on the floor, and finds her mirror shattered.

The symbol of the shattered mirror appears in almost every Monarch-themed video. It is often seen when the slave attempts to escape her programming. The broken mirror represents a point of no return as it is no longer possible for the slave to “go through the looking glass” back to reality.

After the failed attempt to escape, programming resumes. Lindsey holds a doll (which was not there before), meaning that her handler is programming into her a new alter persona.

Lindsey holds a doll, the symbol representing the creation of a new, artificially made persona.

To make sure we understand that this is not simply a doll but a new persona, we see Lzzy, who is inside Lindsey’s brain, creating a mechanical figure. We, therefore, understand that a new, mechanical, non-human persona will replace the core persona.

As Lindsey is being programmed by her handler, Lzzy creates a mechanical doll inside her head.

The video then lets us know that this is all about Monarch programming, and nothing else.

As programming is in progress, a blue Monarch butterfly flies above the globe, making it clear that all of these visuals symbolically represent the trauma, abuse, and programming of an MK slave.

Lindsey, who is gradually losing touch with reality, sees a small Monarch butterfly flying past her.

The butterfly then turns into a scary bat, which might represent her sadistic handler.

The butterfly is actually a scary bat.

MK slaves are so thoroughly drugged, confused, and manipulated that they sometimes end up viewing their abusers in a positive manner.

Then Lindsey literally shatters into pieces, representing the fragmenting of her core persona.

This scene implies that the MK slave was subjected to trauma so intense that her psyche became fragmented.

At the same time, Lzzy, who is inside Lindsey’s head, places the mechanical doll she created between two gears to disrupt its functioning. The alter persona created by the handler has finally taken over Lindsey’s psyche.

The video ends with a scene that appears positive and “liberating”. However, given the context of the video, it is actually quite disturbing.

At the end of the video, Lindsey is outside – meaning that she has totally dissociated from reality due to intense trauma.

Although Lindsey appears to be free, she is clearly not. The fact that her mirror and doll are still there tells us that Lindsey is actually at the same physical place, but her mind has dissociated – the state in which the slave handler can complete programming.

At the very end of the video, a Monarch butterfly appears on screen, letting us know, once again, that this was all about Monarch Programming. In short, through seemingly poetic symbols, the video told the story of an MK slave that is isolated and confined, then subjected to trauma until the core persona has completely shattered. A new alter persona is then created and the slave completely loses touch with reality and her own core persona. That’s pretty sad and grim … but what do you expect from a song entitled Shatter Me?

In classic MK-style duplicity, Shatter Me is said to be about liberating oneself’ from fear. but its symbolism communicates the exact opposite: The process of subjecting a slave to mind control. The video contains almost all of the symbolism associated with Monarch programming as described in numerous other articles on this site. Observing the music business as a whole, it is impossible not to see the pattern of recurring symbols appearing in similarly-themed videos.

Although Lindsey Stirling is not your typical, hyper-sexualized pop star, her video Shatter Me is proof that the Agenda seeks to reach people in all possible niches in order to create one, big, hegemonic, inescapable, MK culture. The same way Lindsey spins in a globe, watching butterflies passing by, we are surrounded by mass media, watching seductive images passing us by, not knowing they are actually ugly, vicious bats. It is up to us to (truly) shatter that globe of deceit and see reality for what it is.