Paper Magazine published a letter written by Kanye West in which he rebukes the fact that musicians are pinpointed as being “the Illuminati”, adding that “we don’t run anything”. Duh.

A few months after his wife’s big oily butt starred on the cover of Paper Magazine, Kanye West graces us with his timeless words of wisdom in the same publication. In his letter, Kanye describes his dabbling in the fashion world as an epic struggle everybody should care about, he compares himself to Steve Jobs several times and  then goes off for a few paragraphs about how he’s an inventor and an innovator. In short, the letter is the most Kanye West thing ever written.

Beyond his usual rant, Kanye also rebukes the fact some people called the Tidal press conference an “Illuminati moment”. 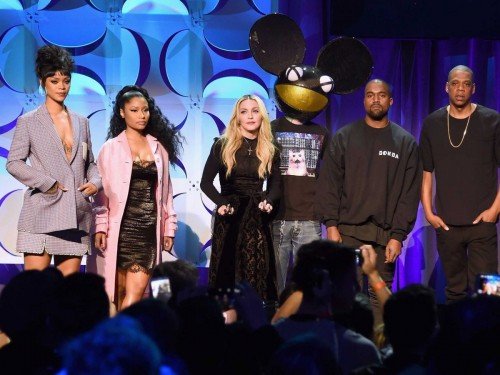 The awkward, star-studded conference promoting Tidal. You can see the enthusiasm in their eyes.

Launched by Jay-Z, Tidal is a streaming music service that users must pay for. Despite the unremarkable nature of the service, the PR surrounding it however describes is as a “revolution” and a “historic moment”. The ad campaign surrounding Tidal is a cringe-inducing gathering of rich people complaining about how they want more of your money.

This ad unites some of the biggest industry puppets in the world – “artists” who have been paid to push the elite’s Agenda for years. For that reason, some people (even Complex magazine) half-jokingly called the conference an Illuminati reunion.

Kanye West took offense to that and felt the need to clarify something important : Tidal is not the Illuminati. He then proceeds to explain the obvious :

“I heard a comment — a joke — about the Tidal press conference being an Illuminati moment. If there was actually an Illuminati, it would be more like the energy companies. Not celebrities that gave their life to music and who are pinpointed as decoys for people who really run the world. I’m tired of people pinpointing musicians as the Illuminati. That’s ridiculous. We don’t run anything; we’re celebrities. We’re the face of brands.”

Kanye then explains how his peers are puppets subjected to the industry’s will.

“We have to compromise what we say in lyrics so we don’t lose money on a contract. Madonna is in her 50s and gave everything she had to go up on an award show and get choked by her cape. She’s judged for who she adopts. F*ck all of this sensationalism. We gave you our lives. We gave you our hearts. We gave you our opinions!” 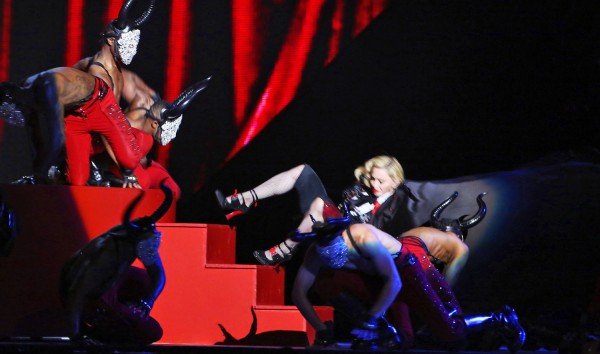 Madonna “choked by her cape” at the Brit Awards while trying to do what the elite requires her to do in order to stay relevant.

In short, Kanye is right. Tidal is not the Illuminati. But nobody with half a brain actually believed that. Most of the artists associated with that campaign are industry pawns who do as they’re told and who barely control anything relating to their careers. They were most likely forced to appear in that universally hated ad campaign. Record companies create artificial hype around their artists, puts them under the spotlight and uses them to push various messages.