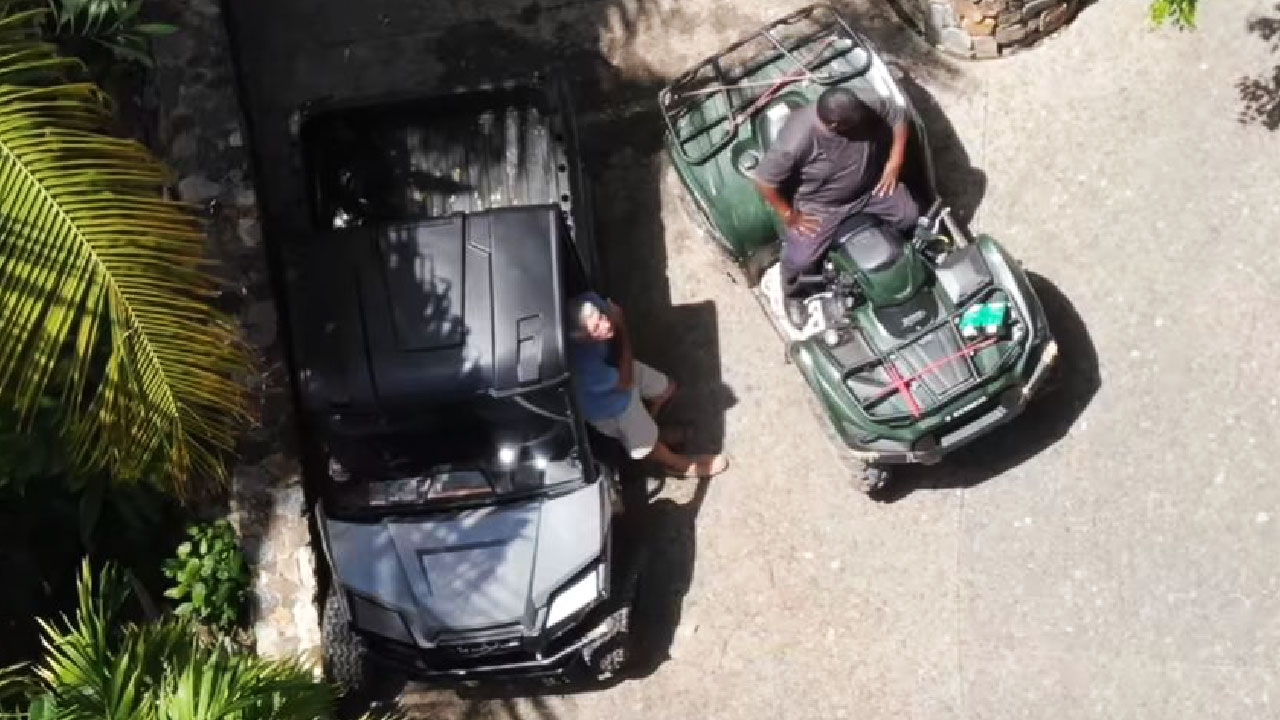 Ever since Jeffrey Epstein’s highly suspicious death in a maximum-security prison, things only got more suspicious. Although the autopsy officially concluded that the cause of death was suicide, a steady flow of facts and revelations are strongly hinting towards a massive cover-up.

First, it was recently revealed that two cameras filming the jail cell of Jeffrey Epstein at the time of his death were “broken” and the recordings were deemed “unusable” by authorities.  Second, two guards allegedly “slept through” scheduled checks on Epstein and falsified records. Third, Frenchman Jean-Luc Brunel, the model mogul suspected of being a Jeffrey Epstein’s sex trafficking pipeline in Paris, “has disappeared like a ghost without a trace”.

While mass media has been carefully filtering some of this information while ignoring other facts, the Rusty Shackleford YouTube channel has been providing a raw, unfiltered source of information by posting, on a regular basis, drone footage of Epstein Island and its surroundings.

The footage captured in the past weeks reveals that there are strange things happening on the island. Here are some examples.

Considering the fact that Litte Saint James was the site of heinous crimes involving powerful people, one would expect the island to be treated like a crime scene that is completely closed off to non-investigators. That is not what is happening.

After a crime scene has been discovered, it is important that measures are taken to secure and protect the scene from contamination. In order to maintain the integrity of the scene, law enforcement must take action to block off the surrounding area as well as keep track of who comes in and goes out. By taking these precautions, officers can ensure that evidence that is collected can be used in court. Evidence that has become contaminated, tampered with, or mistreated can pollute the scene and cause a case to be thrown out of court.
– Wikipedia, Crime Scene

Two weeks prior to the FBI raids on Epstein Island, a drone filmed a team of workers doing heavy construction work on the island using tractors, bulldozers and tons of new material. 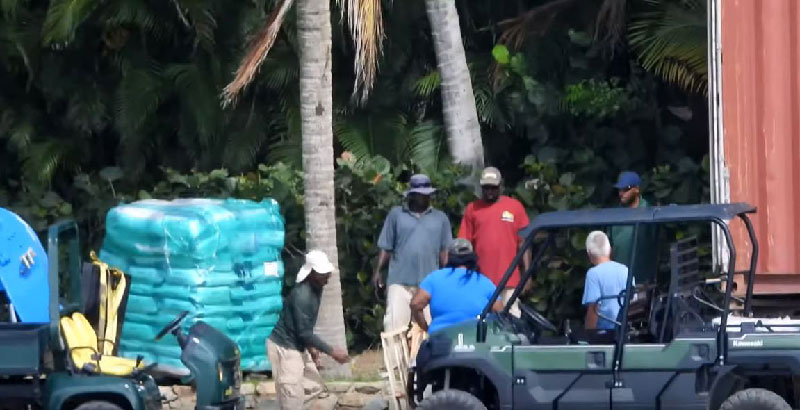 This footage was filmed on July 30th, 10 days before Epstein’s death and 12 days before the FBI raids. We can see construction workers, heavy machinery and bags of material, possibly concrete.

This footage was taken a few weeks after Epstein’s arrest. Lots of trash being thrown out, including several mattresses and box springs. Could there be incriminating evidence in there?

Several vehicles on the island also keep moving around – including an ambulance that bears the letters L.S.J. (Little Saint James). Why is there even an ambulance on an island that has no hospital?

In July, the ambulance was parked on the roof of a building.

A few weeks later, the ambulance was moved to a different spot.

After Epstein’s death and after the FBI raids, the island was still bustling with activity.

This footage from August 30th shows that the Island is still being maintained by a team of workers.

Considering the fact that Epstein is dead, why is there still maintenance on the island and who is paying these workers? Are the checks coming from the $577 million trust fund created by Epstein two days before his death – with anonymous beneficiaries?

The drone filmed an older white man who doesn’t appear to be a worker talking with another man.

A great number of comments on the YouTube video state that this man looks suspiciously like … Jeffrey Epstein … who died a couple of weeks prior. At one point, that man looks up and notices the drone. He then lingers for a couple of seconds and hides inside his truck. 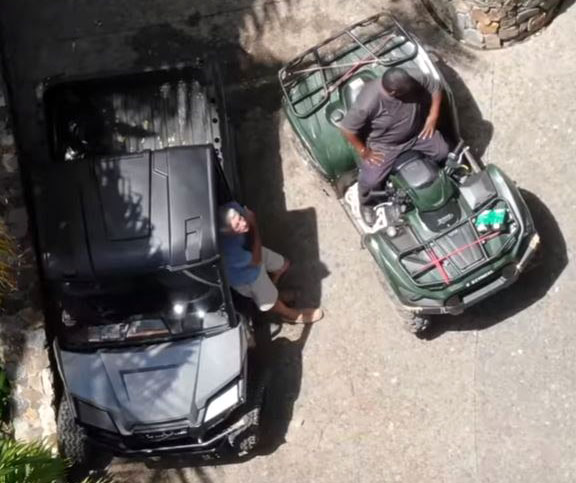 Drone footage captured in the past weeks also captured never-seen images of the infamous “temple”. 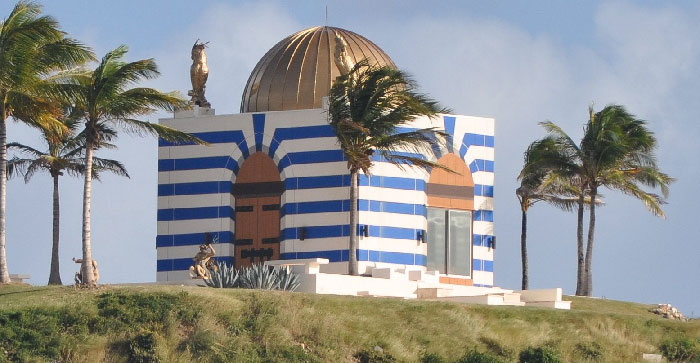 The temple in 2017. The golden dome and cockatrice are now gone.

There’s been lots of speculation concerning the strange temple on Epstein Island. Built on a 60 feet elevation, the temple is believed to be sitting on a network of underground tunnels. Recently released drone footage took some close-up shots of the temple, revealing several strange details.

First, the main “door” of the temple is actually painted on. 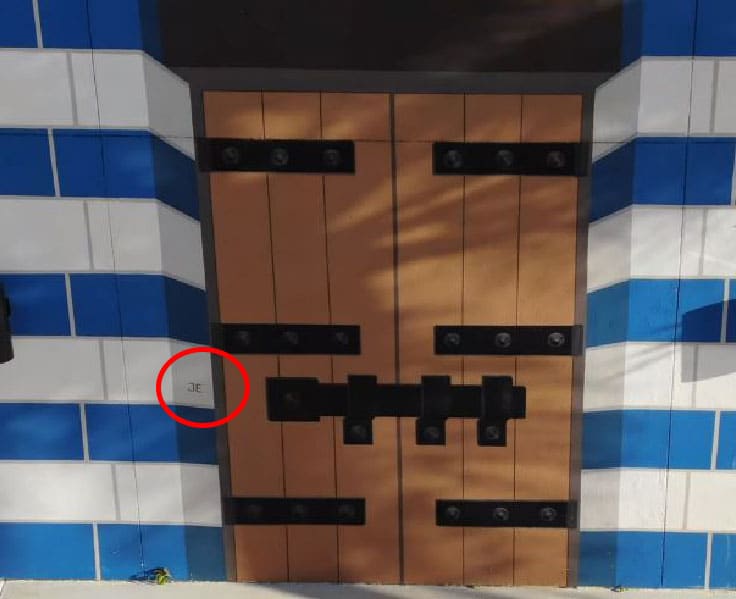 The door on the Epstein temple.

On the door is painted a medieval lock which is designed to keep people locked inside the temple. Is this a hint into what was actually going on inside?

On the left of the door are the letters JE – the initials of Jeffrey Epstein. 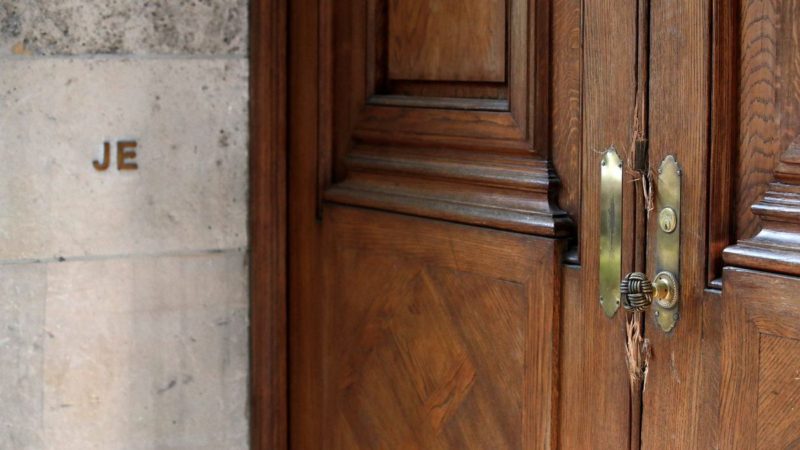 The same initials can be found on the left of the door of Epstein’s NYC mansion.

While mass media sources have been claiming that the temple was actually a gym, footage filmed inside the temple reveals that it is definitely not a gym. 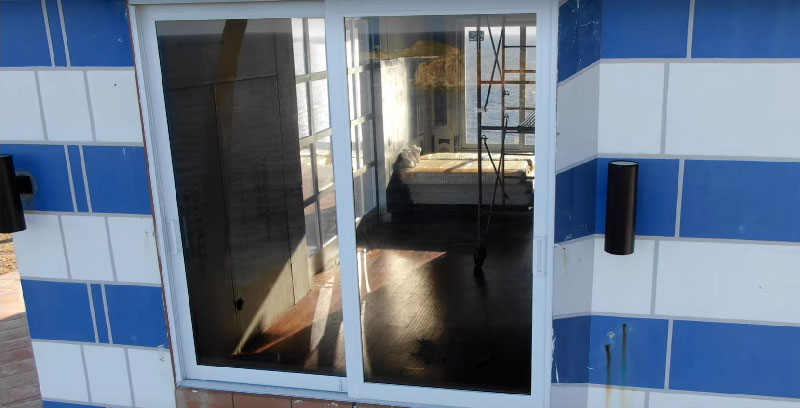 Inside the temple are several mattresses and scaffolding. No gym equipment in sight.

Footage from the other window shows a closer shot of the mattresses (which are wrapped in plastic).

Using color correction, the drone was able to provide a clearer view of what’s inside the mysterious room.

As the drone films upwards, we can see a bookshelf, an ornamental column, and some wiring.

Once again, we have clear proof that this is not a gym. The fact that mass media has been propagating this piece of fake news is telling. And, considering the fact that everything about this temple is highly symbolic, what we’re seeing here is also highly symbolic.

Although we cannot see the other side of the bookshelf, we can assume that there’s a second pillar on the other side. As we know, twin pillars are a staple in Masonic symbolism. Furthermore, the twisted design of these pillars is significant: They’re called Solomonic columns.

The spiral shape, common in nature, has adorned buildings since the dawn of recorded history. According to legend, spiral columns ornamented the Temple of Solomon in Jerusalem.
– thought.co, What is a Solomonic Column?

Masonic lore, ritual, and symbolism are heavily based on the legend surrounding the Temple of Solomon. Combined with the Masonic sundial at the center of Epstein island, there’s a clear “occult elite” pattern emerging from this place. 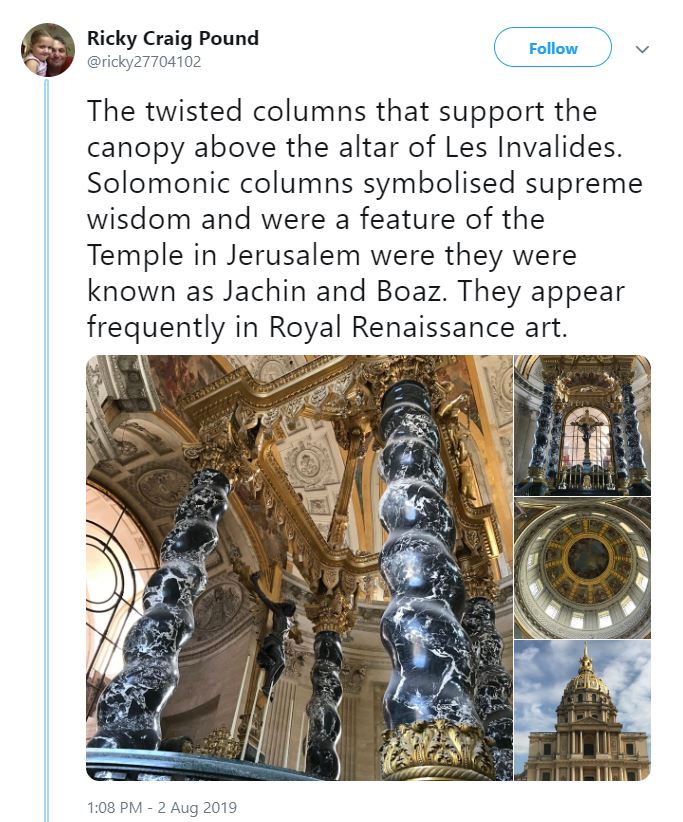 A Freemason explaining the importance of Solomonic columns.

On August 12th, the drone captured images of the FBI raid on Epstein island as it was happening. The first question one might ask is: Why did the FBI raid the island two days after the death of Epstein and not way before? Why did they allow people to move and work freely on the island beforehand?

The other question one might ask is: What are they doing on this footage?

An agent stands inside a room with computers and other equipment wrapped and, apparently, ready to be shipped.

Then other agents enter the room. Notice that there are several NYPD agents investigating this island in the Bahamas.

Once the agents realized that a drone was filming them, they covered up the window.

Why so much secrecy?

The drone footage taken over the last few weeks prove that heavy construction work has taken place on Epstein Island only days prior to the FBI raids. Considering the fact that these people were paid by Epstein, there is a distinct possibility that they were ordered to destroy evidence and bury whatever needed to be buried. When the authorities finally raided the island (two days after Epstein’s death), they made it obvious that they did not want to be filmed.

Not unlike what happened at the Metropolitan Correctional Center on the day of Epstein’s death, authorities have been displaying a constant pattern of “purposeful carelessness” throughout the Epstein debacle. Despite the fact that the island was a known and well-documented haven for child abuse at the hands of the world’s more powerful people, the investigation surrounding it is, to say the least, sluggish. In short, we are witnessing the occult elite covering up its tracks and burying the Epstein case under a pile of literal concrete.

FacebookTwitterSubscribe
Related Topics:featuredjeffrey epstein
Up Next

Scientist Proposes Cannibalism to “Save the Climate” on Swedish TV