A video surfaced online of a strange ceremony taking place at CERN where hooded individuals gathered around the statue of Shiva and staged the ritual “stabbing” of a woman dressed in white.

The video, shot from a nearby building, shows several individuals dressed in black hoods, entering the main square of the world’s top physics lab and partaking into an occult ritual culminating into the stabbing of a woman as a “human sacrifice”.

The ritual took place in front of the statue of Shiva. 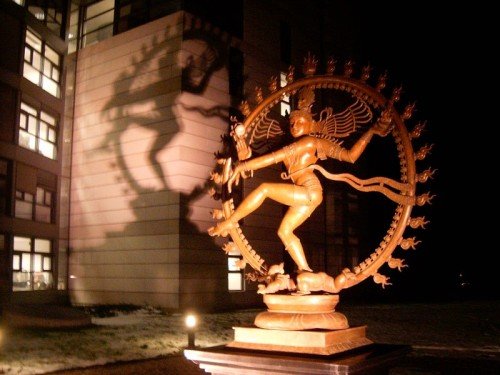 This statue of the Hindu god Shiva stands at the entrance of CERN, where the large hadron collider was recently reactivated. Shiva is also known as “The Destroyer” – his duty is to “destroy worlds at the end of creation and dissolve them into nothingness”. This is a strange addition to a science building.

Earlier this year, Switzerland hosted another massive occult ritual: The opening ceremony of the Gotthard Base Tunnel in Switzerland (read my article about it here). 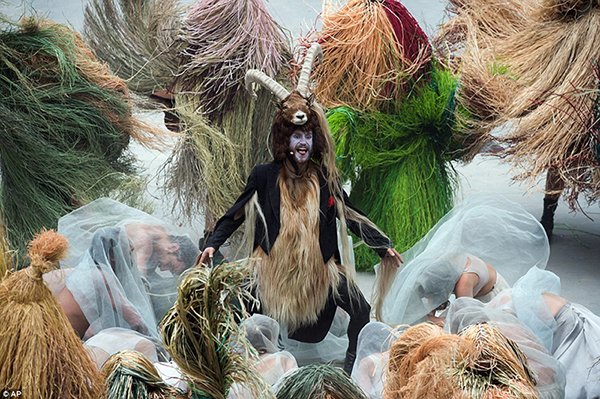 The ceremony culminated with the mass worship of a goat man.

A CERN spokeswoman confirmed Wednesday that an investigation has been launched following the release of the video filmed at night on its Geneva campus. In an e-mail sent to AFP, the spokeswoman wrote:

‘These scenes were filmed on our premises, but without official permission or knowledge. ‘CERN does not condone this type of spoof, which can give rise to misunderstandings about the scientific nature of our work. The ‘investigation’ under way was an ‘internal matter’.
– Mail Online, ‘Human sacrifice’ ceremony at Geneva’s CERN laboratory – involving cloaked men ‘stabbing a woman’ at night – is investigated by chiefs at world-famous science centre

The spokeswoman however confirmed that the area where the ceremony took place was highly secured and that the people in the video most likely carried CERN IDs.

‘CERN IDs are checked systematically at each entry to the CERN site whether it is night or day. ‘CERN welcomes every year thousands of scientific users from all over the world and sometimes some of them let their humour go too far. This is what happened on this occasion,’
– Ibid.

While some state that the video is “fake”, a “prank” and product of young people doing it for the “LULZ”, one cannot deny these facts: (1) The ritual actually took place (2) At night (3) In a highly secured area at CERN (4) By people who had CERN IDs (5) Who took the time to obtain necessary wardrobe (6) And stage this ceremony. Why was someone randomly filming the CERN square before any of this even happen? That is something to look into.

No matter what were the actual intentions behind this ritual, the end result is the same: It is yet another strange, ritualistic event associated with CERN.