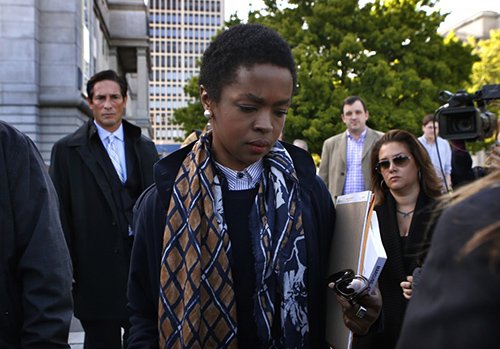 The name of Lauryn Hill’s breakout album was The Miseducation of Lauryn Hill but it now appears that the powers that be would like her to record a new album called The Re-Education of Lauryn Hill. After appearing in court for tax evasion, Hill was sentenced to three months in jail PLUS she must attend “counseling” due to her “conspiracy theories”.

According to the IBTimes, Hill told the court: “I am a child of former slaves who had a system imposed on them. I had an economic system imposed on me.” Furthermore, Hill also believes that artists are being oppressed by (what the article calls) “a plot involving the military and media”. Because of these statements, Hill was ordered to undergo “counseling”, which is a way of saying that she is mentally ill and that she needs some sort of re-programming session regain “sanity”.

In 2012, Hill published a thoughtful letter describing the corruption, the oppression and the control of the music industry and her desire to escape it.  In one part of the letter, Lauryn states

“It was this schism and the hypocrisy, violence and social cannibalism it enabled, that I wanted and needed to be freed from, not from art or music, but the suppression/repression and reduction of that art and music to a bottom line alone, without regard for anything else.  Over-commercialization and its resulting restrictions and limitations can be very damaging and distorting to the inherent nature of the individual.  I Love making art, I Love making music, these are as natural and necessary for me almost as breathing or talking.  To be denied the right to pursue it according to my ability, as well as be properly acknowledged and compensated for it, in an attempt to control, is manipulation directed at my most basic rights!  These forms of expression, along with others, effectively comprise my free speech!  Defending, preserving, and protecting these rights are critically important, especially in a paradigm where veiled racism, sexism, ageism, nepotism, and deliberate economic control are still blatant realities!!!”

(See my article entitled Lauryn Hill’s Tumblr Letter on the Music Business for the full letter).

Despite what mainstream media reports, Hill is not mumbling incoherent “conspiracy theories” but is rather speaking the truth. Her statements are a result of her first hand experience within the industry and her desire to not be part of its madness. Hill’s “theories” are simply an intelligent person’s clear analysis of a situation.

However, as American society turns into a real life version of the novel 1984, speaking the truth is increasingly considered to be a mental illness – one that needs to be treated and fixed. Does free speech still exist if saying the wrong words leads to a mandatory visit to a “mind doctor”?

Related Topics:lauryn hill
Up Next