Judge Scalia died at a gathering of the International Order of St. Hubertus, an elite secret society that dates back to the 1600s.

Supreme Court Justice Antonin Scalia, who was mostly known for his ultra-conservative views on a variety of issues, was found dead on February 12th in a luxury ranch in Texas. The context and the circumstances of his death are rather perplexing.

For one, Scalia was members of the secret society International Order of St. Hubertus – an exclusive elite hunting fraternity dating from the 1600. While the fraternity’s official mission is about loving nature, animals and whatnot – it goes far deeper that this. The Order of St. Hubertus is not a society of “elite hunters” – it is an elite secret society that gathers under the pretext of hunting. Members of the society hold titles similar to those found in Freemasonry such as Grand Master and Knight Grand Officer.

After Scalia’s death Feb. 13, the names of the 35 other guests at the remote resort, along with details about Scalia’s connection to the hunters, have remained largely unknown. A review of public records shows that some of the men who were with Scalia at the ranch are connected through the International Order of St. Hubertus, whose members gathered at least once before at the same ranch for a celebratory weekend.

Members of the worldwide, male-only society wear dark-green robes emblazoned with a large cross and the motto “Deum Diligite Animalia Diligentes,” which means “Honoring God by honoring His creatures,” according to the group’s website. Some hold titles, such as Grand Master, Prior and Knight Grand Officer. The Order’s name is in honor of Hubert, the patron saint of hunters and fishermen.

After Scalia’s death, Poindexter told reporters that he met Scalia at a “sports group” gathering in Washington. The U.S. chapter of the International Order of St. Hubertus lists a suite on M Street NW in the District as its headquarters, although the address is only a mailbox in a United Parcel Service store.

The International Order of St. Hubertus, according to its website, is a “true knightly order in the historical tradition.” In 1695, Count Franz Anton von Sporck founded the society in Bohemia, which is in modern-day Czech Republic.

The group’s Grand Master is “His Imperial Highness Istvan von Habsburg-Lothringen, Archduke of Austria,” according to the Order’s website. The next gathering for “Ordensbrothers” and guests is an “investiture” March 10 in Charleston, S.C.

– The Washington Post, “Justice Scalia spent his last hours with members of this secretive society of elite hunters”

Here are some images from a gathering of the International Order of St. Hubertus at the Windsor Court Hotel in New Orleans. 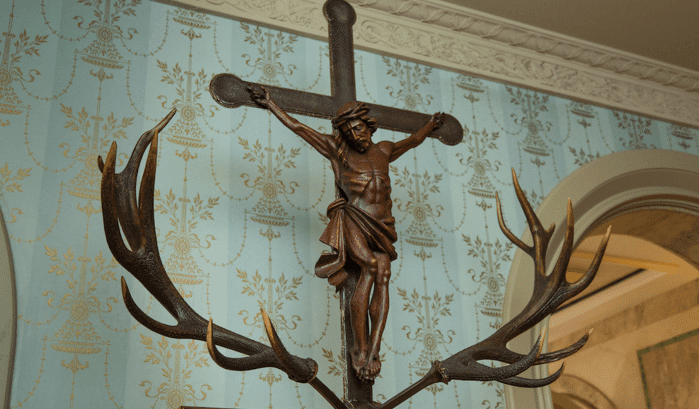 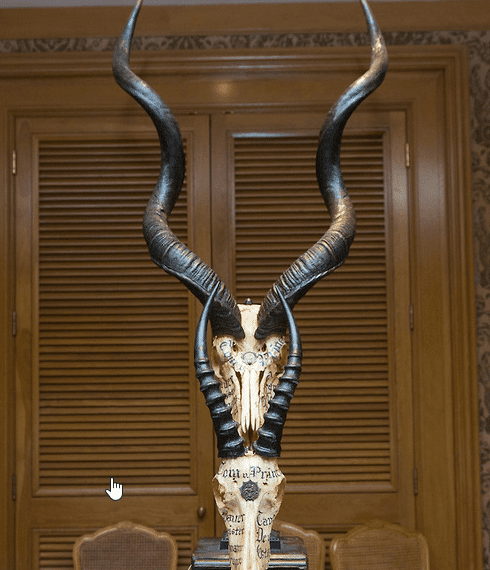 A display of horned skulls with cryptic inscriptions on them. 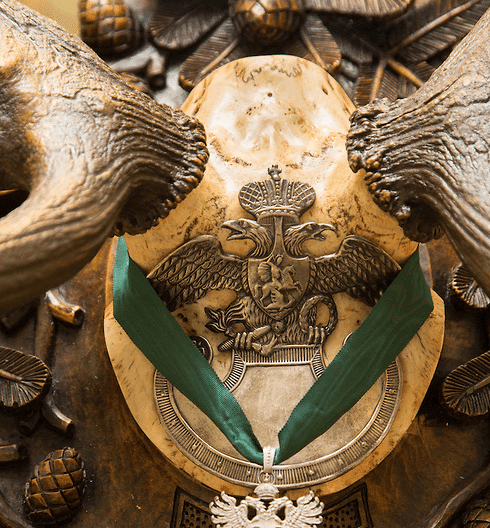 Another skull is adorned with two double-headed eagles – an important symbol in Freemasonry. 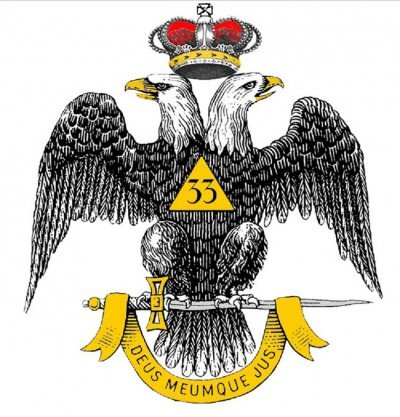 This Masonic emblem of a double-headed eagle topped by a crown represents the 33rd Degree – the highest degree achievable in regular Freemasonry.

The Order is therefore a classic example of an occult secret society from the 17th century that draped itself in Christian imagery to avoid persecution and remain secret.

The ultimate proof of the Order’s connection with the occult elite is the fact that its American branch was founded at the Bohemian Grove in San Francisco.

The society’s U.S. chapter launched in 1966 at the famous Bohemian Club in San Francisco, which is associated with the all-male Bohemian Grove — one of the most well-known secret societies in the country.
– Ibid.

As you might know, the Bohemian Grove is the most prominent gathering place of members of the elite who partake in dark occult ritual drama. This private club of influential men still meets annually north of San Francisco and uses this symbolic ritual to kick off its summer retreat. The ceremony involves burning a mummy-like effigy named Care at the foot of the group’s mascot: a 40-foot-tall concrete owl. 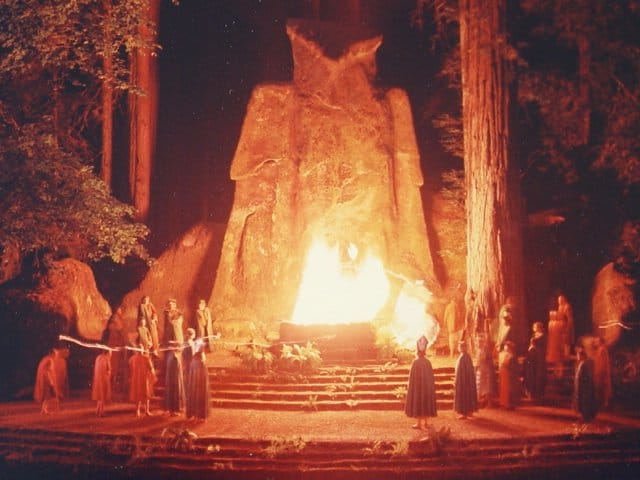 “The Cremnation of Care” at the Bohemian Grove. The ceremony involves the poling of a small boat across a lake containing an effigy of Care (“Dull Care”). Dark, hooded individuals receive the effigy from the ferryman which is placed on an altar and, at the end of the ceremony, is set on fire. 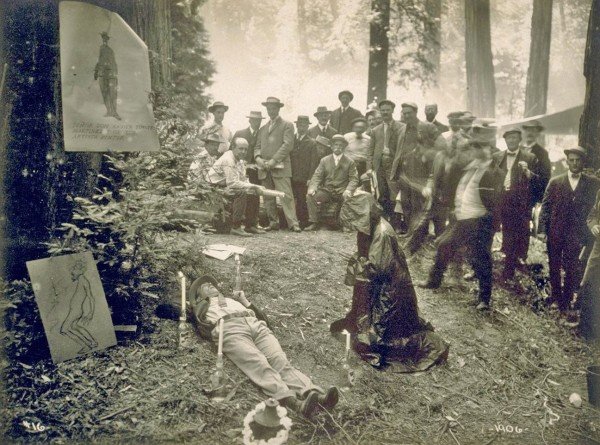 To purge himself of worldly concerns, a member of the elite Bohemian Club participated in a 1915 Cremation of Care ceremony – complete with candles and a robed and hooded comrade to guide him.

So this is where the Order of St. Hubertus was launched in the U.S. This reveals everything you need to know about its connection to the occult elite.

Those who attempted to investigate the circumstances of the death of one of the most prominent figures in the country found themselves confronted with a lot of secrecy, denials and “I don’t know” ‘s.  For instance, his death was promptly pronounced as natural – without proper examination of the body.

Scalia died in his sleep on the night of February 12 or the morning of February 13, 2016, following an afternoon of quailhunting and dining at the Cibolo Creek Ranch in Shafter, Texas as the guest of John B. Poindexter, owner of the ranch.

After Poindexter discovered the body, he called the Presidio County sheriff’s department to ask for the number of the U.S. Marshal’s Service to report a death. Poindexter was reluctant to say who had died to Sheriff Danny Dominguez, who had the Marshal’s Service call the ranch owner, and both the marshals and the sheriff went to the ranch, where they were shown Scalia’s body. Dominguez instructed his office to call local justice of the peace Juanita Bishop but she was out of town. County Judge Cinderela Guevara pronounced Scalia dead of natural causes. She did not see the body, which under Texas law is not required, nor order an autopsy. Bishop, as well as David Beebe, another justice of the peace, later disagreed with the decision not to order an autopsy for Scalia. Guevara, who conferred by telephone with Scalia’s physician, stated that she made the determination to pronounce Scalia dead from natural causes after being told by county sheriff Dominguez on the scene that “there were no signs of foul play” and that Scalia “was having health issues”; Scalia’s physician, Rear Admiral Brian P. Monahan, told her Scalia had a history of heart trouble, including high blood pressure, and was recently deemed too weak to undergo surgery for a torn rotator cuff. According to Sunset Funeral Home director Chris Lujan, Scalia’s family also declined to have an autopsy performed after his body was transferred to his El Paso funeral home, prior to its return to Fairfax, Virginia.
– The Big Story, “Texas judge disclosed details about Scalia’s health”

Law enforcement and the FBI are also remaining extremely secretive about the facts surrounding the Order and Scalia’s death.

Law enforcement officials told The Post that they had no knowledge of the International Order of St. Hubertus or its connection to Poindexter and ranch guests. The officials said the FBI had declined to investigate Scalia’s death when they were told by the marshals that he died from natural causes.
– Washington Post, Op. Cit.

In short, one of the nine Judges of the highest federal court of the United States died during the gathering of an occult secret society. That death was promptly pronounced to be of natural causes. No autopsy was performed on the body and no investigation took place. Scalia therefore could have been poisoned (for whatever reason) and nobody would ever find out. No matter what the case may be, this story exemplifies why the occult elite identifies to the owl of the Bohemian Grove: It works in darkness, away from the prying eyes of the rest of the world.

FacebookTwitterSubscribe
Related Topics:secret society
Up Next

Kesha Forced to Work With Dr. Luke Despite Allegations of Sexual Abuse